Friends!  It’s been a busy, magical weekend for us!  In the past four days we’ve talked to Oddisee, DJ Qbert and Saul Williams.  I can’t believe it.

What I’m loving most about these meetings is realizing that we’re all just people.  We wrote about this in regard to Homeboy Sandman a few weeks back, but I am seriously enjoying the continual confirmation.  We’re all just regular folks doing our thing…

Another thing I’m loving about this experience is that we’re learning at an exponential rate.  Though we’ve only had this site for a little bit, we’re constantly talking about and refining our purpose for it.  Our purpose keeps growing (soon we’ll have a different template with an “about” page so we can explain this in detail).. This weekend, in our conversation with the legendary, dare I say, “Master” Qbert, I realized another reason for creating this blog:  to empower people.

We’re all too quick to give up our power.  We do it all day long in many different ways, food being a major force.  Out of convenience we choose “quick” things or “easy” things and end up suffering in the long term.  One of the ideas that came up through the conversation with Oddisee is the notion of the body as a temple.  We, The Kitchen Mix, believe in that.  It is a temple.  It’s where you live out you’re one sacred life… It’s critical to keep that in mind.

Another place where we give up power is in regard to medicine (which goes hand in hand with food).  The majority of people just want to be told what to do.  “I’m sick doc, what do you want me to do?”  Well, I think we should first be asking ourselves, “I’m sick, what should I do?” because chances are you can probably treat yo self.   Now, don’t get me wrong – I completely understand the fear – the driving force behind giving up our power – but it’s time to cultivate courage.  Just a few weeks ago I woke up with “pink eye,” or as I prefer to call it (the official term), conjunctivitis.  YIKES.  My first instinct was to go to the doctor.  I went so far as to call for an appointment, but because I see a naturopath I knew I’d be out $75.  Yea, that shit is expensive (but worth it).  So instead I took a deep breath, told the receptionist “nevermind” and took matters into my own hands.  It turns out chamomile helps get rid of pink eye.  In one day my symptoms were gone and it really didn’t cost me anything because I already had chamomile on hand.  POWER to the chamomile!  Seriously…

As you may or may not know, we’re parents to two young children.  Being a parent to a sick child is CRAZY ya’ll. But it’s less crazy when you feel (at least somewhat) empowered.  When anyone in our household falls ill (I mean ill as in not well, because we’re some sick, ill fools) the first thing we reach for is the homemade chicken stock.  Those “Chicken Soup for the Soul” books exist for a reason.  There’s something truly therapeutic about chicken soup.  It really does work wonders.

The best part is that it’s simple to make – though, I’m not gonna lie, I can’t stand the clean up – and you can freeze it for future reference.  Campbells ain’t got shit on broth made at home, with love and from clean ingredients. 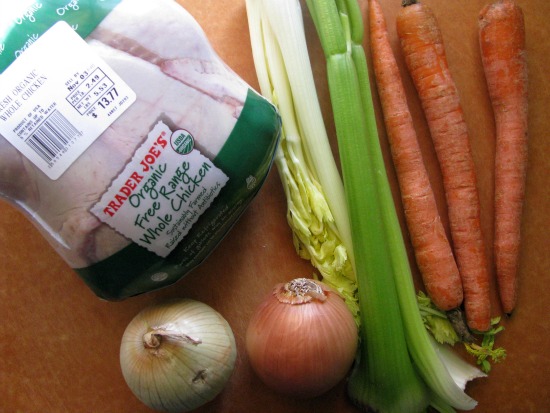 There are many folks that talk about the value of homemade broths, but most of what we’ve learned came from Sally Fallon and her cookbook Nourishing Traditions.  Which leads to a good point:  traditions are important.  My older boy is already accustomed to some soup when he’s not feeling well, in fact – he asks for it.  And despite the fact that he’s experienced really high fevers, even up to 103 sometimes, we’ve never paid an ER visit.  I thank God for that.  I don’t take it for granted and I’m not trying to be a snob about it.  I’m just saying that chicken soup, love, lots of rest and careful observation have been enough to return us to homeostasis, to balance, every time we’ve had a problem.

As stated best by Homeboy Sandman (a quote I’m sure to return to over and over), “food is important.”

So please, make a giant pot of this stock and have it ready for when you’re under the weather.  With this stock you can make any soup you want.  I usually add simple veggies like onions, carrots and celery with maybe a little brown rice.  Some garlic and cayenne go a heck of a long way (careful with the cayenne, especially with kids), and most recently – thanks to my recent herb studies – astragalus.  Astragalus is the bomb, yo. 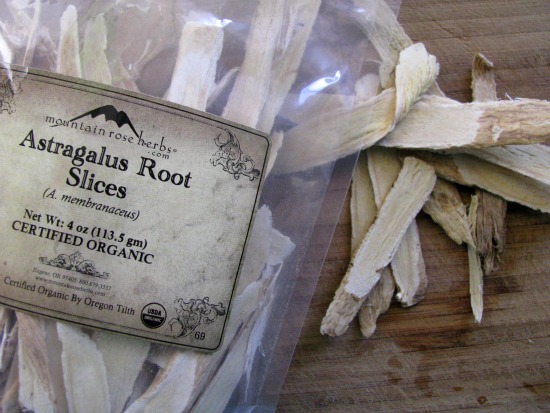 PS – Giving up our power is not hip hop!

1 three to four pound free range, organic chicken preferably from a local farm, but Trader Joes (or other market brand) will work too

Place all of the ingredients in a large stainless steel pot and let stand for about an hour.  Bring to a boil and remove all the scum that rises to the top.  Reduce heat, cover and let it simmer for about 2 hours, or until chicken is completely cooked.  Remove the chicken and take the meat off the bones.  It helps if you have a pot with a built in strainer.  Place the bones back into the broth and simmer for as long as 24 hours.  The longer you cook it, the richer the broth. When finished, allow the stock to cool, then place it in the fridge until the fat rises to the top and congeals.  Skim off the fat.

Your stock is now ready!  Ladle out individual portions and keep them in your freezer. 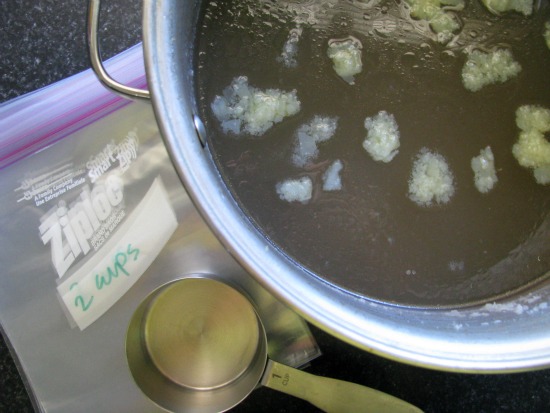 There are infinite variations of making cooking broth.  This is just the method I’ve come to use most often.  Experiment and create something that works for you.

You know what else makes a bomb medicine?  LAUGHTER.
http://youtu.be/ZsABTmT1_M0