A few years ago a friend of mine gifted me a year subscription to Cooking Light magazine. The first issue I got was dedicated to different kinds of chili and that’s where I got this recipe. Since then, this has become a staple in our kitchen in the winter months when butternut squash is abundant.

There are many reasons why we love this recipe, but the main one is that it comes together quickly. Though I prefer to cook my own beans from scratch, I often keep several different cans in the cupboard for days when I don’t have a lot of time. After making it so many times, it seriously only takes me about ten minutes to prep the stuff and the rest is cooking time. Even more importantly, the boys like it. The youngest one actually picks out the butternut squash with his fingers and eats that first. Just be cognizant of what your family likes though, as the recipe calls for one teaspoon of crushed red pepper, which can be too spicy for some little ones. You can always omit and sprinkle it on later. I usually just add a couple of shakes.

Also, it makes a pretty big batch, which makes it great for times when you’re having company or want some leftovers. 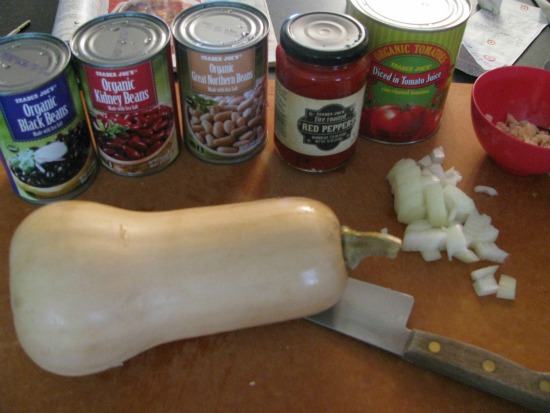 While the recipe calls for 2 fresh bell peppers that you roast on your own, I find it much simpler to use a whole jar of pre-roasted peppers from Trader Joe’s. I’ve made this recipe without the bell peppers when I was in a pinch and it was still good. Also, while the recipe calls for pinto, cannellini and red kidney beans, I just use whatever three varieties I have on hand (as you can see in the above photo). I’ve included garbanzo beans, black beans, northern… it really doesn’t matter. And while it calls for 1 1/2 cups butternut squash, I usually add the whole thing.