Do you know Pigeon John? If you listen to his music, at least casually, I can almost guarantee that you could tell me what/where he likes to eat.  And the survey says…Taco Bell.

With this in mind, I’m sure you can imagine that when we sat down to talk (in a hotel room at 3:30 a.m. with a woman wrapped in a lambskin blanket in one corner and a Living Legend in another) there weren’t too many surprises or deviations from what I was expecting.

In every conversation/interview I have with hip hop artists, there’s always a recurring theme. For Pigeon Johnny, I’d have to say that breakfast food consumption was the theme d’jour.  And the main course: oatmeal.  Again, if you listen to enough of his music, you’re probably not surprised by this.

And for those who don’t know yet, here’s an oldie but goodie to familiarize yourself.

As we discussed food, drink and ashes, Pigeon John munched on some of wifey’s Paleo Chocolate Chip Cookies. Talkin’ to dude, I really got a feeling that harkened back to being a kid and living to eat the food that excited me.  It took me to a time when I’d ask my parents “Why can’t I have that for dinner? How isn’t that a meal?”  It’s fun and innocent and carefree. And in many ways I envy him for that.  Here’s what I mean:

What are 5 essential grocery items?

I’ve kept the following question at the forefront of my interviews since day 1 –
True or False: You are what you eat?

I gotta say, the more and more that I get the opportunity to dialogue with artists, the more I see the connections that validate the above statement. Case and point – P.J. has been making life-loving, it’s-all-good, I’m-doing-this-because-it’s-fun music since day one.  Even when it’s not all good (Top Ramen days) he’s making light of the situation, heart on his sleeve and all, creating inspiring music.  He’s eating food that makes him feel good even when it ain’t the most most healthy (some of his favorites are Coca-Cola, Tommy’s chili cheese burgers, and well, Taco Bell).

What do you do to satisfy a sweet tooth?

For the record, I don’t even drink sodas but listening to homeboy talk about these kiddish treats that I would have loved as a young buck…it’s gotta be what gives his music that forever young quality.  It’s bomb.  I mean, it sounds good but somewhere along the way I lost the taste for something like that. He’s clung to it and it’s who he is.  It’s innocence and self assurance all at the same time.  He may be growing old, but he’s young at heart (and stomach).

What about food you eat with your hands?

The best foods – burritos, sandwiches, hot dogs…we used to make jokes when me and my sister were little eating oatmeal and Roots had just came out.  We’d be at the breakfast table – eating with my hands and shit – eatin’ oatmeal, you can do that for jokes…

Do you have any food recommendations that you could share?

How about a recipe? Do you have one that you could share?

Boil it up after a minute. Milk. Butter. Brown sugar. Raisins. Bananas. And then vanilla extract. Pour that in there. Stir it up and have a blessed time. (He also hooked up his famous eggs recipe…but I’ll get back to that one at a later time)

I am an oatmeal fan. Have been for as long as I can remember. So, you know we had to throw this one together (with a little Kitchen Mix twist). Oh and, as he was sharing the recipe I was thinking about his lyrics to “To Do List“:

Six hours later and I’m hungry as REAL
I wish she was home, she’d cook some oatMEAL
Put some butter in it, cinnamon and some milk
But she ain’t home man, so I eat from a can.

Ok, well, that’s mostly snack food (except the oatmeal).  What about sit down foods? How does that fit into his eat to live/live to eat mentality?

What makes a meal a feast?

Best ingredients for a sandwich?

Tuna fish, mayonnaise, dijon mustard, chopped up pickles, squeeze a little lime in there…and cigarette ash. Cuz you’re definitely cooking for yourself so you’re like shivering…you know, some things are falling in there.

Can somebody put a sandwich together for this guy so he doesn’t have to eat his cigarette ash? Sheesh.

Are awesome.  One, if someone’s cooking for you it’s a pleasure. Also, if you’re a single dude and you cook for yourself and you sit down alone and eat your meal, it’s a different type of psyche. I think it’s healthy.

What’s the best city for food?

I’m gonna hafta slide off of L.A. and I’m gonna give San Francisco it’s props. They got all the 24 – the noodles, they’re all unique and stuff, so I’ll give it up to San Fran. Portland’s great, too. Portland’s freakin’ dope. But San Fran since it’s all – a squeezed in town, you can go there, there, there. Everything’s just close.

Of course, I had to wrap up with our quintessential question:

True or false: You are what you eat.

Yes, you are. True. Unfortunately. It’s fortunate and unfortunate.  Everyone could eat a little healthier. Yeah, you are what you eat.

I guess what I really took away from my time with Pigeon Juan I can tie up like this:

On his album “Pigeon John Is Dating Your Sister” he has a track called “Identity Crisis” where he’s trying to figure out where to go as an artist; in appearance, speech and musical style.  This was my first time having a sit down conversation with him but I’ve seen him perform many times. Watching him evolve over the years, I really feel like he’s truly come into his own and developed a unique identity.  He’s comfortable with how he is. He’s comfortable with what he eats.  And his music is like comfort food.  It makes you feel good. You get the playful, pure innocence of a big kid who makes great music. It’s fun…and I hope you’re all in.

Thanks for the continued inspiration, Pigeon John!

Makes enough for a family of 4, or one really hungry mofo

3 1/2 – 4 cups organic, unsweetened almond milk – or any other milk of your choice

3 tablespoons brown sugar – or to taste

We like to soak our oatmeal overnight.  This reduces cooking time significantly, and since we’re usually rushing out the early morning door trying to get to school and work, it helps tremendously.

Place the oatmeal, raisins and milk in a pan and allow it to soak overnight in the refrigerator.

Warm the oatmeal over medium heat and add the butter and brown sugar.  Cook until thoroughly warm and you have reached the desired consistency.  Add in the vanilla extract and remove from heat.  Serve with banana slices. 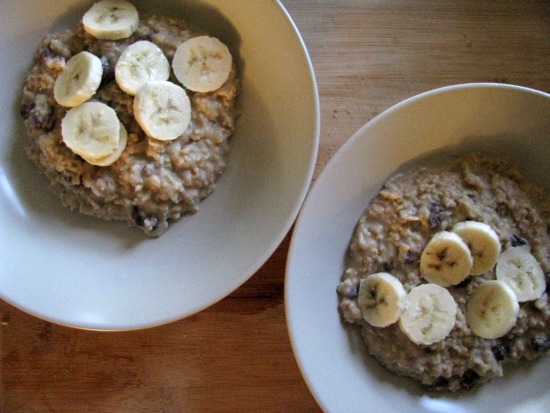 “All up in the mix like blenders” -Masta Ace If you’re my age and came up on Hip Hop,…