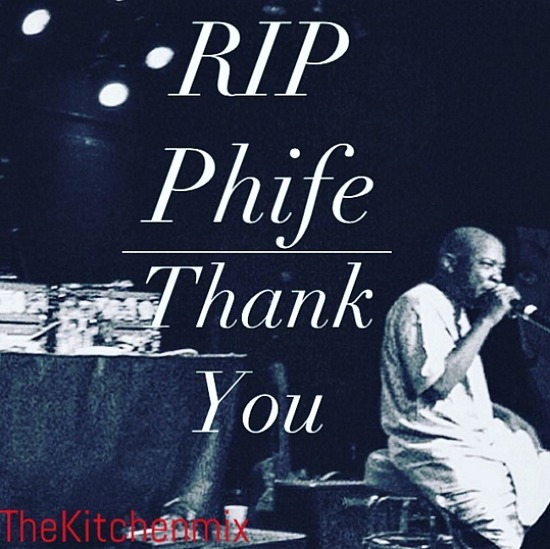 I usually take a lot of time to get my thoughts together when I post something. But today I just had to get this off my chest right away. It’s weighing heavy and I still have a long day to get through before I can sit and marinate on this situation – really let it sink it.

What’s crazy is that music touches each of us in such a personal way that we develop these relationships in our minds with the creators of what we listen to. The music is everything but the people behind the music become these larger than life figures and the more we listen to their music, the larger they become – the more they feel connected to us. When Guru passed I felt like I lost an uncle – specifically an uncle. I don’t know why. In my mind, because of his lyrics, how he delivered them and the moments in my life when his music meant the most to me, it just felt like someone close; an older role model. That one hurt a lot!

Today felt the same in many ways. But today it felt like a friend, someone that I can relate with. It’s interesting and weird how music can create that feeling.

I was reminded of being a kid all those years ago when Magic Johnson revealed he had AIDS. I was living overseas at the time and when he made his announcement I was sound asleep. I was a huge Magic fan. I worked extra hard in school one year so that I could attend one of his basketball camps over the summer. I watched and studied his game religiously. And so, when my mom woke me up that morning with the words, “I have sad news…” It really hurt because I understood the implications, the fact that that part of my life was over. No more games or highlights to watch. I was devastated. I know, he’s still here but losing him on the basketball court, for me, was a big big deal.

Anyway, this morning my wife woke me up with those same words. I have sad news. I felt like that basketball loving kid all over again. No. Not Phife. Phife Dawg. The Five Foot Assassin.

When musical groups start to gain popularity people tend to start singling out their favorites. McCartney is better than Lennon or Meth is better than Rae, that kind of thing. But I never really heard people talk like that about Tribe. They were just A Tribe Called Quest and they were dope. I mean, yeah, Tip has that voice but it was such a cohesive unit that it just felt like equal dopeness from each member. It wasn’t until Beats, Rhymes and Life that I really noticed Phife as an individual. On “Phony Rappers” he just went off. I remember sitting there in front of my speakers with a look like that big eyed emoji, repeating that track over and over. I must have memorized his entire part the day I got the album.

Talking ’bout I need a Phillie right before I get loose
Poor excuse, money please, I get loose off of orange juice
Preferably Minute Maid cuz that’s exactly what it takes
To write a rhyme, huh, to school your nickels and your dimes
Because an MC like me be on TV
Don’t mean I can’t hold my shit down in NYC

I never listened to him the same again after that. And after today, I’ll never hear him in the same way. When someone passes on you always remember the best moments you had with them. The way you reflect on them is different than the way you thought of them when they were around. So, after today, I’ll never listen to Phife or Tribe in the same way, ever again. And that’s not a bad thing. Because, in my mind I lost someone close and I’ll always have the memories that are connected to the times when his music played a significant role in my life.

Thank you Phife Dawg for your legacy and for being apart of my life. From myself, my family and the entire Hip Hop nation…THANK YOU!

Yo, remember this? “A lot of people on daytime radio scared of us Because they too ignorant to understand…