Did you ever get down to this…

If so, I highly recommend that you grab yourself a copy of Public Enemy’s Most of My Heroes Still Don’t Appear On No Stamp. This record was one of two summer albums that they released last year. All of the sentiment, style and revolutionary feel that their first 4 albums had, can be found here. Believe the hype! Maybe this chart can help you… 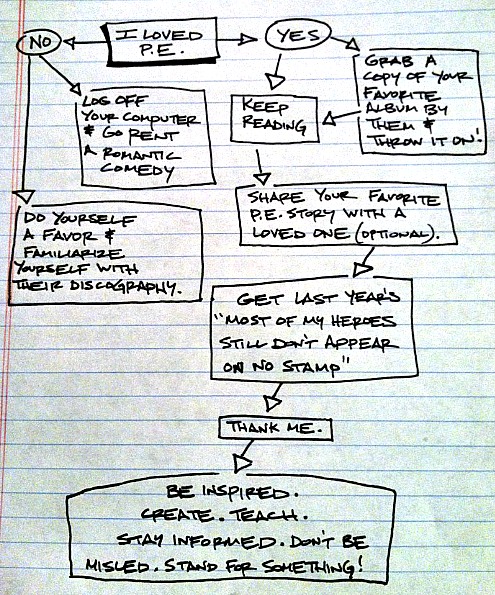 Alright, last year P.E. announced that they were going to be dropping a pair of albums to bookend the summer. More than two World Cups had been handed out since I was last checking for these HALL OF FAMERS. So, I wasn’t overly hyped by the announcement but it did pique my interest. And then they dropped the video for the first single. Bam!

Okay, okay, undivided attention, now. Yo, I can’t even put a finger on what it is about this song that makes me feel the same way I felt back when I first started to truly understand what it was that they were talking about back in the day. Maybe it’s the bridge:

I love it. Lines like, “the test is being at your best, the curse is living at your worst.” That’s it! You don’t need four agreements or ten commandments…that’s the truth right there. Simple. Plain. Hits the nail on the head. Do ya thing, Chuck. Work it, the senior circuit.

In the meantime, dusting off some of their classic material was in order. 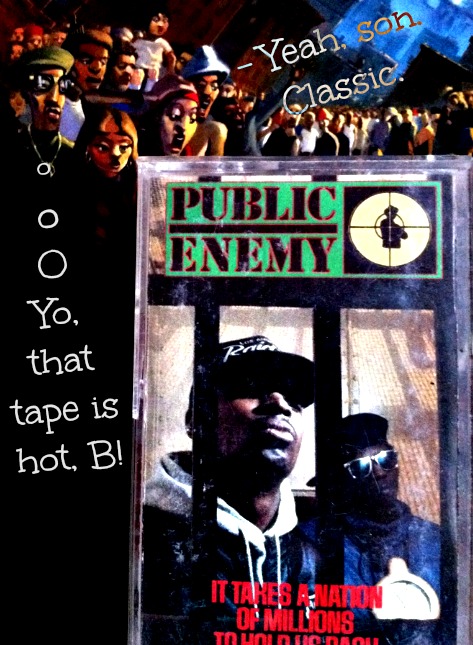 It might have been a few days before, or even on the actual release day, but another video from the album was let loose…and it featured DMC (who used to run with Run). Fingers were crossed in the hopes that it would keep the momentum of excitement going. And this is what I saw…

Hard. Throwback. Rick Ruben-esque. Yeah, I was ready for the full length. Day of the release found me at home doing the Daddy thing while my better half was out doing some shopping. She was going to be close to the record store so I asked her to grab the album for me, on vinyl. Errands run, she got home and informed me that this particular release would only be available on iTunes. What??? Wack. Look I have nothing against Apple. I’m crafting these thoughts on one of their products right now. If you call me up, I’ll be using one of their products then. My son is in the other room watching Super Hero Squad on another one of their products as I complete this sentence. So, it’s quite peculiar that I practically refuse to buy music on iTunes. Makes no sense, really. But, for that reason, it would be a few months before I was finally able to wrap my head around the full album on a digital purchase from another site.

When all was said and done, the album had finished it’s first complete cycle and was being processed in my brain. I was a satisfied customer. I had time to revisit the music that inspired me when their DJ’s name was still Terminator X (but ay, DJ Lord is no slouch). And now with this release I felt a sort of nostalgic completeness like finding that piece of the puzzle that you had been missing but finally found under the box. The album has a pervasive theme that’s same as it ever was, updated but not new. “Never have so many been screwed by so few.” It’s still Fight the Power but with slightly different verbiage. It’s P.E. for old school P.E. fans. I’m so glad it’s not P.E. aiming to make new fans and trying to acclimate to new styles. With that said, it doesn’t have an old school feel to it. It’s still fresh. I like it. Though, I still cringe at Flav’s verses the same way I did years ago. I always wondered how Flava Flav was even accepted as a member of this classic crew. Chuck D finally answered that for me during an interview with Tavis Smiley several years back. Check it out (might wanna bookmark it if you don’t have 25 minutes, but Chuck answers that question in the first three and a half minutes of the interview)…

So, yeah. The album delivered. My only grumble might be that in between almost every track they run through a list of unrepresented and overlooked heroes. While I do appreciate that they mention a wide array of individuals including Dolores Huerta, Sojourner Truth, Emmet Till, Leonard Peltier, Sacco & Vanzetti, Danny Glover and John Brown, it’s a bit distracting. Otherwise, I’m loving it front to back. Chuck D has that delivery that needs no backing. That energy pushes the album forward and as always he has something to say. To help him with the words on the record, he invited Brother Ali, Large Professor and Bumpy Knuckles to lend verses. None of these disappoint. If you ever owned one of Public Enemy’s longest-album-title-in-the-history-of-music records in your collection, I urge you to grab a copy of this release (apparently, they have since released physical copies). Seriously, they love long titles for their releases. Before this one (Most of My Heroes Still Don’t Appear on No Stamp) they released How You Sell Soul to a Soulless People Who Sold Their Soul (and don’t forget about It Takes a Nation of Millions to Hold Us Back). There’s gotta be a Guinness World Record there somewhere. 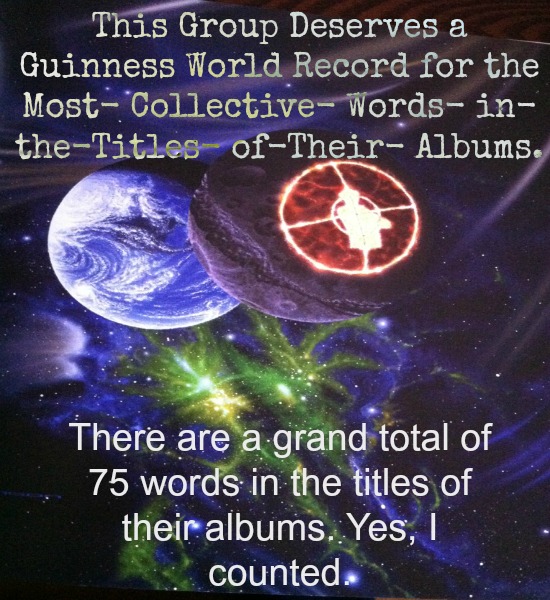 I did mention that Public Enemy released a pair of albums last year. As of now, I haven’t given the other album a full listen. But stay posted, you just may see a review of that one in the near future. Thanks for your continued support of the good folks in the Kitchen. Peace.