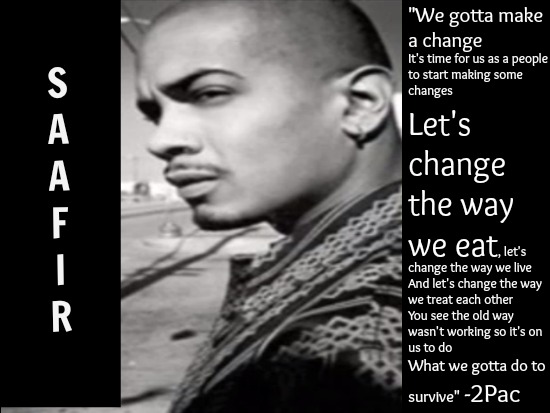 “A family in Oakland typically has a one in five chance of living below the federal poverty level, where grocery stores are non-existent, and access to fresh and nutritious food is limited all throughout the flatlands of East Oakland.” -Oakland Food Connection

I recently read an article about East Oakland rapper, Saafir. You remember him right? Harold from Menace II Society? Or how bout this…

Now that we’re passed the introductions, on to my point. I was saying that I had recently read an article about him, and specifically it was in regard to why he’s in a wheelchair. The explanatory article in question was prompted by a letter written by Shock G. You know him, right?

Or do you just know him by his alter ego?…

In the letter, Shock explains how Saafir was involved in a 1992 plane crash and that was the initial source of his back problems. Over the years he’s injured and aggravated the pain in his lower back several times over. If you want the details and the full rundown from Shock, himself, click HERE.

But here’s what stood out to me from the letter:

Saafir is a sugar junkie (skittles & soda), only eats junk food, and has been chaining Newports since the early 90s. He recently told me he hasn’t eaten a vegetable in over 10 years, and most of his meals come from either the Arco Mini-market, 7-Eleven, or the Wendy’s nearby his deep-east oakland apartment.

Reading this reminded me of the many groups out in Oakland that I’ve come across over the last 5-10 years who are trying to help out with the food situation. One of those groups is Oakland Food Connection. Apparently, the founder of this organization grew up watching people all around him in situations not much different than Saafir’s. From their website:

Jason Harvey, an African American born and raised in East Oakland, founded OFC in 2005 to address the tragic health disparities that had directly impacted him in Oakland, CA, witnessing numerous community members, including his family members, die from preventable diseases, such as diabetes, cancer and heart disease.

I can’t imagine not having access to a grocery store, much less fresh, locally grown fruits and vegetables. Much of what is going on with Saafir’s health is due to reckless behavior but the food aspect is shameful on the part of the City of Oakland. How, in this day and age, is it possible that whole communities don’t have access to fresh food?

Just yesterday I spoke to someone who (you’ll be hearing more about real soon) was able to cure herself from cancer through her diet. I have a friend who has cured himself from diabetes – again through diet. The communities of East Oakland need to have the opportunity to cure themselves from totally preventable diseases…and good food is a very critical part of the answer. It’s hard for me to swallow the idea of not eating a single vegetable in 10 years. That’s insane. And that’s not a knock on Saafir. Where’s the produce section at your local 7-Eleven or Arco? Fast food “salads” are often worse than the burger selections, in terms of fat, calories and salt content. It’s not an option. You can have salt and fat or salt and fat with a few green leaves underneath. Where’s the choice? Lack of access to nutritional education and healthy food choices is the cancer of our society. But there is a cure.

If it’s in your means, try to help. Get involved. Spread the word. Look for ways that you can help by clicking HERE. This situation is not OK. I’m sorry to hear about Saafir, he’s an amazing talent. But I’m more sorry to know what the community he’s living in is faced with every day. Pac (who by the way, was Saafir’s roommate back in their Digital Underground day) said, “We gotta make a change, we gotta change the way we eat.” He knew what was going on. However, many people in that community aren’t aware of other options and food choices.

Food knowledge is power! Help spread the word, one person at a time.