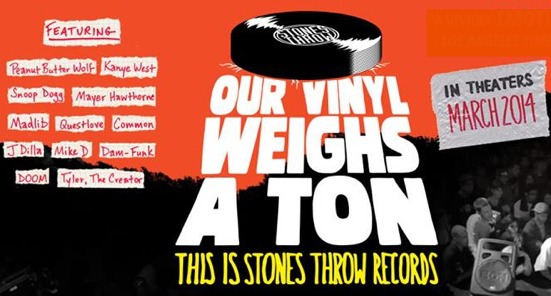 Right around the time Jay Electronica announced that his first album was complete and ready to be shared with the world, I caught word of another project that I was really looking forward to (one that might actually see the light of day – as of yet, still no Jay Elec album). About a year and a half ago I shared with you a project that, at that time, was merely a piece of a long term goal on Kickstarter.

The project has since come out and is now in select theaters. I caught it when it made its way through our area code and thought I’d convey my sentiments on the film with you. Actually, it’s more of a what-you-can-expect and what-I-got-out-of-it than a review (where I’d rate it). 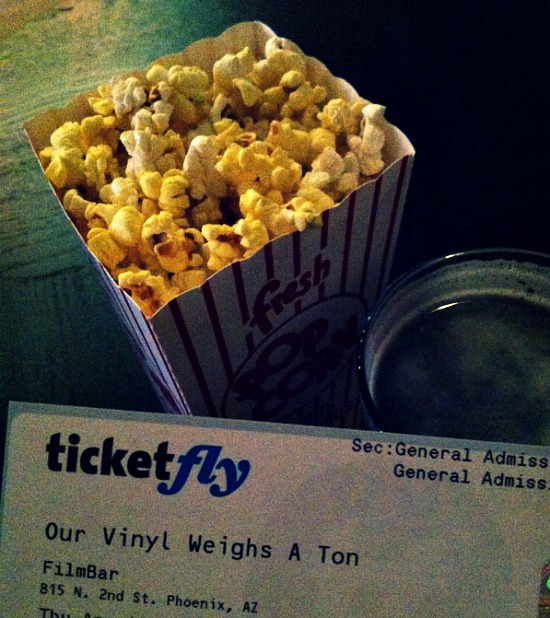 I’ve been a huge fan and supporter of projects that the Stones Throw label has put out since I first heard My Vinyl Weighs a Ton. I’m happy to announce that the documentary really came out nicely. The narrative behind the report on Stones Throw Records was pieced together in chapters with a prologue that you can catch down below. It was fitting to have some outside perspectives from well-respected artists in the industry like Common, Questlove, Mike D, Kanye West and Houseshoes. It added another dimension to what the artists on the label had to offer.

If you end up watching this movie and it’s not in a theater, make sure you’ve got good surround sound – not just TV speakers. The beats alone are worth the price of admission. All heads were bobbing the night I caught the feature. Madlib handles the original music for the film but you can bet there’s a little of everything from the label’s catalogue featured throughout.

The first part of the movie chronicles the journey of Peanut Butter Wolf and Charizma as they try to get their feet in the industry door. If you aren’t familiar with the story, it’s tragic but that’s all I’ll say. It was cool to catch a young Sunspot Jonz interviewing a young PB Wolf. Great archival footage. As I was watching I kept thinking, when I get home I’m gonna throw on Big Shots. Haven’t heard it in awhile.

As the film progresses you get the backstories from all of the other artists on the label and lots of focus on a few of the most important projects that they’ve put out (Jaylib, Madvilliany, Donuts, etc.) I found myself thinking, I better throw some Madlib or Lootpack on first as soon as I get home. And, Ooh, haven’t heard that DOOM joint in a minute. I got it on vinyl. Better put that on ASAP. Basically, everything that came on, I found myself making a list of what order I was gonna play it in when I got home. So much good music that they’ve put out over the years.

The insight on first meetings between many of the artists is interesting. It was fun listening to Houseshoes talk about Dilla and Madlib meeting for the first time. Also, Madlib and DOOM’s first meeting. Both of those became classic projects respected worldwide. And the fact that you’re getting first-hand accounts is major.

What I liked best was the fact that it wasn’t just highlighting the good. There’s just as much bitter in this world as there is sweet so better to show all facets. There were emotional moments and those balanced perfectly with the laugh-out-loud moments. It takes you through a nice array of human emotions.

I will say that I was a bit disappointed to hear more from some artists (Anika) and very little from others (The Stepkids). Oh, I was also curious about the ominous statement following the story of Aloe Blacc. You get the back story on his success with the label and that segment ends with “Aloe Blacc refused to be interviewed for this film.” Did he leave the label on bad terms? There was no transition from that and it continued on to the next topic. Anyhow, other than that, it was a really well-executed documentary that you should definitely check out. It’s one that I’ll end up buying on DVD and you would do well to do the same.

We’ve been fortunate enough to have talked with several artists on the roster including Homeboy Sandman, The Stepkids and Peanut Butter Wolf himself. I hope the label continues to be successful in the future so we can keep getting more material from these artists as well as being introduced to new ones. Here’s to more greatness from Stones Throw Records in the coming years.

Here’s the extended trailer, that’s also the first 5 minutes of the film.

I caught this movie at Filmbar in downtown Phoenix. It is a truly independent theater and bar. I recommend checking this place out next time you’re looking to go out to a movie.

“Many popular drinks consumed in Western culture are depleted of vitality. Coffee, alcohol, sodas, some processed juices, and even…