I have a closet full, seriously, full of CD’s that I haven’t heard in a ridiculously long time. The other day I was cleaning house, which generally means good musical sound vibrations are bouncing off the walls…thick. Great music + cleaning. I don’t know what it is about it.
Anyhow, I get this grand idea that I’m going to grab a stack of haven’t-heard-in-a-minute CD’s and play these while I get my Mr. Clean on. I snapped this instagram photo of the random stack I snatched up for my dust busting. 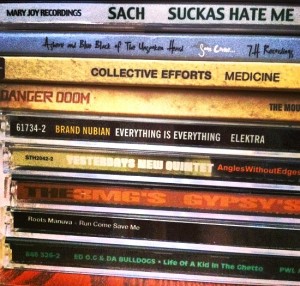 These are albums I hadn’t heard in quite a bit, years in many cases (They are, from top to bottom: 1. Sach – Suckas Hate Me 2. Asheru and Blue Black – Soon Come… 3. Collective Efforts – Medicine 4. Danger Doom – The Mouse and the Mask 5. Brand Nubian – Everything is Everything 6. Yesterdays New Quintet – AnglesWithoutEdges 7. The 3MG’s – Gypsy’s Luck 8. Roots Manuva – Run Come Save Me 9. Ed O. G & Da Bulldogs – Life of a Kid in the Ghetto). Needless to say, it was refreshing and brought on a flood of memories. Two extremely positive things came out of this experience.
1. I pulled out Ed O. G & Da Bulldogs’ Life of a Kid in the Ghetto. Listened to it. Loved it. Was in 1991 mode all over again. And then…later that evening I was record hunting with my brother and, by chance, came across a copy of the Rarities and Demos version of that same album…for four bucks! That album is slammin’. It’s been on heavy rotate since.
And
2. This one is central to today’s theme…I was reminded about and reintroduced to one of the West Coast’s finest MC’s and producers that you probably never heard of. Ladies and gentlemen, thank me later because I’m about to lace you with some hidden treasure…
I wouldn’t be terribly surprised if you told me you had never heard of Sach. If you’re not a fan of L.A. Hip Hop, up on 90’s Hip Hop or hip to Project Blowed/Goodlife Cafe MC’s, then you probably never heard of The Nonce either. Sach is 1/2 of this amazing group, a duo who’s discography took a hard right when one of its members (Yusef Afloat) passed away. Get acquainted the same way most of us were with their breakthrough jawn about mixtapes (Sach is the first MC going in on the track).

And just to get you up to speed with The Nonce, peep the mini-doc…

I had to pull out all the Sach and Nonce stuff. 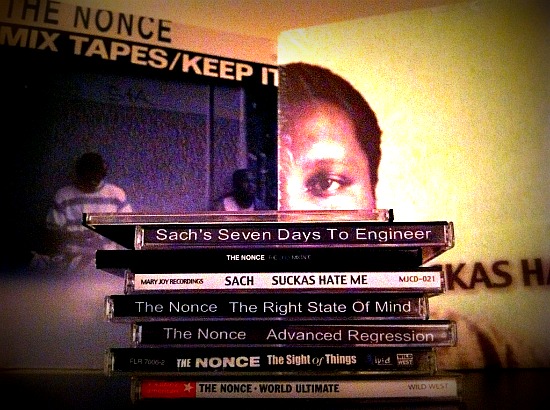 You know when you go to wine tastings, how they give you just a sip to get you interested? How they pull you in with that one tantilizing sip and then if you like it, you end up having to make a purchase? Well, that’s what I’m going to do for you now. Check these out:

From Seven Days to Engineer

From Suckas Hate Me

From the Tags of the Times 3 compilation…

Good, good stuff. He’s also got a hard-to-find project called Name Science. Some dope CDR quality beats and raps. If you really wanna start digging for Sach (AKA Nouka Basstype) material, look out for Advanced Regression and The Right State of Mind. These are two Nonce albums that Sach released after Yusef Afloat passed away. So good. A limited edition, super rare vinyl release that combines tracks off those two albums was put out on a German label back in ’06. Somehow, my younger brother got his hands on a copy of that…so you know I had to trade up on that (gave him a Bunny Wailer album as well as a Jacob Miller piece in exchange…). This is some of my all-time favorite stuff. I love that laid back L.A. true-school style. If you can get your hands on any project he’s been a part of, you’d be doing yourself a favor. It’s great stuff. The two official Nonce releases are probably much easier to score so you might wanna start there (World Ultimate and The Sight of Things).

I think I may have started something that I’m going to make a habit of – grabbing a stack of CD’s I haven’t listened to in a long time and throwing them on as I clean up the digs. Give it a try, you might just reintroduce yourself to something that you’re gonna love revisiting. Meanwhile, I’m on my second stack and these floors look like they can use a good mopping. Good music and cleanliness…it’s next to godliness.

Wow! I’ve been handed so many free CD’s and mixtapes over the years. Everybody’s a rapper and everybody has…