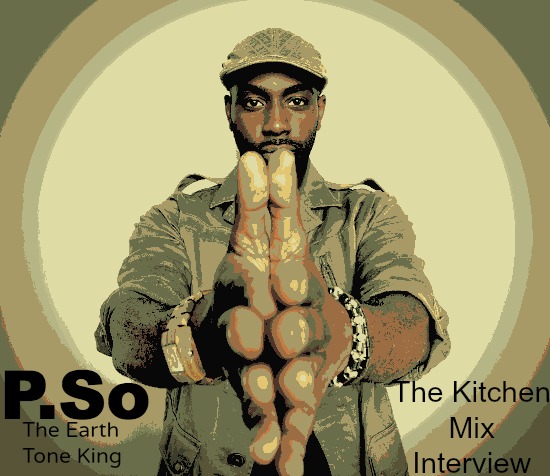 “you crave music, you crave sound – it fulfills you”

There’s a fine line between being enthusiastic about something you like and overhyping it. When it comes to family and close friends, I try to be as nonchalant as possible when recommending things. Did you see that new Wes Anderson movie? It was alright, check it out if you get a chance. I brought it up, recommended they check it out and that’s all I really need to say to them. But for you, I think I can be a little more honest and up front. You know, I’m just casually mentioning it and not over hyping it when I say, “Gateway to Greatness is dope. You really need to check this dude, P.SO out.” I’m just bringing it up and recommending it. No big deal. But that’s because you and me, we got it like that.

Truth be told, I was a little late on getting put on to this NY native. Which is kinda ridiculous considering that I’ve been up on the rest of the AOK Collective for some time now. In any case, I’m glad I eventually made my way through his catalogue, and now it’s your turn. If you aren’t already a fan of The Earth Tone King, today your journey begins.

After already talking food and music with 2 Hungry Bros, 8thW1, Homeboy Sandman and Fresh Daily, it was definitely time to fill in the missing piece of that AOK puzzle. We caught up with P.SO and mixed it up with a little talk about food and music. Here’s some of that conversation:

TKM: How does food relate to the creation of music?

P.SO: I think food is the most natural metaphor for music. We think of it as nourishment – a few years back, my friend, Homeboy Sandman had an album called Nourishment. MF DOOM had an album called Mm..Food. A lot of artists have likened music to food because from an audio perception, you crave music, you crave sound – it fulfills you. It gives you energy just like nutrients give you energy. Cooking food, making food and eating food does remind me of the music process. That’s the biggest connection.

TKM: And where are you at with food right now?

P.SO: I went through a really stiff journey with food. I used to not really care what I ate. I grew up living across the street from a McDonald’s. I used to eat whatever I wanted and got really heavy, unhealthy and out of shape. I think the heaviest I got was 254 lbs. Ironically, it was Hip Hop that got me to start losing weight and eating healthy. I noticed that I just couldn’t perform well in the studio or in the booth – you know, my breath control. My eating habits started affecting my energy level. I realized that I had to make an adjustment. I started working out, going to the gym more and slowly started changing my diet. And I started to change. I lost a total of about 60-70 pounds. I started working out more and that just changed everything. I had more energy and more focus. I felt better as a human being and therefore was able to create better music, perform better and be a better artist. The diet changed considerably. I was having stomach issues like acid reflux and stuff like that. So I stopped eating dairy for awhile, cut back on sugar a lot, let go of the red meat, started eating a lot more brown carbs – honestly, I really simplified my diet. It got to what I call an athlete’s diet or a cro-magnon diet, finding the same simple 10 foods that I find give me the most energy. Quick proteins like turkey or chicken, lots of greens, lots of whole grains, fresh fruits, peanuts, stuff like that. Stuff that gives me the type of energy I want. I let go of the processed foods, fast foods, and the sugary drinks.

TKM: Talk about getting started with music.

P.SO: Music was always a hobby but I kinda had a late start with it. I didn’t really start pursuing my music goals until I was like 25. I always had the itch, the talent, the love for it but I never had the courage. I never saw myself as an artist. Then one day I was like, you know what, I need to stop looking at it like that and just go ahead and try my best to do it. Moved to New York (City), got really focused and met a lot of great people and the rest is history. It was that courage thing. It takes a lot of courage to be an artist.

TKM: Yeah, I feel that making the switch to a healthier lifestyle is akin to the courage you’re talking about in the switch-to-artist-mode. Very similar.

P.SO: Oh yes, definitely. It’s weird because listening to Hip Hop made me think about healthier lifestyle choices. On the Dead Prez album, Let’s Get Free, they had a song called Be Healthy and they were talking about “lentil soup is mental fruit” and it was the first time I had heard rappers talking about healthy food. It seemed weird at the time, you know, it’s different. And I remember in college running audio for the AV Club, I got the writer for a show the Roots were performing and it was all vegetarian, super healthy food. And at that time I was eating very unhealthy so to see them eating that way seemed so weird to me. I had no idea why they were eating like that. Fast forwarding now to 2014, we stress getting healthy food so much. When you’re on tour you’re forced to eat really bad food. You’re exposed to bad stuff and now I see why they wanted all the healthy food on the road. You need the grains and greens because you’re going to shows night after night after night and you’re not gonna have any energy, you’re gonna run your body into the ground. It’s so weird now that I’m on the other side of that artist curtain, I totally understand why having a healthy diet is so important to maintaining your functionality as an artist.

“Ironically, it was Hip Hop that got me to start losing weight and eating healthy.”

TKM: Right. And since you touched on some Hip Hop/food lyrics, let’s get into that a bit more. What are your thoughts on this line:

P.SO: I think he got it right. I don’t eat pork, personally. I consider it a red meat and I don’t eat red meat. And eggs, you know, eggs aren’t bad but normally when I make eggs, if I’m cooking two, I might leave one yolk out of it. Eggs aren’t bad as long as you’re not eating a ton of yolks. But if I was gonna switch that up, from ham and eggs, I’d do turkey and egg whites. That’s a simple alternative.

TKM: So, do you get down in the kitchen pretty good?

P.SO: Not really. I’m not nearly as talented as the Hungry Bros. I do cook though. But I kinda cook bachelor style. I might make some chili, some chicken, a little brown rice and some salad, a little salmon. My meals are definitely not winning any top chef awards but they get the job done.

TKM: Do you have any recipes to share with us?

TKM: What kind of projects are you working on that we can look forward to?

P.SO: I’m working on a few things. I dropped my last album called Gateway to Greatness – an album and graphic novel combination. I’m re-releasing that album in a few months. The re-release is going to have a bunch of remixes and some new videos. Also, working on an album with 2 Hungry Bros. We don’t have a name for it yet but it’s like 60-70% done. I’m also working on project with another producer group I’m working with called the Soundmen. It’s a little bit more electronic. That project hopefully will be coming out at the end of the year. I’m also working on some films.

TKM: As an artist in 2014, with everything being digital, how has the experience of putting out music been for you?

P.SO: It’s a weird time. Vinyl is still really strong, sales went up something like 12% or something crazy last year in vinyl sales. Especially overseas, it’s still a coveted way of releasing physcial music. CD’s are obviously dying. Personally, I only have one device in my apartment that can play CD’s and it’s my old laptop. I have no CD drive at all besides that. Even me, when I press physical CD’s, only do low pressing numbers. It’s just for show because some people still want that tactile thing and it’s only for them. The digital world is even weird now. People aren’t even downloading anymore. People are streaming. So, even that’s changing. Everythingg has to be on Soundcloud or Spotify or people won’t listen. It is difficult but at the same time as long as people are still listening to music then that’s really the bottom line for me. The problem is everyone has a different way of receiving music. Some people still do physical, some only do iTunes, some just radio, Soundcloud, whatever. You have to make sure you have all bases covered – be on top of the music industry. If you’re not out there at shows, online, digesting other people’s music, how can you understand how fans are going to find your music. You have to understand how the landscape works. You have to find out all the different ways of putting your music out.

P.SO: Hip Hop is a very entertaining genre of music, it’s very adaptable, from the sampling aspect of it to the subject matter. You have so many different types of rappers and because Hip Hop is such a great form of free expression – you listen to other genres and it seems like they’re only limited to two things, like Pop and Country music are only about love, loving, missing someone or having fun and partying. With Hip Hop, artists have the freedom to make different types of music about everything. Because of that freedom, Hip Hop’s always changing. There’s always artists coming out with different styles and perspectives and that keeps it relevant. It can reinvent itself. Hip Hop in 2014 is not what it was in 1996. And that’s why it’s still around. It will continue to change. And that change is part of the problem – people don’t always like change. That’s the double edge sword. But that’s what makes Hip Hop relevant.
____

Yo. I cannot say enough good words about this man. He puts out great music, peep the Bandcamp or Soundcloud, he’s multidimensional, peep the graphic novel, and as you can see he’s conscious in the kitchen. Our kinda guy. Keep up with your new favorite rapper on Twitter or Facebook. While you wait for his new material to see the light of day, be sure to go back a grab all the other projects that were dropping while you were sleeping. P.SO the Earth Tone King…that’s what makes Hip Hop relevant in 2014.

I’m working on a post about goals right now.  I’ve never set goals in my life; it’s a very…