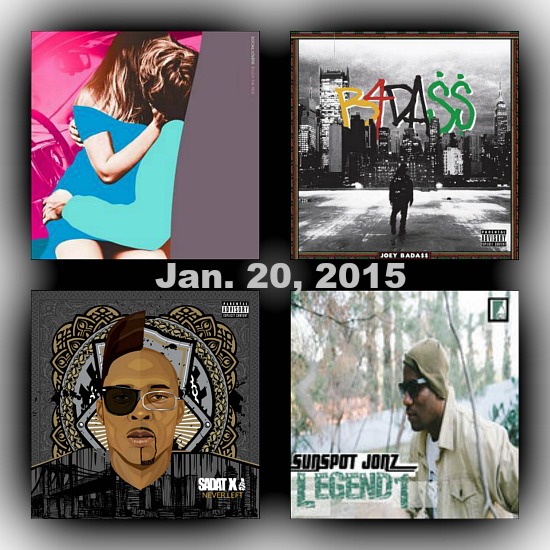 It’s interesting how some of my favorite albums of all time were, in many cases, released on the same day. It was brought to my attention that both Midnight Marauders and Enter the 36 Chambers were both released on Nov. 9th of the same year. While both of those albums were a big part of my teenage years (and ever after), that’s not something that stands out in my memory. For whatever reason, I must not have purchased them on their exact release date – although, I was living in Germany at the time and release dates in Europe didn’t often coincide with what was going on stateside. I could have had them before people in the U.S. for all I know (which was the case with Doggystyle).
I do, however, recall purchasing both The Score and All Eyez on Me on the same day and anticipating both being released. And I was very pleased with what those two albums turned out to be.

Here are some other interesting coincidental releases:

Souls of Mischief’s 93 ’til Infinity and KRS-One’s Return of the Boom Bap both came out on the same day in ’93. And just one day prior, Digable Planets’ Reachin’ (A New Refutation of Time and Space) and Lords of the Underground’s Here Come the Lords were released.
EPMD’s Unfinished Business and Beastie Boys’ Paul’s Boutique on the same day in ’89.
OutKast’s Aquemini and A Tribe Called Quest’s The Love Movement were both released on September 29, 1998.

I’m sure I could go on and on with this and I haven’t even got into other genres. In fact, you’ll have to spend some time on Google to verify, but I think Nirvana, Pearl Jam, Bjork and Tribe Called Quest all had albums that dropped on the exact same day.

I bring this up because last week, while I was juicing a nice little ginger, apple, tumeric, super greens and cucumber goodness, I looked down at my phone and noticed the date…

And on top of everything I had too much everyday life shit piled onto my plate for the week. Which meant, I wasn’t able to cop everything on Tuesday. In fact, I just right now purchased that new Cherries Records release on vinyl and that’s from the label of one of my very good amigos. Well, I’ve finally got around to everything that came out last Tuesday and I don’t want you to miss out on any of it so here are some of last week’s best releases…cuz “damn it feels good to see people up on it.”

1. Social Lovers. Enjoy the Ride.
The thing is, it can’t be all Hip Hop all the time. I make a point to do what I can and sprinkle in some Jazz, of course some fresh Roots Reggae and why not a little Modern Funk and R&B into our musical selections? Here’s a project that showcases the latter.

See, the good folks at Cherries Records, who also happen to be one of the greatest couples in music and in the list of people that I call friends, have been giving the world Modern Funk in the form of 7″ releases for the past few years. Last week they finally released their first official LP. Phoenix, Arizona’s very own Social Lovers have put together a solid modern ‘street funk w/ a splash of class’ album. Here’s the first visuals and single from that project…

Head on over to cherriesrecords.com to grab this album in either the MP3 format or, for vinyl lovers, the full 12 inches.

2. Sunspot Jonz. Legend1.
Around here, anything from any of Living Legends crew members always ends up on our radar and eventually onto our listening devices. So, when I saw that founding member, Sunspot Jonz, was releasing a DOUBLE album, I set my internal calendar to bookmark the occasion. This man’s catalogue is impressive. I don’t think that there are too many artists out there that work as hard as this dude does. Accesshiphop.com has 19 albums that you can purchase by Legend numero uno and there are countless other projects he’s been a part of.

This latest project is more of what you’ve come to expect from Sunspot Jonz. It’s still that Underground and Hella Broke sound but upgraded just enough so that you can tell it came out in 2015 and not 1999. Features on the project include Talib Kweli, Slug from Atmosphere, Luckyiam, Grouch & Eligh, Equipto, and Pigeon John.

“Pong Dedication” featuring Eligh might just be my favorite track but it’s two albums in one so it’s kinda hard to pick a true favorite.

Be sure to cop that HERE.

3. Joey Bada$$. B4.DA.$$.
What more can I say about this kid that hasn’t already been said? I’ll just start by saying that there are certain songs on this project that at first listen have me feeling like I’m hearing something straight outta 1993. In a good way – the mind tricks the body, the body thinks the mind is crazy.
See if you feel the same…

This young man gives me hope for the future of Hip Hop. A talented young artist that knows his history, a true student of the game. I’m surrounded by teenagers everyday and this is the type of Hip Hop I wish all of them were gravitating to. Shoot, this is who I want my own kids to be listening to in a few years. This album was what I was hoping it would be. Thank you for this one, Joey!

This might, could be my favorite cut from his stellar freshman LP…

Head on over HERE if you still haven’t copped this album of the year (so far).

Mark Jan. 20, 2015 as the day that old school and new school combined to give the masses a true slice of what Hip Hop has to offer. Joey representing the new and Sadat X, of the great Brand Nubian, representing the golden era. This is another artist that I make sure to help support by purchasing everything he’s ever put out. First off, that cover art alone is worth a purchase. True school fans will enjoy this not just for the dopeness Dotty X is known for bringing but also for the features (Cormega, Chi Ali, Skyzoo, and Craig G) and bits of Hip Hop history sprinkled throughout (interludes where he shares tales that involve many of the culture’s heroes).
Here’s the first single off the project…

You can stream the album down below and then head over HERE to cop your physical copy.

It’s officially summer time, dear friends. Since 3/4 of our family is tied to school schedules, this is a…