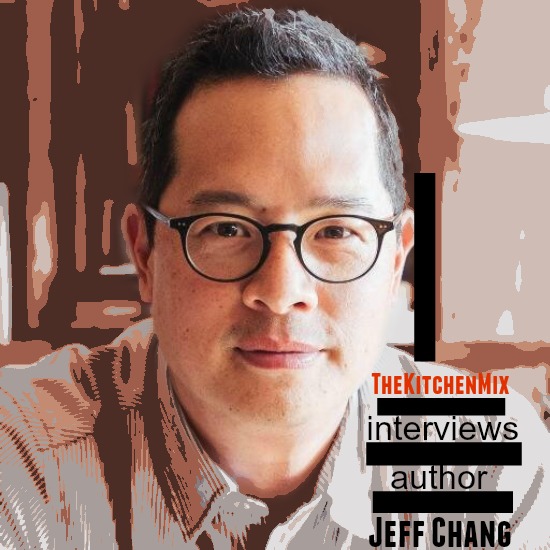 I don’t want a revolution that doesn’t leave us eating, dancing, and laughing.

“Why do you like Hip Hop and books so much?” Five year olds come up with the deepest philosophical, thought provoking questions – the type that make you take note of the absurdly obvious that you just never noticed. And my five year old, he’s the king of the these queries. My response probably involved a Lego analogy but he wasn’t asking as much as he was trying to make me come to grips with my self-imposed shackles. You know, I do appreciate that he recognizes my hobbies. And this was essentially his attempt at a rhetorical question but it did get me thinking. I mean, this is a book and Hip Hop household. But when you hear it, it’s like, yeah man, how many times have you hauled these kids to a bookstore, library or record store in the last six months? They’re kids. Take’em to a toy store or something. But honestly, what we’re into, they’re into.

And this is precisely the question I might have asked today’s featured guest. Admittedly, this dude probably deserves the question even more so than I do. Jeff Chang has probably received more acclaim for his books on Hip Hop than I have books on Hip Hop (and I have a pretty nice collection). You know this is the man that wrote Can’t Stop, Won’t Stop, right? Yeah, the one that was heralded as “the best book ever about Hip Hop.” And I won’t even get into the fact that he’s produced records and co-founded a label that helped introduce us to the likes of DJ Shadow and Blackalicious. So, in retrospect, I’m kinda regretting not asking him that question to open up our interview.

I missed the opportunity to ask him that question, but follow along for the rest of our little Q and A. As always, it’s a little bit food and a little bit music. Food, books and music…what else is there. This is Jeff Chang…

Talk about where you are with food in terms of what you gravitate toward or avoid or any special diets and such.

I grew up in Hawai’i so I guess I came up with a fairly broad kind of palate, spanning oceans. It’s only now, later in life, that I have come to understand what a blessing that was.

It’s interesting that usually one of the first things that come up when talking about cultures is food. Hip Hop has been so thoroughly dissected and yet no one really talks about the food of the culture. Can you give your thoughts on food as it pertains to Hip Hop as a culture?

That’s a really interesting insight. I didn’t think much about hip-hop and food until more recently, when we saw the rise of hip-hop-styled chefs like Roy Choi or Eddie Huang. Both of them took the kind of basic cooking they grew up with and consciously remixed it with local influences. They consciously made street food–stuff that didn’t require getting all dressed up for and that could be eaten casually and informally. I like that they aren’t fussy about their food. It’s about simple, good elements that come together seamlessly. All of this is really hip-hop to me.

Yeah man, the essence of Hip Hop. That’s not to say that artists don’t address food. There have been quite a few songs over the years that focus on food. What songs or lyrics come to mind? Is there one that stands out more than any others?

The one that always stops me in my tracks is Rakim’s classic one about the things he misses when he’s broke: “A pen and a paper, a stereo, a tape of / Me and Eric B and a nice big plate of fish / Which is my favorite dish / But without no money it’s still a wish.” 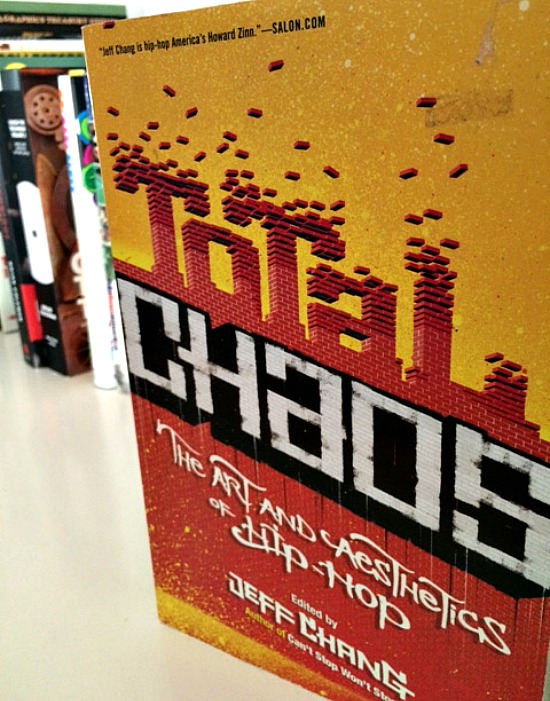 Biggie was talking about “t-bone steak, cheese, eggs and Welch’s grape” How does a meal lineup like that sound to you? What would you do to add to, change, modify or rearrange from that dinner menu?

Haha! That’s not me at all. I’d be into some kalbi, limu poke, fresh poi, and basic Hawaiian tap water!

I have been lucky enough to travel quite a bit. The only thing that ever surprises me—and saddens me—is when people are ungenerous with food. I’ve only ever noticed this in the U.S., the kind of thing where you go to a fancy reception or a wealthy person’s house and there’s nothing to eat but crackers and nothing to drink but cheap soft drinks. I guess I grew up with food being a central thing—where no matter how broke you were, if you were inviting people over you were going to make sure they left with a full stomach and a plate of food to go. So please don’t invite me to your “party” if there’s nothing to eat. I wouldn’t want to lower my estimation of you.

It’s about sharing and reciprocity.

You’ve had the opportunity to address the need for revolution in several different contexts. How does food and what we consume fall into all of that.

Well, someone very wise once said, “A hungry mob is an angry mob.” On the other hand, I don’t want a revolution that doesn’t leave us eating, dancing, and laughing.

I’m not gonna go with anyone famous in either of these. One of the things I really enjoy is making brunch for my fam, and sometimes close friends, on Sunday mornings. It’s all pretty simple, really. Usually there will be some slightly garlicky hash browns, perhaps a curry tofu scramble, and whatever piece of nice meat we might have—Hawaiian-style Portuguese sausage or something local from Aidell’s. I’m still perfecting every dish I make, but the main thing I haven’t figured out is how to get everyone to eat slower! The one meal I miss the most is my Grandma’s huge pot of her weekend ling au tang soup. She really was the best cook ever. 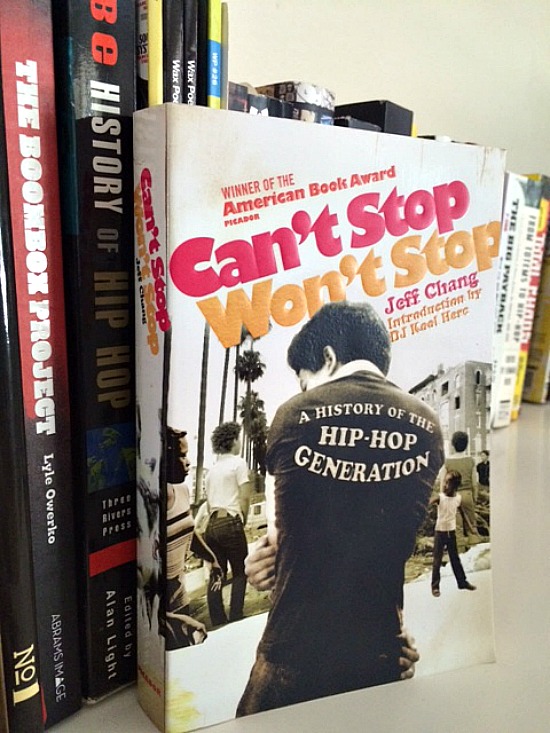 Complete this sentence: Music is best when…

shared with folks you love or may come to love.

What’s the relationship between food and writing?

Um. Writers gotta eat! I was born in the morning so I think that’s why I love my brunches. I’m also a morning writer, and I find I’m best when I have a great breakfast before settling into the zone. If it’s a good day I’ll put on some music and continue on, taking little snack breaks to let things settle every once in a while. When I’m done I’ll celebrate with a nice early dinner and a book or a movie or Netflix with the fam. That’s the definition of good living right there, I think.

What Hip Hop artists (or people involved in the culture) would you like to see battle it out on a show like Iron Chef?

What about Roy Choi vs Raekwon the Chef? Different styles, different coasts, different swag. I think that would be an amazing show. 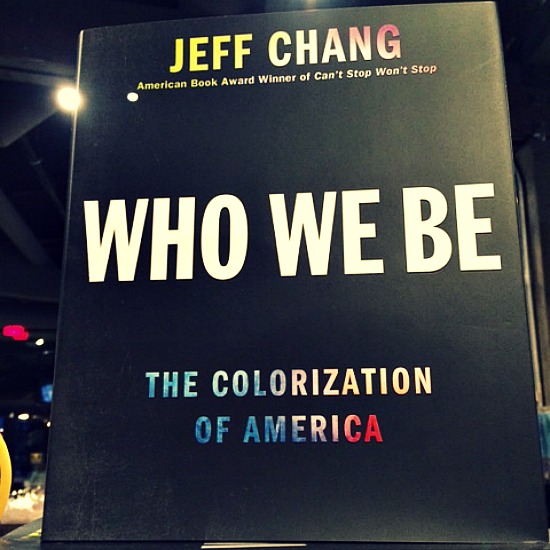 What food or drink do you recommend that would go best with your latest book, Who We Be?

Well, Who We Be is about having the kind of discussion around race that hasn’t been had — so we would want a meal in which people had to pass the bowls and plates around, maybe even one in which people served each other. It’s about sharing and reciprocity. We would want a meal that would leave people satisfied, not too full and overburdened. And obviously it would need to be polycultural—maybe the food reflects how old ideas are adapted when people really start exchanging ideas with each other. And it would have to be democratic — small d — so I wouldn’t presume to determine the meal. Let it generate from the guests on up!

Jeff is undoubtedly one of the great voices in literature for the Hip Hop generation. If you still haven’t cracked open Can’t Stop, Won’t Stop, there’s no better time than now. I’d also like to direct you to Total Chaos, an anthology that he edited. And last but not least, Who We Be, the latest and possibly the most important thing he’s put to paper. Give him a follow on Twitter to keep up with any articles he drops or to be prepared in case he’ll be in a bookstore near you. Books and Hip Hop. My kinda dude. Now excuse me as I try my hand at some Hawaiian cuisine.

I had a lot of fun making this recipe!  Read more about it at the Phoenix New Times.