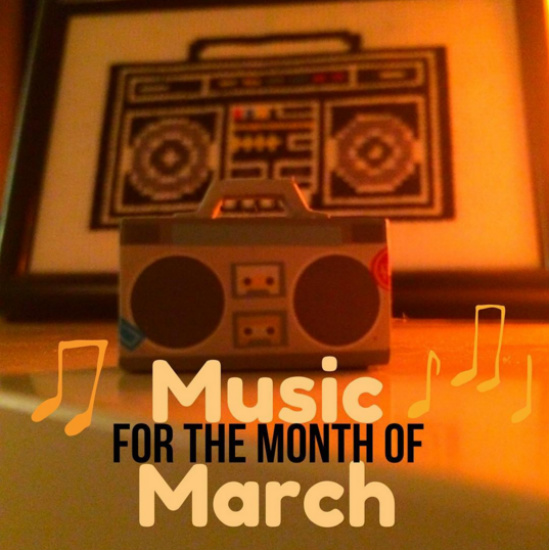 I can hold off on mentioning college hoops when I bring up March Madness this year. We had it all – ridiculousness in the presidential race (worse than usual), record-level flooding in Louisiana, a rare total eclipse, terrorist bombings, the Golden State Curry’s, Batman vs. Superman and that Organized Noise documentary. Some good news, some not so great. But I’ll tell you what was pretty solid this month – musical releases. Some of the best of the year so far, in fact. These are some of the projects that caught my ear in March…

Let me tell you who’s been super consistent and has yet to let me down – Coalmine Records. Solid, solid. Please file them under labels that only put out that heat. I haven’t heard Planet Asia sounding this good since…well, he’s actually a very reliable artist and he always comes off nice…but over DJ Concept’s production? Yeah, this is my favorite side of P.A. It reminds of how I felt about him when he kicked in the door on Peanut Butter Wolf’s “My Vinyl Weighs A Ton.” Remember that? After In Your Area and Definition of Ill I was sold on dude. And this project reminds of why I was so impressed with him. This guy raps better than anyone that’s held a spot on XXL’s Freshman class for the past however-many-years they’ve been doing that. I’m hyped on this one, in case you haven’t noticed. Superb features from DJ Revolution, DJ Devastate, Sean Price, John Robinson…everybody showed up with purpose. And DJ Concept? Beautiful samples, beats and chops. 4 stars, 5 mics, whatever – it’s dope.

This one was a hella random come-up for me but I’m so glad that the Universe works in those mysterious ways and comes through like this every now and again. Let me start by saying that there’s something about UK Hip Hop artists that I’ve always been drawn to. Maybe it’s the accent or the colloquialisms, I don’t know. It might be the same way they feel about hearing New York MC’s. In any case, artists like Roots Manuva and Hawk House have made themselves comfortable and steady in my speakers, which is why Si Phili fits right in around here. I believe it was the album cover art that first caught my attention and got me to give this a listen. As a kid, before the internet, I took lots of chances on albums because of album cover art – this would have been one of those cases. And then I got into the music…
Some of that old boom bap that I come back to again and again. I don’t know how long this guy has been at it but you get the feeling that he’s paid his dues and earned the right to say things like “the Kimbo Slice of this rap shit…” Lots of braggadocio and bravado on this album, though style and flavor as well. But, he’s not a one-trick-pony either. His range of topics is well past what most new artists bring to their full lengths. There are a few features that you’ll probably want to gravitate toward before listening all the way through – don’t do that, the whole project is solid. With that said, my favorite track on the album is the Sizzla assisted “Ghetto Trendsetters.” But the Rockness Monsta and Afu Ra joints are nice too.
I can almost guarantee that this album will end up on my end of the year list in 7 months. This one has been heavily rotated since I purchased it and I can’t say enough about it. Stream and purchase below. Do it.

Mike is like a multiple personality rapper in some ways. The way he comes off on record often seems to depend on who the producer is. When he’s producing for himself he’s a lot more abstract and experimental. With this Paul White collaboration project everything seems a bit more focused. There’s no right way to make a record and he does well with each style but this one really resonates with me. His projects have all been solid but if you want to introduce Open Mike Eagle to new listeners, this is the album to do it with. Some of the production gets him into the mood of rapping in a sing-songy way and at other times he puts on his narrator hat and gets into the focus-on-my-topic raps. And all of it comes together nicely. Well done, sirs. A solid effort that should be in the hard drive of any Mello Music Group fan, any Low End Theory frequenter, any Project Blowed fan and anyone who just likes progressive, smart Hip Hop.

IV The Polymath has never dropped anything that I didn’t like. If that’s a new name for you, please go back and check out this dude’s entire catalogue. His production has been the background music to quite of few of my finer writing moments. Lots of his projects are sample free. He composes, produces, mixes and plays almost every instrument you hear. And it’s all top quality. This is just another notch on his belt of quality instrumental Hip Hop projects. This is music for everyday life – the car, the kitchen, the kids and lazy afternoons. Support independent artists and pick up “Never Quit.”

This new RJD2 record is for serious audiophiles only. There are a wide range of styles and moods on this latest record but all of it is funky and fresh. I miss saying that. There’s not enough funky and fresh music out there anymore. So, for that reason, I recommend “Dame Fortune.” Features from Son Little, Phonte Coleman, Blueprint and Josh Krajcik are responsible for the mood changes on the record. RJD2 really made a point to create around his guest artists and build around their strengths rather than just adding them to what he already had. This turns out to be a win-win for everyone involved, including you; the listener.

I can totally relate to this record. The skits and the topics on this album are all on par with how I feel about Hip Hop on most days. It’s funny, smart and just tongue and cheek enough that you can’t hate on any of it. Honestly, I was blown away by this project. I was anticipating a solid effort but this is an extremely well-crafted album. This should be mandatory listening for any artists planning on putting albums out this year. The production is insane. I can’t say enough about the drums, breaks and samples throughout. Anyone else who produces and raps would have put out a 2 disc situation where the raps are on one piece and the instros are on the other. Instead, J-Zone dropped this one the correct way – one solid, cohesive project with rap tracks interlaced with instrumental joints. And it plays out beautifully. I seriously laughed out loud at some of the lyrics on here like “yo, he just said…,” and more than once. This dude is smart, he’s taken the best of what he loves about music and put it into this serving of “Fish-N-Grits.” Dope Hip Hop for the 30-and-up’s.

So, here’s the situation: Fat Beats is putting out this vinyl series called Baker’s Dozen. I, unfortunately, missed out on the vinyl but the digital version has been pouring out of my speakers all day and all night since I purchased it. Yo, I love this record. Dibia$e put together a vibe heavy collection of instrumentals that are the perfect backdrop to any gathering or kick-back you may find yourself in. The samples, including the vocals taken from interviews by various artists, are what drive the feel of this record. 13 tracks to remind you why Hip Hop music doesn’t always require an MC. Listen to how a true master gets down. Stream and then purchase just south of where your eyes are now…

If you’ve been paying attention to Elzhi, then you probably also felt like this one was a bit overdue. This guy has proved himself again and again and people still need reminding. He’s an MC’s MC. Bars, son. Bars. “Lead Poison” is more of what you’d expect. He’s always sounded as hungry on any project as he did on Dilla’s Welcome To Detroit, his introduction to the world. This one is 16 tracks that all revolve around the lyrics. There are a few almost-skippable moments here, though. And it’s only because the production isn’t always as strong as they should be to accompany his 16’s. However, those are few and far between and forgivable when you hear the album all the way through. I’m feeling this. And the album cover art is one of the best of the year so far.

So this one might be a bit of a stretch since it’s not an official release. It is and it isn’t. In March, Wake Self shared this EP with all of this followers digitally. It’s a collection of songs that remained after a laptop with a full LP on it was stolen. He took those remaining 5 records and added two extra, packaged them physically as the “Hold Tight” EP and took them with him on the Preseason Tour that he’s currently on with Masta Ace and Striklin. I picked up a copy when they rolled through our kitchen and haven’t put it down. This dude is the complete package. The EP, with features from Equipto, Raashan Ahmad, Miles Bonny and DJ Young Native, is some of the best music that I’ve acquired in 2016. If the Preseason Tour comes through your area (lookin at you NV, CO and WI) do yourself a favor, don’t miss it and do pick up the “Hold Tight” EP. And in the meantime, check his Soundcloud page and the video below so you can see what I mean. NM stand up!

We’re a quarter of the way through 2016 and so far the we’ve been blessed with quite a bit of quality music. Here’s hoping that doesn’t change. Happy listening, good people.