Several months ago I read a story about some people who set themselves up to live totally off the grid – sort of as a survival experiment. It was supposed to go on for a couple of months, I think. While I can’t remember all the details, the one thing that stuck with me was that nearly half of the group couldn’t hang with the experiment and it wasn’t because they couldn’t bear the cold, or couldn’t handle chopping their own lumber for warmth. It was because they couldn’t handle being without nicotine or caffeine.

The closest I’ve ever been to being dependent on any substance has manifested in cravings… like, I “need” chocolate – and I “need” coffee. But really, deep down, I’m able to see that these are just desires. I want chocolate and coffee; I don’t need them.

I do see though, that on the days I allow myself to have these things – coffee especially – my desire for it comes up stronger and more often and pretty soon I’m back to having it every day. And while I don’t really see anything wrong with having a cup of coffee everyday (unless you’re drinking it with a ton of sugar), I don’t like the feeling, or the idea, of some foreign substance occupying my brain.

So, for the past several months I’ve only allowed myself to have coffee on the weekends – if I’m gonna have it at all. Most of the time, I aim to be caffeine free. While you might be gasping at how crazy that is, hear me out…

First of all, the only thing we should be dependent on is ourselves. When something or someone else is running the show, then we’re not truly living. When we become attached to these things to the point we feel we need them to survive, then we’ve got to re-evaluate our priorities. Who are we, really?

This is all to say that this dandelion mocha can be used as a coffee replacement, or as a way to wean yourself off of coffee should your heart desire. Your heart speaks to you, it does. But if you’re not ready for such a thing, or you’re not buying into this lecture, make it anyway… cause it turns out dandelion root is the bomb. 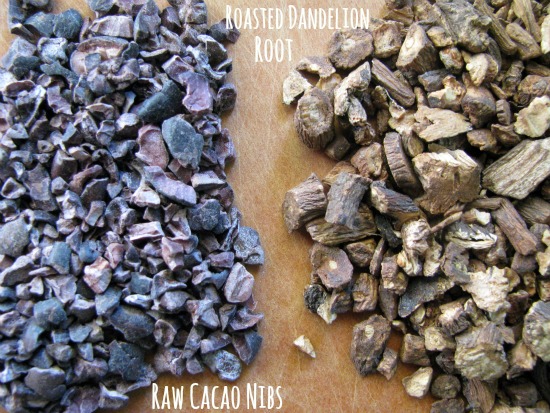 You heard that right. Dandelion, like the weeds. It’s antibacterial, anti-inflammatory and enhances overall wellness. Specifically, it’s really good for the liver, so cop some roasted dandelion root and keep it on hand for those days after you’ve had so much to drink you’re organs hurt. This will give you a gentle boost, while cleansing your system.

You can buy dandelion root at your local apothecary or from Mountain Rose Herbs.

Dandelion Mocha from The Herbal Kitchen by Kami McBride

Bring the water to a boil, then pour over the dandelion root and cacao nibs to make a tea. Let steep for 30 minutes. Strain the tea, add the remaining ingredients, and reheat. Drink up.