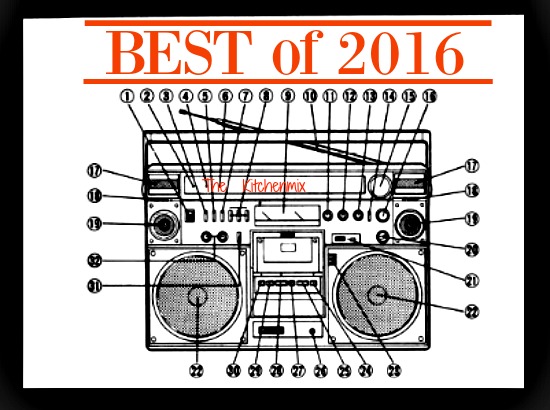 2016, you were not messin’ around were you? Most years just kind of blend into the next with no real distinction in the flow of time. Some years sear themselves into our collective memories and make sure they’re never forgotten. 1865. 1945. 2001. And the most recent…2016. These are revolutions where humanity as a whole felt up against the ropes waiting – hoping for the bell and the next round. I think we all pretty much felt that way about the past 365 and 1/4 days.

Thankfully, music is always there to get us through…ease the pain of life’s pimp slaps, if you will. For myself, this was a year where many of the greats of my youth added to their legacy, kept their names off of the “Where Are They Now” lists and reminded me why I’ve regarded them so highly after all these years.

These were some of the most played projects in our household in 2016:

Love this project so much! Everything Jean touches is gold. If you don’t have this yet…get it!

Mr. Consistency does it again. Another solid effort from the master of rhyme styles. Most people who rhyme over beats have predictable subject matter. Not Boy Sands. It’s always new and fresh!

This jazz fusion record is so damn smooth and funky. I was blown away by this project. Most of us know Black Milk for his mic and production skills. This is his alter ego leading a band.

2016, year of the old school revival. Man, so many of the great artists of my youth put out stellar projects this year. Craig G’s latest was exactly what old fans like myself hoped he’d put out. No filler, no frills. Just quality beats and rhymes.

If there was one album that I recommended more than any other this year, it was Malala. If you want something that says something…this is for you. I can’t say enough about Wake Self and his integrity as an artist and stand-up human being. Hip Hop for self-mastery.

A mostly instrumental project that’s perfect for any situation. Play this for ya moms.

Ugly Heroes. Everything In Between.

Red Pill, Apollo Brown and Verbal Kent each deliver the goods with another solid project from the Detroit trio. Dope from end to end.

I only have 16 projects on this list and 2 of them come from Kemba (formerly known as YC the Cynic). This is music for the times. A poignant album that needed to be made. Soulful with messages aplenty.

I believe that most of the songs on this mixtape were recorded prior to 2016 but since it dropped this year and I listened to it so much, I had to include it. Great features and a nice introduction to the artist soon-to-be-known-as Kemba.

I am a collector of Jazz today because of early 90’s Hip Hop albums like Jazzmatazz, Low End Theory and Reachin (a new refutation of time and space). I loved the blend of the two genres and it ended up defining the type of music consumer that I am today. This project fills the void for a Hip Hop/Jazz genre.

Lando Chill. For Mark, Your Son.

I don’t think it’s an accident that dude’s rap name ends in Chill. That’s exactly what this album is. I love Lando’s vibe and approach to song writing. Minus one song (Save Me) this is a very strong freshman project! I had Floating To Nowhere on heavy rotation this year.

Woah. I didn’t even know Common had something in the works when this dropped. Striking the same chord as Kemba played on Negus, this is Common’s best work since Like Water For Chocolate. Take heed.

Grand Puba. Black From The Future.

I’m a huge Puba fan so this was a no-brainer for me. It’s not a perfect album but fans of his old work will be very pleased.

A Tribe Called Quest. We Got It From Here…Thank You 4 Your Service.

Easily my favorite album of the year. This dropped in November and was still able to receive more play than any other project that came out in 2016. I was blown away by this project. Honestly, I wasn’t expecting it to be as good as it is. Thank you Tribe. RIP Phife.

De La Soul. And The Anonymous Nobody.

De La Soul is my favorite group of all time but this project does not fall into the category of their top 3 or 4 or 5 albums. It’s good enough to find itself on my list of favorite albums but not their best work. Very strong cuts sandwiched in between some throwaways. Pos is still on my list of all-time favorite MC’s, though.

I’m a sucker for storytelling and conceptual projects. Back that up with quality production and well-placed features…it must be another classic Masta Ace album.
_________

4. The Other Guys. Life In Analog.