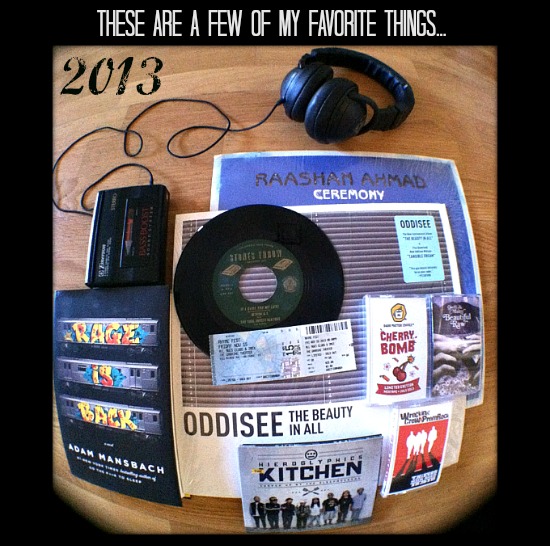 “All missions impossible are possible, cause I’m
heading for a new sector 365 days from now” -The Pharcyde

Although I’m calling this “Best of,” it’s really more my-version-of-a-Julie-Andrews-list chronicling my favorite things of the past year. I’d hate to come off pretentious by creating some sort of ordered inventory that I’d expect others to subscribe to (and what’s the point of arguing a number one vs number three placement). So, in order to avoid having to justify my choices for what should be considered the “best,” what follows are a few of my favorite things from the last 365 days…

A list of books that I’ve read this year won’t be necessary. Not because I haven’t read that many, rather because there was only one real stand out – a book that I talked about and shared with anybody that showed even the most remote interest. If you have not read Rage is Back and you’re a Hip Hop head or have an interest in graffiti culture, umm, sleep is the cousin of death – wake up! How would I describe it? It’s like an ode to Hip Hop culture intertwined with a sci-fi, metaphysical, past meets the present, hella witty blend of Dark Days and Bomb the System all the while maintaining a B-Boy flare. Author Adam Mansbach really laced us with something extra special with this one.

And don’t forget to grab the J.Period soundtrack to the book…

There were quite a few amazing performances that I was lucky enough to witness this year. I really enjoyed the Julieta Venegas show that wifey and I were able to have a date night for. The Stones Throw Soul Tour was incredible. That was definitely one that you didn’t wanna miss. As far as Hip Hop shows, you couldn’t really front on the line up for Equipto‘s Stress Free Tour. That was a good one. I also got to see Pharoahe Monch again! But it was the festivals that really stuck with me this year. The Kings of the Mic Tour wasn’t super extraordinary but c’mon, we got to see De La Soul, Public Enemy, and Ice Cube all on the same night. But my favorite was probably Rhymefest L.A. Maybe it was the fact that several of our friends were on the bill that night. Or maybe it was the fact that attending a Hip Hop festival turned out to be a weekend getaway for me and the Mrs. Here are some of the highlights.

Ah, so much good music. Lots of stand-outs such as CharlieRed and The Stuyvesants. If you haven’t heard of either of these, we haven’t hung out enough. I spent the better part of the year hyping their projects to anyone that would listen.

There were several projects that came out this year that involved gathering lots of top notch rappers and putting them all on the same album. Tony Touch grabbed 50 of his favorite MC’s and put them all on his Piece Maker 3 project. MidaZ The Beast also gathered a nice collection of producers and guest spots for his album. Lewis Parker helped himself to some quality artists as well. But nobody did it better this year than Kid Tsunami, Marco Polo and DJ Dister.

Kid Tsunami. This Australian release hit me like a sucker punch when I first heard it. Look, dude was able to put Buckshot (Black Moon), Chubb Rock, Pharoahe Monch and Jeru all on one track. That’s some serious clout. The project is solid front to back and if you’re a longtime Hip Hop enthusiast, you’re going to appreciate the plethora of cameos.

Marco Polo’s Port Authority 2. Alright, nobody has been able to bring Organized Konfusion together on the same track for like 10 years. That’s gotta say something about Marco Polo. So many of my favorite artists all included in the package. Get it.

DJ Dister’s Roll Wit Dis. Germany has always supported quality Hip Hop. True students of the game. Which is evident in this project that’ll remind you why you started enjoying Hip Hop in the first place. Let’s see, who’s on this one? Artifacts, Kool Keith, AG, KRS-ONE, Jeru, Lords of the Underground, and this dude…

But what else?
-Well, Shad dropped a dope EP (that I reviewed) and solid LP this year. This kid a breath of fresh air. He’s the real deal. The true school of the new school. Check him out.
-Hieroglyphics put out The Kitchen and I had that in the car for a few months straight. It’s not their best effort but there’s so much individual talent in that crew that they could rap to static and make it sound nice. The album was more of a collage of already made tracks but it worked.
-Everybody’s favorite, Oddisee, put out a double album (well, one was a “mixtape” but call it what you want, it was 2 solid projects in one). Grab the ice blue vinyl if it’s still available. I did. This is some anytime music. It’s a go-to for when I have people over.
-Qwel & Maker put out a purple tape (Beautiful Raw) that I’ve had in my deck for days upon days now. I should probably be getting a commission with all the copies they’ve sold from my recommendation. But I’m just happy to have one of the 200 tapes they had made.
-There were a few other tapes that have stayed on hand this year. Two by way of the good people at Cherries Records (Cherry Bomb and Just a Touch).
-Also, Wrecking Crew put something special out on cassette and that comes with a seal of approval from yours truly. And I’m not just saying that you should add this to your collection because these guys are super good people, they can also do the Hip Hop thing pretty good. Cop it.
-I learned about Hawk House this year, a pleasant surprise (another one that I’ve been trying to get people to DL). I can’t wait to see what these kids have in store for us in the near future. Some raw talent here.
-That new Roots project with Elvis Costello is well worth the purchase, too. Honestly, I wasn’t all that familiar with Mr. Costello but I’m a fan now. Mr. Questlove can do no wrong.
-Oh, Myron and E. Their album, Broadway, is everything good music should be. I love it. Soulful goodness. Glad I had the opportunity to see them live and chop it up with E.
-YC the Cynic (this kid is incredibly talented…is he a genius?) dropped his full length this year. I copped it. You should too.
-Aceyalone gave us Leanin on Slick and that one had me up outta my chair like Yo Gabba Gabba does the kids. It sounds like a record that samplers have been sampling for years now.
-Factor’s Woke Up Alone was probably the finest concept album to drop this year. That guy just does not make bad music. Had this on heavy rotation this year. Some great guest spots that really helped bring this album together.
-LMNO thought we weren’t listening so he dropped After the Fact just to remind us that Long Beach is still in the house. More consistency from Leave My Name Out. I can’t get enough of the first track.
–Raashan Ahmad. He dropped Ceremony this year. I had to spend that extra plane ticket tax to get the vinyl copy from Berlin. This album is so amazing and I can’t stress enough how much I have enjoyed it this year. What’s good about it? Well, similar to Blitz the Ambassador’s The Warm Up, it just has that international feel. It’s a wholesome album that has something for everybody.
-It’d be a pretty close call but 8thW1 and PVD put out Lux DeVille and it could have been the most played album in my house in 2013. Some beautiful jazzyness. Check out my review.

I didn’t get to check out too many movies this year. There were a few independent films that are worth sharing. The most notable being Sample This. It’s a story within a story within a story that tells the story of one of Hip Hop’s most sampled tracks – Apache by The Incredible Bongo Band. Definitely worth checking out.

As far as big budget features go, I really enjoyed seeing Gravity in 3D. I’m not recommending it, I’m just saying that I had a great time watching that movie. It was like a roller coaster ride and I just went with it. If you missed it in 3D, it might not even be worth checking out. That was a big part of why I enjoyed it so much. And if you didn’t check out the short film that accompanies it, you can check that out HERE.

So much good food was consumed this year. Anything that I’m excited about that we made can be found in our recipes section. In terms of eating out, which we don’t do too often, there are a few places that I’d recommend that we had this year. If you’re in the L.A. area and want a meatless meal, try Green Leaves. Our dude, Scarub put us up on this place. Lots of options. If you’re still in the area but want some (clean) meat with your meal, go with Burger Lounge. That is the spot!
Another spot that never lets us down is in the small town of Bisbee, Arizona. My brother lives there and every time we visit we make a stop at The High Desert Market. Everyone will find something they can eat here.
And in Phoenix, The Main Ingredient is a place you need to check out. Good beats in the background as you get your grub (and a beer) on. Yeah, it’s named after that Pete Rock and C.L. Smooth album. I’d go with the Chali Tuna.

A Walkman. Man, I missed having one. I carried one with me at all times for years. Years. Unfortunately, as technology changed so did I. So, earlier this year when Redef Records offered a combo pack consisting of a Klaus Layer tape and a Walkman…it was a no-brainer. I’ve been rocking that thing ever since. Feels like I’m 14 again. Get you one.

It’s been a good year. We’ve experienced quite a bit. So many amazing blessings have come into our lives and many are a direct result of running this site. In this past year people who we followed as fans, now consider us friends. We shared feasts with some incredible people. I’ve interviewed several of my favorite artists and had those posts shared widely across the web. It’s been quite a ride. We really look forward to what this new year has to offer. We’re focused on bigger and better things and I hope you are too. Don’t make aimless resolutions this year, make attainable goals for yourself that you want to create. This will be a big year for us. Trust. That’s one of my New Year’s resolutions. Cheers everyone!

First of all, what the heck is tapping? Tapping is a way to work with psychological issues by very…