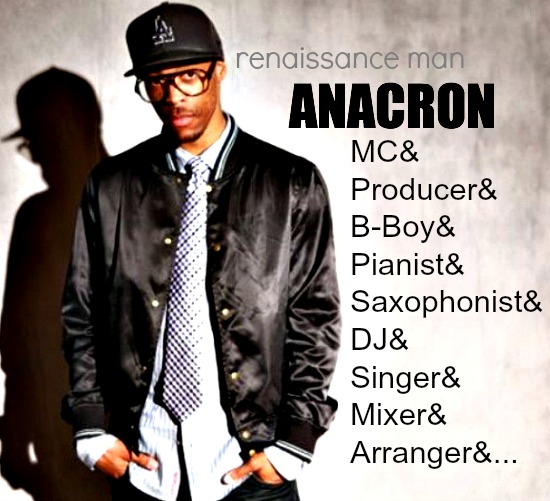 “Born on the 12th of October
Never smoked, never drank, lifelong sober
overstated is underrated since the beginning
When in second grade it was stated that I was a musician
From piano to the sax and now the woodwinds
Lessons from jazz legends where Inglewood is
From the vinyl to the tracks and bumping good blends…”
– Anacron

I remember visiting the Picasso Museum in Paris for the first time. Now, I’d venture to assume that if asked to share their familiarity with his works, the general populous would probably only go as far as mentioning his involvement with cubism. I was guilty of being in that category at the time (even though wifey has Art History credentials under her belt). So, imagine my amazement at the wide variety of works over various mediums when I got there. Yo, if you didn’t know…on the artistic tip, dude did it all. Collages, sculpture, true-to-life portraits – a jack of all trades. Respect for that. I became a bigger fan after that.

When it comes to music, I tend to have the same amazement for artists who can do more than just the rappity rap thing, and do it well. Today I present to you one of Hip Hop’s jacks of all trades. This dude produces, raps, sings, plays live instrumentation, dances, writes – and does them all very well.

Anacron is the latest in the main courses we’re serving up to the masses. And he’s come with some recipes that you’re probably gonna wanna add to your repertoire. We chewed the fat on several of the usual topics, and you can catch most of that down below. I didn’t transcribe the full interview but you can get the full audio of that conversation via Soundcloud if you just keep scrolling (we chat it up over a beat by the big homie, K-Murdock who just released a dope FREE project).

But before we get into the interview, let me show you what I mean by multitalented. This first track is a re-imagined dedication to Pete Rock and CL Smooth’s “They Reminisce Over You.” Dude writes, performs, produces, mixes, plays all the instruments and raps to create this freshie. The track immediately following showcases some rap and saxophone skills. Multitalented.

I’ve had Anacron in my headphones for a good while. The first time I heard him, as far as I can recall, was on a Galapagos 4 cassette called The Blackbook Sessions (I’m sad to say that after all these years that tape was eaten up by a busted cassette recorder this summer).

After that, he joined up with two other super dope rhyme sayers, MURS and Himself. They put out an album called Pals, whose title always reminds me of the movie Young Guns.

You can stream the CLASSIC by Anacron, MURS and Himself here:

You can go ahead and stream and purchase most of his music HERE. But for now let’s get into some food and music talk. As promised, you can listen to our conversation below and then scroll below that for the text and highlights.

TKM: How would you say that food relates to the creation of your music?

A: Well, for one, food is the substance that you need before you can do anything. You need the energy, you need to get your brain power – all the vitamin and minerals and everything in it. And then aside from that, just the process of cooking is a form of artistic creation in itself. Doing that is just an extension of who you are creatively and what you’re capable of doing. I think that the way you approach the kitchen – at least the way I approach the kitchen, can be the same as the way I approach the studio. I try to approach everything with an outlook of taking something that someone else has already done and forming an extension of it that goes beyond where other people may have thought of taking it before. That’s kind of the way I approach everything – dance, emceeing, singing, song composition, the instruments I play, deejaying, graffiti, all the way down to the stuff I rock on the stove top.

TKM: You get down in the kitchen pretty good?

A: Yeah, you can stroll through my Instagram at any given time and see the meals that I’ve prepared.

A: I’m more of an all-American comfort food type of dude. My go-to for dinner, for sure, is steak. I can throw up a fillet like nobody’s business. Really. And anything breakfast related, I’m guaranteed to tear it down. But then I really like fish – orange roughy, talapia…but usually meat dinners and sides. I keep it real simple but there’s a level of complexity within the simplicity that I deliver. It will be a real basic steak, potato and vegetables type of meal. But with the steak it will be a garlic encrusted steak with sea salt on top. And then I’ll do a side of string beans with fresh ginger and honey and potatoes with cayenne pepper…I just like to take it to another level.

TKM: Have you been to other countries and experienced food culture in other places?

A: Oh yeah. France for sure. I love the cooking in France, it’s awesome – of course their pastries. Their meat and steak and the way they prepare everything there. I’ve been to Japan a few times and I think my time there was awesome. I really enjoyed – I don’t eat a lot of sea food, but I ate a lot of sea food every time I’ve been to Asia. My other favorite is Ethiopian food. I was there when I was a kid. My family lived in Africa for like a year and a half. My father is a professor at UCLA but at the time he was commissioned to do some work at the University in Zimbabwe. So we lived out there while he was doing that and we zig zagged across the continent. And hit up damn near every country. So, Ethiopia was one of the stops.

TKM: Wow. That’s dope. Well, can you talk about some of the projects you have on the horizon?

A: I’m currently in talks with my man, N8 the Gr8, who I’m sure you probably know from The Cuf. N8 and I have been discussing on and off about doing a collaborative project together. Similar to a Jaylib sort of thing where we collaborate on the beat and collaborate on production. That’s something I’m real excited about doing. That dude is one of the most overlooked and best producers ever. That dude is extremely talented so I’m looking forward to that. I’m going to be doing some stuff with an artist from the UK. She’s actually a model who just recently started releasing music. Her name is Sassy-An. She’s a dope singer. She and I are working on some stuff. I’m working on some stuff with an artist from New Jersey named Ashley Jones. She and I did this crazy freestyle that you can find on my YouTube page. From then on out we were like, “Yo, we got to work on something.” So, she actually just got to L.A. We’re going to be working on some stuff. And then other than that just the homies in my crew – Peanut Gallery Network. And of course my own solo projects that I just continue to roll out. Usually mostly singles and EP’s. Everything I’ve been dropping in the past couple of years has all been digital but I’m working on something for vinyl.

TKM: Excellent! Well, I’m definitely looking forward to that N8 the Gr8 collaboration. Can you share a recipe with us?

This is one of my daughter’s favorites, so I named it after her turntable alias. It’s a cheap, quick, and easy variation of a timeless college dorm classic; so it’s perfect for an on-the-go lifestyle.

Scramble and fry egg into a plain omelet

A recent breakfast favorite that I devised from a photo on Instagram. Another simple recipe that takes a little more time, but well worth the wait — This is heaven for anyone that loves avocado and eggs as much as I do.

Slice avocado in half; toss the pit unless you’re planning on growing an avocado tree
Poke holes in ends of egg; gently blow out egg whites into bowl
Crack eggs to drop yolk into center of gutted avocado halves
Top with pat of butter, coarse pepper, onion powder, and sea salt
Bake at 425 for 10 minutes, or until desired yolk consistency

Melt butter into heated pan
Add chopped / shredded spinach and fry until softened
Remove a teaspoon of spinach for garnish
Scramble egg whites with teaspoon of half and half
Pour egg whites into pan and scramble with spinach; season with sea salt and onion powder

I’m telling you, this guy is a modern day Renaissance Man – add cooking to that already long list of skills on his utility belt. Find him on Facebook, Twitter, Soundcloud and whatever else you can think of. Hit him up, say hi, give him a like or a friendly tweet. It sounds like he’s got quite a bit of goods to share with us on the horizon. And in the meantime, if you aren’t familiar with his old stuff – now you’ve got something to do this weekend. Chalk this up as another fresh artist in the Kitchen Mix pantry. Don’t go too far, we’ve got lots more stuff up on the menu.

I’mma sign off with this beautiful track off of the PNTGLLRYNTWRK compilation project. Enjoy… 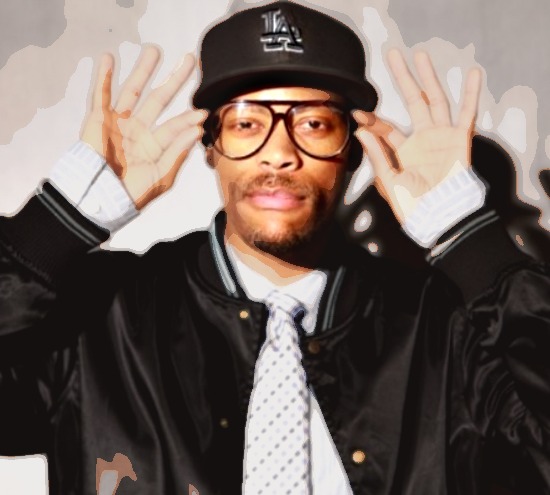 Yo, Oddisee is one cool fellow. This dude is genuine, down to earth, open, introspective…an everyman type of guy…