Man, days go by and seasons change. F’real. There was a time in Hip Hop’s history when there needed to be an explanatory piece on the back of a record so you would know what you were getting into. 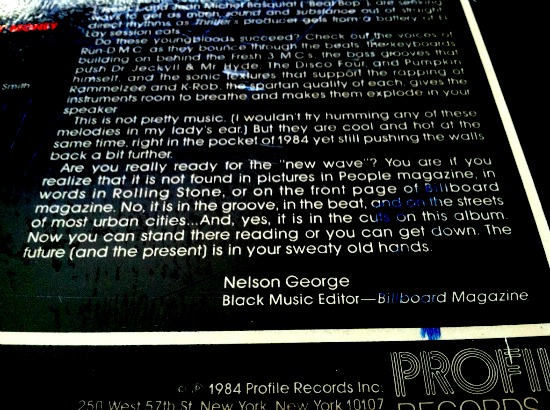 “The future is in your sweaty old hands.”

I’ve mentioned several times before the respect I have for writer, director, critic and Hip Hop historian, Nelson George. This dude has, by chance and circumstance, been at the forefront of documenting Hip Hop from its infancy.

Check out this quick write-up he did that was placed on the back cover of a Profile Records sampler/compilation from 1984. You talk about signs of the times – at the time that he penned this his official title at Billboard Magazine was “Black Music Editor.” Soul, Funk, RnB, Disco and the new kid on the block, “rap,” were classified as black music. I’m curious to know what the title of that position is today.

Anyway, I’ll let him take it from here… 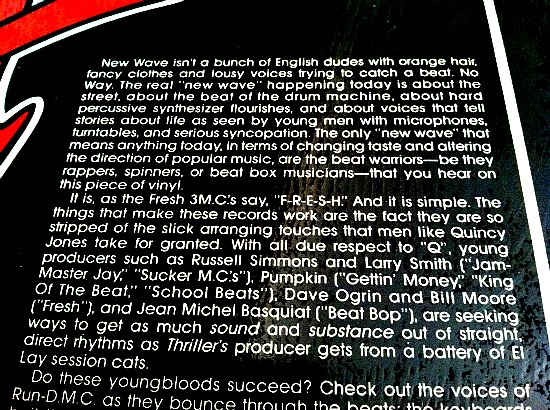 I like how the term used for the Dj is “spinners.” And did you notice the reference to “young producers such as Russell Simmons?” I’m pretty sure he didn’t produce anything but it doesn’t even matter now because that was the credit he was given before he became Hip Hop’s first mogul.

“This is not pretty music.” 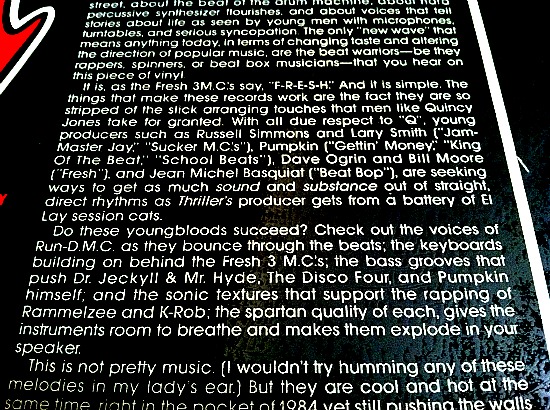 Here’s what stands out here, for me – He poses the question, “Do these youngbloods succeed?” Well, here’s what became of some of these “youngbloods”, now in their 50’s: Russell Simmons went on to co-found Def Jam Records and bring Hip Hop to the world. The man known as Dr. Jeckyll in 1984 would go on to found Uptown Records and take under his wing one Sean Combs (Diddy or whatever he’s calling himself these days) as well as sit at the desk that said CEO at Motown Records, and Jean-Michel Basquiat…well, yeah.

KRS-ONE said, “50 years down the line, we’ll be the old school artists.” Well, this record came out 29 years ago and in musical terms that’s like 4 or 5 generations. So yesterday’s “new wave” is today’s old school. Many people won’t even feel the tracks on this record because of how simple and stripped down they are. Me? I love it. I’m an old school head, an old fool for the old school.

These are a couple of the cuts from this record:

YIKES! Tomorrow is Valentine’s Day. I don’t know what it is, but I just can’t seem to keep up…