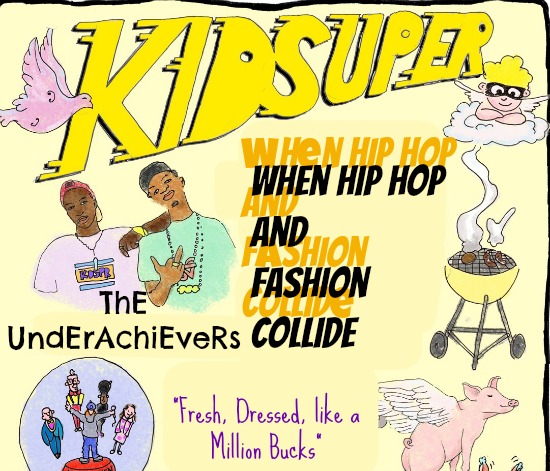 “Some new fits, some new kicks
I often do this cuz it’s the pits not bein’ dipped” -Souls of Mischief (Tajai)

Probably since the genesis of Hip Hop culture, fashion has been a centerpiece in the game. I mean, if you were to take a look at the origin of what would eventually become known as Hip Hop you’d see that on August 11, 1973 DJ Kool Herc threw the first basement party (considered by many to be the founding moment in the culture) to help raise money so his little sister could have fresh new school gear. Translate that as a Hip Hop houseparty to keep lil sis freshly dipped.

See, these young cats teamed up with another equally young and talented dude who has created an about-to-blow-up clothing line and identity called KidSuper. Both The Underachievers and KidSuper are unlikely success stories that converged at the right time to help each other expand on the advancement of their brand and identity. All three of these guys (the 2 MC’s and the designer) are 21 or 22 years old! Both have amazing back stories. You can read up on The Underachievers HERE and KidSuper HERE.

Anyhow, in order to showcase his new line of fashion, KidSuper chose to have a music video be the stage for the wold to see. Everything from the bucket hats to the reversible baseball jerseys that the MC’s are wearing were designed by KidSuper. The icing on top is the fact that the track is super dope and so, might I add, is the stylish gear that they’re rocking. This is a glimpse into what you can expect to see when you enter his new store that he just opened in NYC. For the emcees, they’ve already started to make some major buzz. So much so, in fact, that they caught the attention of Flying Lotus, who signed them to his new label. So, be on the lookout for more from them very soon.

Hey, if you’re gonna support a clothing label, might as well make it your own. This joint is still the jam! Classic Wu material.

Whatever these dudes got from Adidas for this song…I guarantee it wasn’t enough. Hip Hoppers were already rocking Adidas before this track ever came out but this one right here was the official marriage of Hip Hop and Adidas. Quite possibly the reason I’ve kept a fresh pair on deck after all these years.

Showing mad love for LRG. I always wondered why the Living Legends never did a dedication song for LRG. They’ve been receiving free gear from these dudes for years.

Last, but not least, is the probably-took-it-one-step-too-far dedication to Ralph Lauren’s Polo line. Check out Thirstin Howl III’s dedication to the ‘Lo…

If you’d like to check out more music from the young duo that call themselves The Underachievers, you can download their latest mixtape HERE. Or you can just stream below…

Feel free to share some of your favorite odes to dope gear in the comment section. Stay freshly dipped people. Presentation is key.