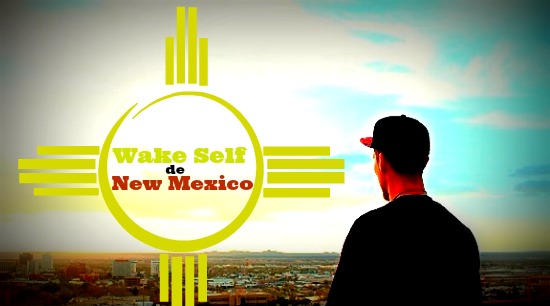 One of my favorite tracks by 2Pac is the slept on nod to the old school aptly titled Old School. I think it’s just the fact that it’s a “this-is-hip-hop-culture” in under five minutes. Pac wasn’t all thug everything, he was also a student of the game. At the end of the track, he reminisces –

“Remember seeing Brooklyn go crazy up in the motherfucking party?
Remember motherfuckers used to go, “Is Brooklyn in the house?”
And motherfuckers would lose they God Damn Mind!”

Yo, people from Brooklyn loooooove that they’re from Brooklyn. An album later, Pac made the West Coast go crazy with California Love. All of these regional anthems in Hip Hop always made me wish that I had a true place to call home – I spent 11 of my formative years in a military community overseas. I went from child to adulthood living in New Mexico. I spent 8 years in the Land of Enchantment and have a special affinity with the place. There is no place and no people like what New Mexico has to offer. Even though I haven’t lived there for about a decade, that’s the place, here in the U.S., that feels the most like home to me. That must be why NM MC Wake Self holds a special place here in our Kitchen.

If there’s anyone that I want to see as the face of New Mexican Hip Hop, it’s Wake Self. This kid is incredible. And he reps his home state to the fullest. But it’s not just that he loves NM like I love NM. He is equally skilled as a writer and performer. His lyrical content and delivery are both at the upper end of the Hip Hop skill pyramid. We’ve shared several meals together and had plenty of food and music talk over the course of our friendship but it’s time we shared some of that dialogue with you. So that you could get familiar with one of our favorite MC’s, we did the formal interview thing and here’s some of that…

How does food relate to the creation of your music?

Food relates to every aspect of life. Your eating habits contribute to your mental, physical and spiritual health. I personally feel I have to honor my body and make sure I eat well and respect the food I eat. Like the old clichė goes, “you get in what you put out”. If you put a lot of unhealthy food into your body, you won’t be able to perform or live to your highest potential. To me everything in my life relates to the creation of my music. So to me food, music, exercise are all a part of my process of life. They all correlate and intersect in various ways to provide inspiration and fuel to each other. I’ve also always believed that hearing a great song has a similar effect on a person as eating a great meal. I wanna make sure I feed people the best possible offerings I can create, and that begins with being conscious about my own personal diet.

Do you get down in the kitchen? How would you rate your kitchen skills?

I definitely do work in the kitchen, I cook at least once a day. I’ve been complemented by loved ones and friends about my cooking pretty often. Now my DJ [Young Native] is another story, he needs a little help in that department. haha

Have you always been health conscious or was there an event that prompted it?

I became a vegetarian at around age 14 or 15, so it’s been a long time. My parents used to garden and we would always try out different fruits and stuff like that. I started getting down with an all elements Hip Hop crew Foundations of Freedom (FOF) and a couple of the homies were vegetarian, health conscious people. That definitely reinforced a lot of the ideas I was already starting to have when I was about 14.

I really wanna grow more food, I think it’s very important for us as humans to put our hands in the soil and work with the Earth. I’ve worked on many gardens in the past and would like to start some community gardens out here in Albuquerque. I used to help my brother Mike 360 with a community garden years ago. My parents always had a garden, like I said, as well as my grandparents on both sides. I also buy as much local produce as I can. It cuts down on pollution and is a great way to support local commerce in your own city/town. I completely stay away from fast food, and soda. I’m working on becoming fully vegan and gluten free. I really got a sweet tooth though, it tampers with some of my dietary choices. haha

How does touring affect eating habits?

It can be tough. Time scheduling can leave you with few options to get a healthy meal sometimes. It’s all about being creative and clever with your time and choices. I’d rather go to bed hungry than eat at a 24hr fast food spot. Usually I might go to a health food store when I get to a city and stock up on 2 meals and snacks for the day. I’m not a ballin rapper who eats dinosaur eggs and sprinkles gold in his smoothies, but I manage.

What do you think are the biggest challenges we as a people are confronted with in terms of food?

Our laziness to take the initiative to not be wasteful and also to provide ourselves and our families with educated alternatives. I really think a lot of people have their priorities backwards. People will spend all their money on alcohol, weed, clothes, cars, electronics but they complain about food prices. People don’t wanna buy organic because it’s too expensive, yet they will spend all their cash on some material possessions or partying. I see people driving in nice cars to take their children to McDonalds. I’m not trying to be holier than thou or anything, I just think people should pay more attention to the health of their families and themselves. Obviously the GMO industry is a horrible, awful movement for humanity and the earth. So many people being poisoned and the Earth being treated irresponsibly by the Monsanto Corporation. We need to find a way to get masses of people to stop doing business with them and to stop purchasing their products. I know it’s difficult when you are low income and struggling, but food stamps are accepted at health stores. Local farmers sell produce for very cheap, and you can always learn to grow your own. There are definitely ways to eat healthy on a budget.

I’m simple man I don’t know. Is their a world famous vegan chef? They can make me a meal.
Random homeless person who was hungry, maybe that’ll be my new thing instead of giving them money. I’ll cook something up and hit the streets afterward.

Your last album is called the Healing Process. How does food factor into this?

Well, food is medicine, and I think until we all embrace a more health conscious approach to food the world can never fully experience true healing. Have you ever had a homecooked meal from a family member, loved one or friend that completely turned your mood around and just left you with an incredibly happy feeling? I can go on with examples about how food can heal us. You hear about it all the time a person changes their diet and becomes healthy again. I think we have to look at what we eat and what states our lives and bodies are in and find the connection to understand how we can grow and live to our optimum health and happiness.

What are the best cities for food? Any specific recommendations?

Anywhere in New Mexico – all green chile everything. I think green chile might actually be the elixir of life. Haha. I love eating and trying new things out, so I would recommend wherever you go don’t eat at a chain restaurant, explore get some authentic cuisine and try something new.

True or False: You are what you eat.

True. I am Green Chile. haha

If you were writing your own Wikipedia page, what would you want to be said about yourself?

I would say go listen to the music. The person is secondary, the art is the main attraction.

The universe, the everday struggles of the commoner. The mistreated, the misinformed, the misunderstood, the unjust leaders and corporate slave masters. The kids who don’t fit in, the strong mothers, and the great visionaries of past and present.

What do you think are your responsibilities as an emcee?

To inspire change, to speak on the state of society. To study the history and deliver truth and wisdom. A real emcee is almost like a super hero, they combat the ignorant and evil forces in the world. You gotta master your craft as best as you can and then pass the knowledge to the next generation.

Who would you really want to work with musically?

Whoever is passionate about making a change, and bringing consciousness to the planet. I would love to rap over beats from Kanye West honestly, he’s an amazing producer. I would like to rhyme over some production from Gramatik, L’orange, Bonobo, Just Blaze, Oddisee…there’s too many dope producers. I would like to record with some old school soul artists who are still around like The Delfonics, Heatwave, The Spinners, Evelyn King, etc.

What projects do you have on the horizon?

So many projects on deck. Look out for the next album this fall, this is a promise right here. I will be releasing something new before the year is up!

We will absolutely be on the lookout for that new new but in the meantime, make sure you head over to his website and grab Good Things Happen to Those Who Wake as well as a two other projects that can be downloaded for free. The way that Wake Self comes across in this interview and in person is exactly what you get from him as an MC. He’s honest, sincere, and conscious about that higher elevation and knowledge of self. His lyrics are some of the most powerful and profound that I’ve heard in a good while. It’s a positive vibe that’s infectious and puts you in that positive state of mind. And let’s not forget that he reps New Mexico to the fullest. In fact, on August 5th you can see the world premier of his new video that I think is the anthem that NM Hip Hop heads have been waiting for. I’m extremely excited to see that video, which was filmed all over the great state of New Mexico. Be sure to follow my dude on Facebook and Twitter. He’s also on Instagram @wakeself. New Mexico stand up!

(Here’s an older video with Wake Self and his crew Zoology. The second MC you see going in, Concept Flux, is also the man behind many of the best videos coming out of NM and AZ.)