Recently my friend introduced me to Market on the Move.  Market on the Move is a “food rescue” program that takes food from major grocery stores that would otherwise be discarded.  The amazing thing about it is that you can get up to 60lbs of produce for a $10 donation.  The downside is that it’s conventionally grown.

I have to confess that, at first, I was a bit hesitant to take the food because it wasn’t organic.  But then I realized a number of things:  a) when we go out to eat (not very often, but still) it probably isn’t organic, and b) I could be starving one day and will look back on this and wonder what the heck was wrong with me.

I love the idea of rescuing food!  I saw a story on CBS Morning a few weeks ago about a teacher in New York City whose entire diet came from rescued food, or food from the garbage.  We waste way too much food in this country.  And though I try to be cognizant about it, we are guilty of wasting in our household too.

Anyway, I’m was really happy with our bounty!  I got a ton of stuff, things that I wouldn’t  otherwise have had (or not in that quantity), which has given me a bunch of opportunity to explore recipes that would have never come into our lives otherwise.  Check it: 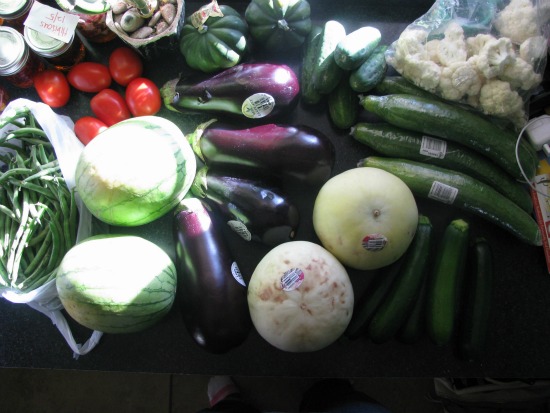 The recipe here is definitely something I would have never thought to try if I just bought eggplants on my own.  I shared it with my family (obviously) and a friend and everyone loved it.  Also, aside from the roasted eggplant, it’s totally RAW.

Perhaps it’s even tasty enough that Oddisee would like it?

Speaking of roasted eggplant, the recipe called for roasting these on a grill, but I didn’t want to mess with all that.  Instead, I resorted to a method I had seen performed by Aarti Sequeira on YouTube:  roasting them over a gas oven range!  Simply poke a few holes in the eggplant, wrap it in foil, and place it on the range at a medium flame. 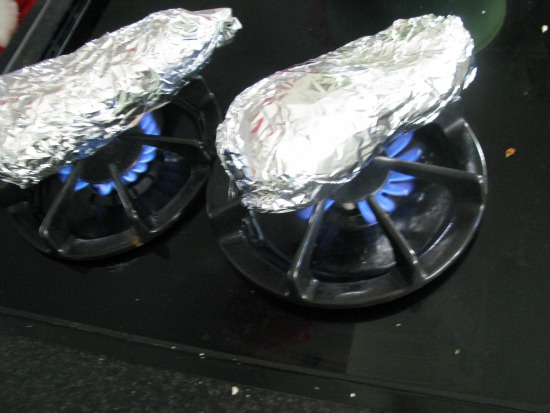 Rotate them every five minutes or so until it’s super floppy and it’s done.  Wait until it’s cooled down to open up the foil (cause it’s dang hot!) … 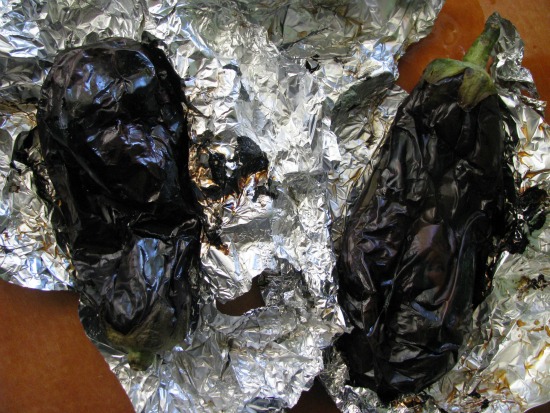 I really like the way the charred skin of the eggplant mimics the texture of the foil.

Cut the ends of and peel off the skin.  We’re now ready for the recipe!

Method:
Grill or roast the eggplants. Cut the stems off the eggplants and take off the charred skin. Tear the eggplants into long strips and discard the seeds. Transfer to a bowl.

In a small bowl, mix the lime zest with the lime juice, soy sauce, chile, brown sugar, garlic and lemon zest. Stir 3 tablespoons of the dressing into the eggplant. Arrange the eggplant, avocado, carrot, cucumber, cherry tomatoes and red onion on a platter. Drizzle the remaining dressing over the vegetables. Sprinkle the chives, mint and cashews over the salad and serve.

My third season as a basketball coach just wrapped up. I was fortunate to have a really special group…