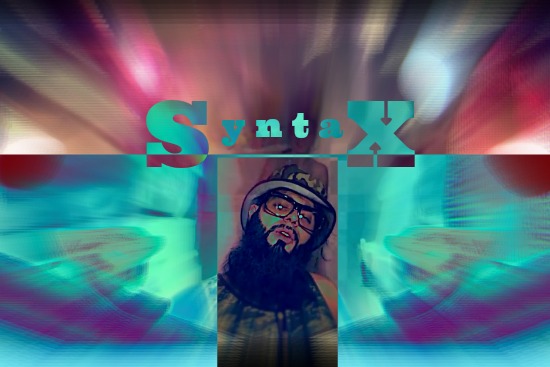 “Everything is energy and energy has a vibration. People, animals, plants, trees, dirt, crystals….it’s all just atoms and molecules moving around on a real small scale. The vibration is the frequency and the frequency is important.”

I get lost in words. People often mistake us for foodies because we like to talk about food. If you know us, though, you know we’re more beans and rice than fusilli and salmon tartare. It’s funny because no one ever accuses me of being a “wordy” when that’s probably a better descriptor for me. I love words and language; spoken, written, in and out of context. I scrawl new words down on whatever’s available whenever I discover one that captures my awareness. “Syntax” is such a great term. I’ve always been drawn to that one. There’s this dope Organized Konfusion track called Verbal Murder By Syntax that really made me fall in love with that word.

Well, I recently put a face to that name. You probably caught my recent interview with East Coast mic ripper, L.I.F.E.Long. He put me up on label mate and fellow microphone fiend, Syntax, on some, “Yo, you gotta talk to my man.” So I did.

Oh, you’re not familiar? Make his acquaintance by streaming (and then copping) his recent release. Dude’s got some nice raps, and he’s wordy enough, even for the likes of me.

We had a great conversation about food, energy and vibrations. Homeslice is vibrating on the same frequency as yours truly. I found we had quite a bit in common. We understand the same syntax, so to speak. Check it out… 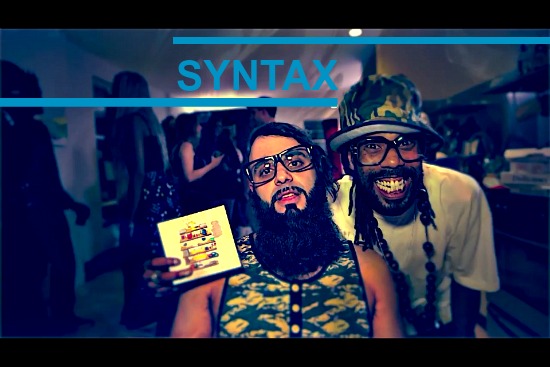 TKM: If you were writing your own Wikipedia page, what would you say about yourself?

S: Grew up in a small town in upstate NY. Loved hip hop from an early age. Got into punk later on. Recorded some jokey rap songs in high school. Went away to nerd school and got an engineering degree. Freestyled a lot there with my boy Dox, it was like a religion to us. Met DJ Afar and Man Danno in Syracuse and started a crew called Syntone. Put out a couple albums. Moved to Brooklyn for a job. Didn’t know anyone so started making a lot of beats. Met L.I.F.E. Long and Elohem Star and we started a label/collective called Cocoon Movements. Put out a solo record called “Dialog’a’rhythmic.” Currently working on 2 new solo records, the Elohem Star “LW2AC” album, the Cocoon Movements compilation and various side projects. The Cocoon Movements and Dub Ekoms presents “Stages of the Pupa Mixtape” mixed by DJ Afar is dropping very soon.

S: Food is the fuel and the cleaner the fuel the better the output. Beyond that there’s a communal aspect to it as well. The homie, Elohem Star, is always cooking up some serious treats for us while we’re writing and recording. Sometimes he cooks up this curry potatoes, Trinidadian bakes and pineapple chutney meal. No playing around and it’s great sustenance to keep the session going.

TKM: Damn, that sounds good! Gonna hafta have to talk to him next, it sounds like. Can you speak on your move toward a vegetarian diet?

S: Well, what sparked the whole thing was a video I saw around Thanksgiving time in 2001. It was one of those exposing slaughterhouse type videos and it totally disgusted me. I ate my Thanksgiving turkey that year and that was the last piece of meat or fish that I’ve eaten since. I just couldn’t get over the fact that the stuff I was eating was a part of this awful life cycle. I have no moral objection to consuming another living thing for survival but a pile of chickens that spent their life with little to no movement and suffered the fate of an electrocution conveyer belt death ride seems just about the farthest thing from a natural process as possible. A lot of the food production industry is on an ill dystopian tip. The land suffers, the small farmers suffer, the consumers suffer, so who is getting the benefit of this type of factory farming? I don’t want to put something with that energy in my body.

TKM: Yo, I can feel you on that. So, do you subscribe to the idea that what we consume carries with it certain energies and vibrations?

S: Everything is energy and energy has a vibration. People, animals, plants, trees, dirt, crystals….it’s all just atoms and molecules moving around on a real small scale. The vibration is the frequency and the frequency is important. Some frequencies are low, dense and dark and some are high and light. My explanation might change depending on who I’m talking to. To some it’s literal and others metaphorical but there’s no single correct interpretation. Some people are more sensitive to energy and vibrations than others. Meditation is one of the best ways to get in tune with it.

S: Extra virgin olive oil is basically coursing through my veins. I also use a whole bulb of garlic by default in just about any hot dish I’m cooking. I like greek yogurt, the one with all the fat in it. Butter is great for cooking and in my opinion not as bad as it would be made out to be. I eat a lot of eggs for protein, organic and cage free when it’s not a bodega egg sammie on the go. Any leafy greens in abundance, big salads with good cheeses (raw when possible). Also lots of beans like chickpeas, black beans, kidney beans. Quinoa or brown rice to go with stir fries. I try to stay away from any bleached grains so it’s all whole wheat pastas and breads. That bleached stuff is essentially just sugar once it’s broken down by the body. I try to avoid sugar/high fructose corn syrup, iodized salts, soy (though every now and then I go for some non-gmo tofu or tempeh), vegetable oils and pretty much any highly processed foods. When I’m feeling like a baller I cop the organic fruits/vegetables but it can get pricey and it’s not always possible.

TKM: Yeah, those organics put a huge dent in our wallets. So, you get around in the kitchen pretty good? How would you rate your skills?

S: I know my way around the kitchen. I’m not real flashy with it but I can drop some gems here and there. I usually make simple stuff, stir fries and veggie pastas. I make some bangin’ French bread pizza. Ma dukes passed down a marinara sauce recipe and I adapted it into a pizza sauce. I can rock some hummus and tabouleh but I struggle with falafel. If anyone has a good trick for keeping’em together get at me, I’ve tried to pull it off mad times and I always end up with a pan full of fried bits.

S: I’d make a meal for David Lynch. Would have to be something hearty. I think I’d have Doom cook me a meal, would be dope to watch his cooking process.

TKM: One of our missions is to educate people on food and food choices. What do you think are the biggest obstacles in the Standard American Diet?

TKM: Money, without a doubt. If that $3 whole cooked chicken they sell at Wal-Mart was local, organic and free-range, I’m pretty sure people would cop that instead but unfortunately that’s not the case and we need to buy what we can afford, especially those that have an entire family to feed. Processed foods are cheap and quick/easy to prepare so they win out a lot of the time. There’s also a lack of knowledge about what these things are doing nutritionally/energetically to us, and if this knowledge was more widespread we may see some better choices being made which could force a change in how all of this stuff works, economically. A paradigm shift? I read a great book awhile back called The Ethics of What We Eat: Why Our Food Choices Matter by Peter Singer and Jim Mason. It really goes into this stuff in detail and follows some typical consumers from the food they buy, why they buy it and then they trace it back to where it comes from.

TKM: Will keep an eye out for that. Thanks. Can you share a recipe with us?

Chop the garlic clove(s) into smaller pieces so they blend up better, then dump everything in a food processor or blender. Blend for awhile until it’s really smooth. Stop the food processor, take a spatula and scrape the edges and shit and work that back into the middle then blend a little bit longer. Sometimes the edges catch little chunks of garlic and chickpeas and this is no bueno.

Then spoon it out into a bowl, cover that shit in extra virgin olive oil and sprinkle some paprika on top. Voila!

S: True! Food is consumable energy and that energy becomes a part of you.

Like I said, he’s signed to L.I.F.E.Long’s label, Cocoon Movements. These guys are putting out some of that good good. Here’s one of my favorites from them.

Make sure you’re checking for these dudes. I expect great things from them, and you should too. Follow Syntax on Facebook and Twitter so that you’re up on the latest and don’t sleep on Dialog’a’Rhythmic. Sounds like there’s even more good stuff in the works. And as soon as I hear more, so will you.

I’ve spoke AT LENGTH about records and reading the credits. Pick up a record, flip to the back, scan…