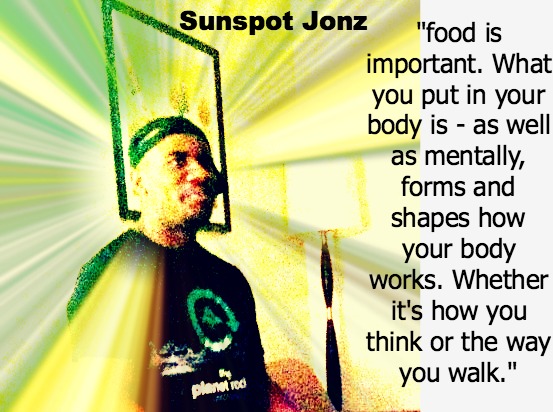 Sunspot Jonz. One of the hardest working artists in Hip Hop’s underground community. Independent since day one. While most trying-to-make-it artists were fishing for that elusive record deal, this dude was hopping planes overseas and creating for himself. One of the founding members of the, well legendary, Living Legends, this dude has left an indelible footprint in the sands of independent Hip Hop. Even if you aren’t feeling his music, you gotta respect his hustle.
This do-it-yourself mentality has paid off. His music has made it around the world. I remember seeing an interview where Davey D was saying that he was in an underground club (that was an army bunker at one time) in Beirut and they were playing Mystik Journeymen (Sunspot’s first group with his homie Luckyiam). That’s no accident.
I first heard dude on the Mystik Journeymen release 4001: The Stolen Legacy (at that point his name was BFAP). Check this track off that album…

Some bangers on this new album!

A while back I got the opportunity to sit down and talk food and music with this Almost Famous legend. The interview took place over three different sessions during a night that ended in a hotel room at 4 a.m. Here’s some of the conversation that took place with a Classic artist and Child of the Storm.

SUNSPOT: I’m a junk food addict and I’m a good food addict. And I think with my music it’s the same thing. I’m from Oakland, California where it’s a little bit of good – and it is a little bit of bad in the mix, but you know, people want the best for their families and the people that’s around them. We have a lot of taco trucks, (but) good fresh produce on the taco trucks. We have a lot of good restaurants – a lot of vegan and Ethiopian spots and we have the cheesesteak spot. I’m not gonna lie, I love this muhfukkin spot – but that’s a whole other story. Yeah, food is important. What you put in your body is – as well as mentally, forms and shapes how your body works. Whether it’s how you think or the way you walk.

TKM: Right. Well, you touched on the dichotomy between good food and junk food that apparently makes up the food culture of your hometown. Can you talk about any food addictions you might have?

SUNSPOT: Taco trucks, man. I’m in love with the taco trucks. Muhfukkas be like, “Corey, don’t do that.” And I be like – you know what? I’mma do that! Do you want one? And you know what? This is the realest part – 90% of the time they be be like, “Alright, get me a…” Haha. So, you know…I love that. I love cheeseburgers, I ain’t gonna lie. I love – I can’t even say it right, but it’s Mexican soup where you add cilantro and slices of chicken on that shit…k-n-o-r-r sopa –

TKM: You know what that shit is? It’s MSG. Straight up MSG.

SUNSPOT: I don’t care. It’s salty. Black people love that! We loooooove some salt. But, naw, seriously…salt, vinegar, I can go down the list, cheese – gotta be the orange cheese though cuz the orange cheese is the pop off.

TKM: Ha. Hey, a man does what a man does. Yo, you’ve been around the world a few times. Seen a lot. And probably eaten just as much. What’s the best city for food?

TKM: What if I said you had to pick a city?

SUNSPOT: There’s just so much good food. Do you wanna just eat the same meal everyday? Probably not.

TKM: Haha. Alright. Well, let’s do this…I’m just gonna hit you with some topics and you say whatever comes to mind first. Cool?

SUNSPOT: I love Valentina – I been killin that shit. Tapatio is always in the mix. Crystal, Red Rooster…ah, there’s so many. And then there’s that Asian one…Sriracha. And it’s got vinegar up in there. So many!

SUNSPOT: Tacos. I get some ground chicken and I make that shit up. Paprikas. Cilantros. Salsas. I don’t really put cheese in there. I don’t know why. I put cheese in a burrito. Another homemade – I know it’s disgusting but Ramen and ground beef. Add some garlic to that shit! That shit’s always gonna taste good, homie. Get dirty with it. So, that’s good…what else can I do. Sometimes I get some cream of chicken soup, mix that with a little ground chicken put that shit over some angle hair pasta…I’m gourmet! Gourmet. Add some garlic to that shit!

TKM: Garlic’s where it’s at?

SUNSPOT: Well, Jack in the Box. As you can see…[we had to make a fast food stop before heading to the hotel and Sunspot wasn’t satisfied with the quantity of his order]

SUNSPOT: Food that’s slimy. I don’t eat eel. Okra. My mom loves okra but it’s just like someone spit a loogie in the plant.

SUNSPOT: Man, my best shit, honestly is the chicken pita. Where you freeze the chicken and then halfway fry it and can still cut through it. Slice it hella thin and then put it in a wok. Lay it down all flat in the wok all around and then put some smoked, sweet paprika on that shit. Some chopped garlic. Maybe some serrano peppers. Some butter or some oil. Either way. Fry that shit. Cut up some cucumbers, arugula, some tomatoes, some lemon, cilantro, hummus…slap that shit up in that hoe. Salt and pepper. That’s one of the greatest meals I’ve had. And then some shoestring fries. Yes! You can actually put some shoestring french fries into a pita with lettuce and tomato…

TKM: Alright. Last question. True or false: you are what you eat.

Yo, don’t forget to go cop the Skywalkers album. You can download it on iTunes and grab three freebies off the album down below… 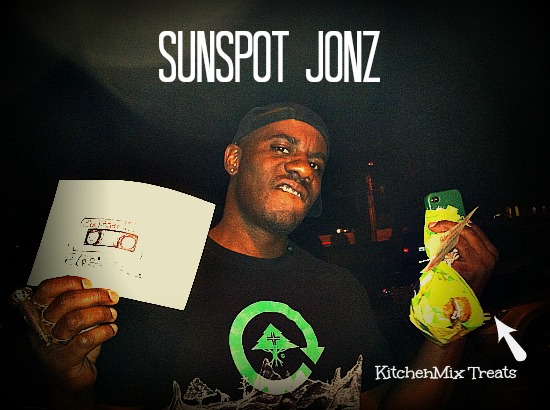 In 2010 when Homeboy Sandman dropped his 3rd album, which was my introduction to his music, I was excited…