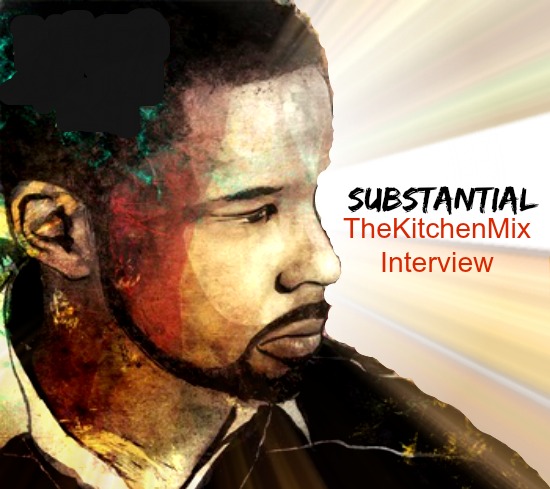 “The mark I leave will be more visible through those I inspire.”

In case you missed it, Sony recently announced that it has developed a new cassette tape that can hold 185 TB of material on it – yo, that’s like 47 million songs on a tape! Crazy. I have a lot of music in my house but everything I have wouldn’t even come close to even half way filling that thing up. I know there are people out there that could probably fill it up, though. But with that amount of music, how much of it would be quality? How much of it would have substance?

I prefer substance and quality over everything. My collection would still be measured by gigabytes as opposed to the terabytes that are soon to be the standard in data storage. Still, everything I have is substantial.

And Substantial is one of the artists whose body of work adds to the quality of my collection. Part of me hopes that you’re not familiar because in that case, you’re in for a treat. But if you are, you’ll agree that everything this man puts out – Whether it’s a solo project, as half of Bop Alloy, or lending his talents to his QN5 family – is 100% Grade A.

If you’ve been paying attention, you’ve noticed that I’ve featured several of his projects over the past few years and included one of his projects in my 2012 Top Picks. Home Is Where The Art Is still gets regular attention around here.

We caught up with the Baltimore resident, artist and top-notch MC recently. A little bit of food talk, a little bit of music talk and of course a recipe. Follow along…

S: A car needs fuel to drive. The body needs food & water to function. For me, I have to have something in my system before I begin the creative process. And another meal after it’s completed.

TKM: Where are you at right now in terms of food? What are you trying to gravitate toward or trying avoid?

S: I have a sweet tooth that I need to tame. Definitely want to avoid too much sugar. Although I eat a decent amount of veggies, I’d like to eat more (preferably raw) vegetables.

TKM: How has a career in music affected/influenced your diet?

S: It has made my palette fairly wide due to my frequent travel although, there are a lot of foods I don’t eat for health reasons. Outside of those mostly voluntary restrictions, I like to try a lot of the dishes popular in the various countries/cities I visit.

TKM: What are the biggest differences between food culture in other countries you’ve visited vs. the US?

S: Preparation and the portions.

TKM: What are the best cities for food? For music?

S: My favorites are Atlanta, Baltimore, NYC, Seattle, Tokyo, Washington,DC. Those places are also great for music and I’d add on Detroit, Istanbul, New Orleans, Paris & Philly. Honestly, there’s too many to list.

TKM: Do you get down in the kitchen? Is there a recipe that you could share with us?

S: Yes, I do. The one I’m most known for is my Southern Candied Yam with a Haitian twist. It’s not a very healthy dish so I only make it for special occasions.

6 large sweet potatoes, 1/2 cup of butter, 2 cups of white or brown sugar, 1 teaspoon of ground cinnamon, 1 teaspoon of nutmeg, 1 tablespoon of Haitian Rum (my wife’s Haitian so I tapped in to her stash and I thought the rum would make for a more unique/tasty ingredient than vanilla extract) and a pinch of sea salt.

S: If my father were still alive, I’d like to cook for him. He was a chef in New York for awhile and I’d like to see if he’d approve of his boy cooking.

Nothing beats Grandma. If she was still around, I’d kill for one of those meals. I looked forward to those weekend trips to B’more from P.G. County because I knew we were going to be blessed with a plate.

TKM: What accomplishments are you most proud of?

S: Being an awesome father to my daughter.

TKM: What’s next for you? Any projects for us to look forward to?

S: Still touring the US with Marcus D as Bop Alloy. Next stop, San Antonio in August. We have a Holiday project called ‘Winter Breaks’ in the works that’ll be out by late November. Working on a collab with my dudes The Other Guys. Also working on a new Extended Famm album with Tonedeff & PackFM.

S: I will be remembered for being a great father, a loving/supportive husband, a dope MC, visual artist and a dedicated youth worker/educator. The mark I leave will be more visible through those I inspire. It’s bigger than me and I’m more than alright with that.

You could come out with all the new technology you want, all the upgrades, increased storage space, whatever. But if the content that you’re uploading into that technology isn’t quality and substance, you’re just filling up space. Since his first release, Substantial has been giving us the good, wholesome, quality projects. He’s worked with some of the best, from Nujabes and Cyne to Oddisee and DJ Kool Herc. There’s enough of a sampling throughout our interview to get you off on the right foot. For more you can follow him on Facebook, Twitter, or his blog. You’re gonna want to add his catalogue to your collection…it’s substantial.