“…to have the God Degree ready
Veggie stir fried, with the cabbage inside” -Masta Killa

Shifting temperatures are upon us and, with that, many folks become more susceptible to illness. Everywhere I turn people are sniffling, sneezing and coughing. Those sounds are my cue to rev up my immune system.

This recipe includes 4 of the most powerful ass-kicking foods on the planet: kale, onions, fresh ginger and red cabbage. While many people are familiar with kale’s nutritional content (it even has it’s own holiday), I think it’s time to bring cabbage into the limelight. Both kale and cabbage are cruciferous vegetables, along with broccoli, bok choy and brussels sprouts, which are acknowledged as having major anti-cancer properties. Red cabbage is preferred over green cabbage as “the rich red color of red cabbage reflects its concentration of anthocyanin polyphenols, which contribute to red cabbage containing significantly more protective phytonutrients than green cabbage (source).” That’s what I’m talking about.

Plus, purple and green are two of my favorite colors! 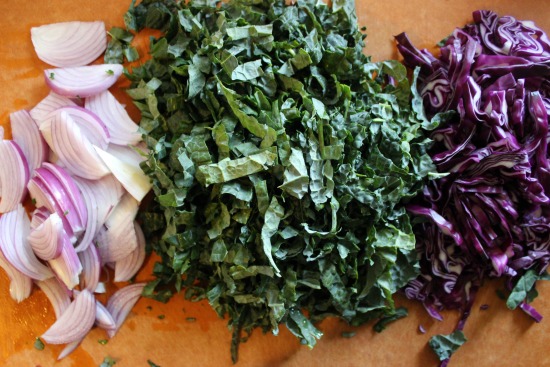 Boosting your immune system is the first and BEST line of defense against any invaders. It’s also something that should be done regularly, not just during flu season… We wanna live as long as possible right? 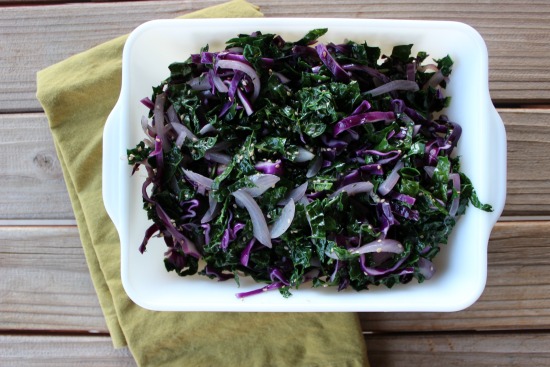 Eat this straight up, as we did, or spooned over brown rice or quinoa.

adapted from Wild About Greens by Nava Atlas

Cut the kale stems out of the leaves. (Save the stems in a bag in the freezer for a future vegetable stock.) Slice the leaves into thin strips.

Heat the oil in a medium pan and sauté the onions until they are soft. Add the ginger, kale, and red cabbage and stir until the kale turns bright green. Take it off the heat.

Add the sesame oil, salt and pepper, and toss to coat.

You know, as soon as you play somebody a song and put the beat on, their head starts nodding….