It’s amazing how much the music industry has changed since the internet takeover. Acquiring music is such a different hobby now as compared to 20 years ago. I used to have to take chances on albums I’d see at my favorite music stores. Free albums were extremely rare (unless it was dubbed tape trades with homies). Now though, artists have been forced to change up their paths to success. You gotta build an internet fan base nowadays. There’s gotta be a video, a Soundcloud, social media is a must and free mix tapes and albums are almost essential. Today, I’m gonna share a free album with you that I hope you’ll download and enjoy. But check it out, here’s the interesting part, neither of the artists featured on this project needed this release to drop to help their careers. Both have given us free projects in the past but not necessarily to build hype around themselves…more as a here, enjoy this gift from me to you.
Well, Raashan Ahmad and Ta-ku definitely blessed us with a nice little gift here.

Here’s the story behind the release from their Bandcamp page:

Raashan Ahmad was on a euro tour some weeks ago and during his stop in Berlin we were talking music over dinner. I told Raashan that we are about to release an album with Ta-ku (which has happened in the meantime, check out the “DOWHATYOULOVE” album) and he asked me whether I knew that he recorded a full album with him some time ago during his last australian tour. No, I didn’t know that and getting my hand on the album turned out to be not too easy as it couldn’t be located for quite a while. In the end Raashan found it on an old hard drive and I was a fan of the album instantly. It’s raw hip hop in the truest sense. None of the songs are longer then 3 minutes, quite some are around the 2 minute mark. Nothing but dope beats and raps with some unreleased Ta-ku instrumentals sprinkled in between.

So obviously, this is an older release. However, lucky for us, Jakarta Records decided to put it out for our listening pleasure (I’m sorry, did I mention for free?!?). It’s also available on limited press vinyl. I would love to cop it on wax but those international shipping rates are insane (Jakarta Records is stationed out of Germany). I already dropped coin on a Jakarta vinyl release earlier this year. Raashan Ahmad’s last official release, Ceremony, (one of my top 5 albums of 2013 so far) was put out on the same label.

If you’re not familiar with Raashan Ahmad’s discography, you need to get familiar (Google is your friend). I first heard him on a Crown City Rockers‘ project called Mission that came out around the turn of the millennium. You gotta get your hands on this album, it’s dope!
Here’s one of the fresh tracks off of that project (Raashan Ahmad trades verses with Moe Pope on this one)…

Ta-Ku is the producer on the free Low Fidelity, High Quality project that I’m featuring today. He’s amazing behind the boards but my introduction to his work didn’t come until last year when he released his 50 Days for Dilla project. There’s also a Vol. 2 if you’re feeling that one. It’s nice! This dude’s star is rising quick. He’s recently incorporated more of a dancefloor style to his repertoire but his styles vary greatly. You should peep out his Soundcloud page for a sample of what he’s worth. If you’re looking for something mellow but hella dope, check this tribute to Nujabes out…

Well, now that you’re familiar with the two artists on this project the only thing left for you to do is press play to check it out and then click download to get that up on your iPod. Also, you might wanna go back and check the back catalogue of both of these artists. They don’t disappoint. Nope. 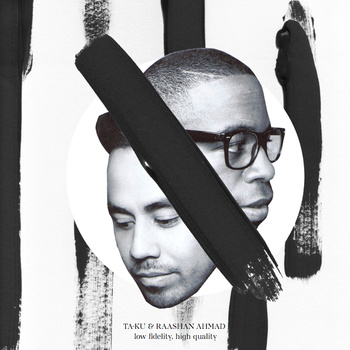