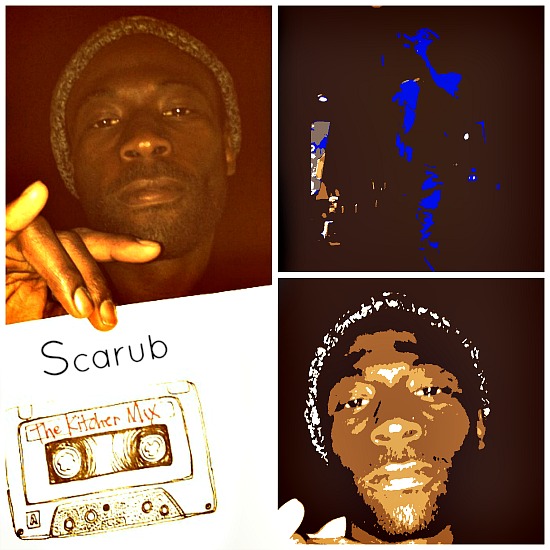 One of my favorite things about the Living Legends crew was the fact they each brought something different to the table. Collectively, they covered all angles in the vast span of skills most emcees aspire to attain. You had wit, wisdom, vision, street savvy, laidback, soul, funk, poetic prowess, intricate wordplay, speed rapping and a few dozen others all rolled into one super group. Unfortunately for us fans, the group has since split and left us with mostly solo efforts (save for the G&E projects and one Mystik Journeyman album). But, not gonna get all teary eyed because they did leave us with an amazing catalogue of music and each member is still supplying us with the goodness.

For his part, I’d say that Scarub is the most poetic of group. He’s the thinking man’s emcee. A true poet on m-i-c. And I don’t say that too often…if ever. Let’s just say that lyrics matter to this dude. For most MC’s, rhyming matters most, but for him I think it’s the message and the lyrics.

Whoever knew it cost so much to clutch a dream
In between the thumb and the index lies a small space for mistakes
The indication for almost
Sometimes you hold it until you face to magnify how
Close you came in life to something
That you measure up to
I know that pain like my enemy
Slap my ass when I’m born, and will hold my hand when it’s the end of me
The lessons learned in between these two extremes feed me energy

I love that break down of the universal symbol for “almost.” He’s a master.

Last night I took a field trip
Kind of bent, hopped a fence
Cut across a playground and lake, down by the cemetary
Reflcecting on my past, present, and current events
Speech slurring venting to the moon wishing she would answer me
Not literal, but in the spiritual sense
We spoke me, myself, and I, but I wasn’t alone
In fact it felt that picture of a beach with footprints and the sand
You know the poem hanging in grandmama’s home
Where does love come from
Where does it go when its gone
What takes its place
And why does that space turn hard as stone
Another year I am older today
In many ways I’ve grown
But in my head them, them questions still they roam
Riding the bike she said its like cycling in circles
With your eyes closed
No hands blind fath is what she called it man

I could probably spend the better part of a day breaking down his style and lyrics but I think now’s a good time to share with you a conversation we had with the homie about food and such. Check it out…

TKM: Scarub, I know that food plays an important part in your life but can you break down how food relates to the creation of your music?

SCARUB: Food is energy. It starts at the food from the very jump. It affects how you think, feel and how you write your lyrics, make your beats. Food is the very beginning – the essence. It’s the energy you’re running on to make whatever music or whatever you’re going to do with your day in your life.

TKM: Do you get down in the kitchen?

SCARUB: I do. I have no choice. I don’t have anyone to cook for me so I have to get down in the kitchen. And I like food so I gotta make it good.

TKM: You got a quick recipe to share with the people?

SCARUB: Yeah. Grilled salmon. Throw in some ginger, cinnamon, garlic, onion powder, grapefruit juice – soak it in there first. And then while it’s on the grill you squeeze some lime over it constantly so it doesn’t dry out. Oh, a little bit of honey. And then when it comes out – voila!

TKM: Can you share some food items that are essential and some that you’re trying to stay away from?

SCARUB: Food items that are essential: red grapefruit, ginger, mint, mint tea. Foods I’m trying to stay away from: candy, junk food – that’s tough, potatoes, sugar – even agave, I mess with the maple syrups. I stay way from dairy, don’t mess with dairy, it’s almond milk. I stay away from soy, I don’t mess with soy.

SCARUB: It’s tough. Sometimes you gotta choose the lesser of the evils. For instance, today I went to the grocery store and stocked up on the foods that I eat. It’s tough but if you go above and beyond – if you’re determined you can find…you gotta find like-minded people. When you’re traveling you gotta think ahead. You gotta look ahead – ok, I’m gonna be in this city. What stores are in this city? Who do I know in this city who can find these certain items that will last me x amount of time til I make it to the next city so I don’t have to indulge in fast food or a lot of the other stuff that’s just plaguing our society.

TKM: So what are the best cities for food, if you had to choose?

SCARUB: It varies. L.A. is great. We have the good, bad and the ugly. The Bay Area is awesome. You know, your Oakland, your Frisco. We also have Austin, TX. It’s dope, it’s the Mecca. It’s where Whole Foods started. Seattle’s pretty fresh in the sense of sea food. And Portland, too. Once you start traveling east it’s a bit tough until you reach the East Coast. The Midwest is really difficult. It’s a different mind state. It’s a different way of life and different way people were brought up. You got crops galore but it’s the way in which the crops were grown that’s the problem. It’s tough. But I find that if you’re on the coasts, West Coast or East Coast, you’re usually in good shape. You can find stuff and like minded people who eat similar.

TKM: Something about the water?

SCARUB: Something about the water.

TKM: So, you talked about – you used the word plague…

SCARUB: It really comes down to taking short cuts. We’re so used to, as a society, taking shortcuts. “I’ll just grow this crop that sprouts/grows in three months instead of six months. Bigger, faster, stronger in a shorter amount of time.” But, it has its consequences. Within food, within building, health…”I’m just gonna take this drug and it’s just gonna numb my body and I won’t feel the pain and later, next week, next year I’ll do something about it.” But we never do because we forget. It’s a sickness in itself. I think we as a society, we’re very good at lying to ourselves and in believing our lies. And lo and behold the molehill becomes a mountain. We’re in a whole lot of problems. And I also believe that problems we face today can’t be solved with the same solutions that we had yesterday. We need new solutions – and I know that’s vague but it all starts with food. It all starts with drinking water. It all starts with putting down the fruit beverages and picking up the fruit juices. Drinking less of the fruit juice, picking up water and thinking clear.

TKM: So, you’re obviously very conscious about what you consume, have you always been that way? Is it a more recent thing?

TKM: Oh, nice. Well, I’m just curious about this – was there ever a moment or stage in your life when –

SCARUB: Oh yeah! Yeah! I still wild out. I leave my house and hit the road and my weakness is Reece’s Peanut Butter Cups. I’m like, “This is amazing! How do they make this? It tastes so good. It’s peanut butter, it’s chocolate, it’s sweet, it’s great!” But in my house you won’t find it. Nowadays, I’m two kids deep, my kids keep me grounded. It’s like a devil and angle on both shoulders. I can’t eat this and feed my kids this. So I have to stay healthy. But when I leave my house is when I get to indulge in a little bit of this and a little bit of that. But it’s tough, man. You know, you eat healthy, whatever. Then you go deeper. Then it’s like ok, what’s your blood type…you can’t eat this, you’re not supposed to eat that. Oh shit, I’m not supposed to eat coconuts but damn, coconut water is dope! You gotta find a medium. You gotta find what makes you happy.

TKM: Are you familiar with Ayurvedic eating?

SCARUB: I’m learning, I’m learning. It’s just tough because you think you’ve found a good place and then you learn more and it opens up a new chapter…right now, I think I’m in a good place. I’m in a place where I can cook and my children are enjoying the food that we eat and there’s less side effects than there was two years ago. In order to stay healthy we don’t have to do as much. I think we as a people we’ve gotten accustomed to consumption: physically, mentally and even spiritually. We have to realize that we don’t need as much as we thought we did. Our nation has the idea of bigger is better. We started with the SUV’s but now we’re in trouble with oil so now everybody’s trying to jump out of the SUV’s into the Hybrid’s. But when we had the electric car, we let that go. We, the people, let that go by allowing General Motors and all these companies to kill them off. So now we’re in a bigger problem…you know, it’s tough. We need a new solution. It all starts with food.

***********
Since this conversation, we’ve shared several meals with Scarub. We had the pleasure of partaking in his famous grilled Yellowfin Tuna. And we surprised him after a dinner together with a homemade version of his favorite dessert – peanut butter cups (kitchenmix style – be on the lookout for that recipe). During each meal we continued the dialogue begun with our initial meeting and interview – food, health, kids, society and a solution to the problems that plague each of those topics. And, without even realizing it, I think that somehow we were of the same consensus…
It all starts with food.

Make sure to follow Scarub on Facebook so you can keep up with all that he’s got going on. I can tell you that he’s working on a new project. So, be on the lookout for that. Also, make sure to check out his back catalogue and grab any of the albums you may be missing for your collection. We’ve gott’em all. And if you don’t know where to begin, I’d start with Heavenbound.

I’ll leave you with this…

and, of course, his classic…

When I was little my grandmother – my Abuelita, lived with us. She always kept a fresh patch of…