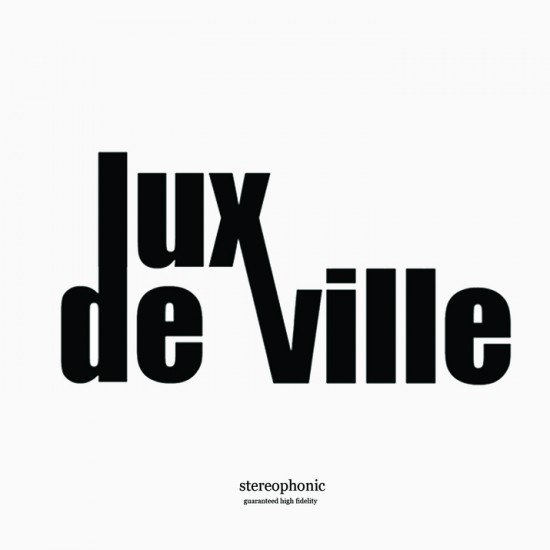 I first heard 8thW1 on his collaborative project with 2 Hungry Bros. After that he popped up like a point of interest on Hip Hop’s highway. Had me listening with joints like “Short and Sweet.” Since then he’s been on my radar and guess who just reappeared with a new project. Check out some of his previous project right here…

I can’t say that I had heard of PVD prior to steaming this new album (that I’m about to review) which is kind of surprising. I’ll tell you this though, from here on out, I’m going to be on the lookout for upcoming projects that he’s involved in. His production on each of the following tracks is top notch.

These are my thoughts on the new project, lux de ville:

Right out the gates 8th hits us with something kinda special. It may be labeled “Intro” but this is not your typical skit, or fresh beat laced with idle chatter, nor is it a this-is-me type of intro. Nope. It’s just a great introduction to what you should prepare your ears for. “Good music made for you to just chill” Yep, that’s what it is.

“Take It Light” is 2013’s “you gots to chill.” Bars, son. Bars. Wifey said that this one reminded her of some old Black Eyed Peas (you know, when they were good) and I can see that.

“Happy”…if this song doesn’t have you feeling like the title says…then keep your ears focused on the lyrics and at least try to catch one of the lessons he’s putting out there. He’s not trying to let all the wack aspects of life pull him down. He’s happy. And so am I. One of my favorites from the album (even had this track posted to our FB page months back).

“Home Sweet Home” is on some look, I know shit sucks here and we can complain all we want but this is where we live…this is home. Starts off with a few rhetorical questions aimed at that idiot that gunned down Trayvon Martin. More positivity here.

“The people that show love no matter the shade and it don’t matter to me it’s all black anyway/ hatred is everywhere how you gonna escape so I keep doing me it just be’s that way/ We livin in a sick, sad world you know/ but that ain’t nothing new cuz you heard it before/ pray that you never get a knock on your door/ we all hope for better but where you gonna go? Cuz this is home sweet home.”

“Get It Together” is 8thW1 gettin’ down for his. It’s a this-is-who-I-am-and-what-I’m-about track. And it goes. If you want an introduction to 8thW1, this is it.

“Smoke Break” is on some Jazzmatazz ish. Both Guru and Donald Byrd would be proud of this little number.

“YDHM” which apparently stands for you don’t hear me is more electronic than anything else he’s laid out before us. He’s speaking on societies ills and the things we do to oppress ourselves. But you don’t hear me, though. For some reason this one kinda reminds me of something Co$$ would be featured on.

“It’s Mine”…yo, if we get to pick a track to call our own…this one right here, it’s mine. Makes me wanna strut. Jazz, Funk and Hip Hop just made a baby with this one.

“The Note” is an attempt to offer last words before crossing over to the other side. Though, I’m not really sure from whose perspective. Some interesting thoughts in this one. It’s the shortest track on the project but no lack of thought or insight.

“God Help Us” is 8th asking for help to make it through this journey of life. He gets introspective and breaks down what aspects in life he needs help with, some of the same stuff as most of us.

“Thank You For Coming” is probably the most laid back cut on the album. I mean, the title says it all. But you gotta love lines like, “When I get home there won’t be no lights/ I’m trynna hit the hay like Crucial Conflict.” Chicago heads know what that’s all about. There’s a hidden cut at the end that’s equally as good as any other track on the project. There’s no title for this track but it’s probably called “Pass It Off.” It’s real cool. With the keys it kinda has a Crown City Rockers vibe to it. Great way to end the album.

Honesty, this is one of the best albums that I’ve heard this year. Top two for me right now. Here’s my breakdown:

Beats/production – A+
Lyrics – A
Content – A
Creativity – A-
Originality – A

Stream the album and listen for yourself…