I was doing the record digging thing the other day and, among other things, came up on a $1 piece of Hip Hop history. 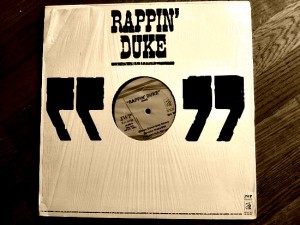 If you don’t know about this, lemme preface by saying it’s a novelty rap track. Listen to it and have a good laugh. Although, as silly as it is, it’s actually a great piece of 80’s pop culture reference. The whole song is based on the concept that John Wayne, Ronald Reagan without the presidency, is taking out sucka MC’s. It’s bad. And not bad meaning good, but bad meaning bad. But it is a piece of Hip Hop history and like KRS-ONE says, “You. Must. Learn.”

The hook (Duh-ha, Duh-ha), which stays in my head all damn day every time I hear it, might sound familiar. Especially if you like to sing along to this…

Did you catch the reference?

Anyway, it’s good to know where things come from. I’m sure many of you know all of the lyrics to that song but many probably weren’t aware of the reference. So (in my best Paul Harvey voice) now you know the rest of the story.

Finding this record also reminded me of some super dope typography and lettering styles by Jay Roeder. Peep his site. He’s got this ill B.I.G. “Juicy” Series that’s not to be missed. The whole site is full of dope stuff and worth a look.
. 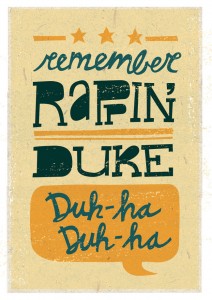