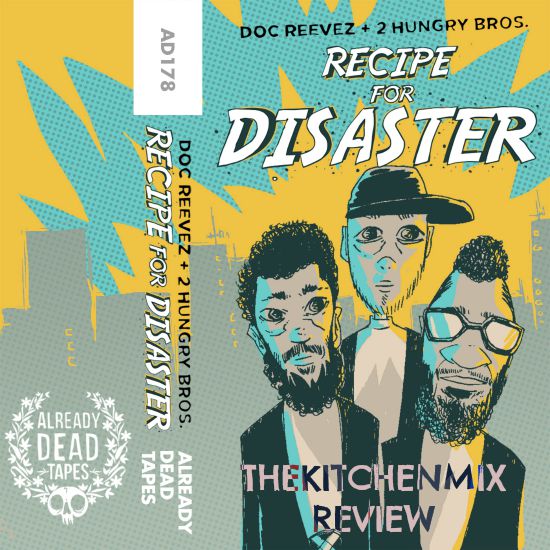 Do you ever watch Chef Gordon Ramsay? He had this show – I don’t know if it’s still on or not – where he’d go in and help folks whose restaurants were about to go under. Nine out of ten times there’s some tormented asshole who’s so fixed in their ways that they can’t even see that they’re the ones sabotaging their own business. If they’d only snap out of their egotistical this-has-always-worked ways, they might not be there, making fools of themselves on national television. Art is about growth – all art, culinary, musical and everything else. You stop growing, your art starts dying.

2 Hungry Bros., who may or may not be my favorite production duo in the sphere of Hip Hop, aren’t the type to let their work get stagnated. These cats are always working with new flavors (beats), spices (samples), and main dishes (MC’s) and never stick to one recipe. If you go to DJ Premier (who is thee greatest at what he does), you know what you’re getting. You don’t know exactly what you’re getting but you have a pretty damn good idea of what he’s got cooking in his lab. Not these dudes. If they’re producing for Homeboy Sandman they’re not putting the same dish together that they served up for 8thW1 or K.Gaines or even I Am Many. Nope. It’s gonna be something that fits the occasion. Read: fits the MC they choose to showcase over their beats.

They’ve found their recipe for success and it doesn’t involve referring back to the same ingredients or measurements. This go around, with Recipe For Disaster, they team up with MC/producer/DJ/engineer, Doc Reevez of Phoenix Renaissance whom you may have read about HERE. This isn’t that fun, light, happy feel good stuff that they’ve done in the past, on projects like No Room For Dessert. Although, that stuff was great.

Recipe for Disaster is some boom bapness for the old school Wu lover in you. I’m saying, some of the production on here (“Market Venom” “No Resemblence” and “Problematic”) has me looking for some baggy surplus camo pants and grabbing for my old Sunz of Man and Killer Bees tapes. This album is a lot more gritty and raw than I was expecting. That’s not a bad thing. Baby, I like it raw. I also appreciate that few out there will be able to place the samples on this project. Everything is chopped and looped in a way that gives it just enough of what they’re trying to give you without letting you get too comfortable with a melody to hum along to (though, “Live Your Life” does have a nice hook and catchy cadence). You’re forced to focus on the lyrics as much as the smaller parts of the production puzzle. This is hard to do. There’s a fine line between production that outshines the lyrical aspect and production that’s too convoluted.

There aren’t too many features on this project. DJ Devastate does his thing on “Stimuli” which really adds to that grimy 90’s feel I was mentioning earlier. MC-wise, we do get blessed with verses from Reef tha Lost Cauze and K. Gaines on “Frun Gru” (which is another Wu-family feeling production). Rugged, dope. One of the album’s highlights. It’s not surprising that this was chosen as the first single from Recipe for Disaster.

For his part, Doc does a great job of navigating this vessel. I’m gonna say this, just to get it off my chest – and it’s not a knock – but dude’s voice and even flow at times remind me of Sick Jacken of Psycho Realm. But he is his own person. In fact, I doubt he’s ever heard that comparison before, I’m just wired like that when listening to MC’s. This isn’t any Action Bronson/Ghostface debacle, I just hear what I hear. He’s got flow and knows when to switch it up to ride the beat and when to make the beat follow his lead. That’s not something that all MCs are able to do. Looking at you Talib.

“Dusty Journey” and “Charred Beef” are both great examples of what he can do from a descriptive storyteller’s point of view. A lot of it is braggadocio but the style that they’re coming with here really calls for that, so no complaints. You’ll see what I mean with “Soul Collector.” I’m not sure what else he’d rap about over that beat. Though he is dropping little gems as he meanders through the song. He gets the most creative with his voice on “Kings Landing” where he handles a sing-songy hook in between some in-your-face bars. That’s another one of my favorites.

I could make a 2 Hungry Bros mixtape, play it at my next gathering and everyone would be enjoying it from top to bottom but the minute a track off this album comes on I can almost guarantee that someone would ask, “Yo, who’s that?” This is such a departure from what we’ve come to expect from these dudes that you might be a bit surprised (pleasantly).

Lyrics – B+
Beats – A
Features – A+
Playbackability – A-
Originality – A
Overall Freshness – A-
Good to play while cooking? – Yes, if you’re cooking for yourself. And it’s better on headphones.

The album drops on August 4th. And fellow tape heads, you’ll be happy to hear that it will be released on cassette (big up Already Dead Tapes). But for my audiophiles and general music lovers, you will also be able to cop this digitally then as well. Look for it on the Already Dead Tapes website and Bandcamp for both the tape and digital download. Of course, it will also be available on iTunes, Amazon, Spotify, and everywhere else. Go grab that!

“We cannot change unless we survive but we will not survive unless we change.” I don’t know who said…