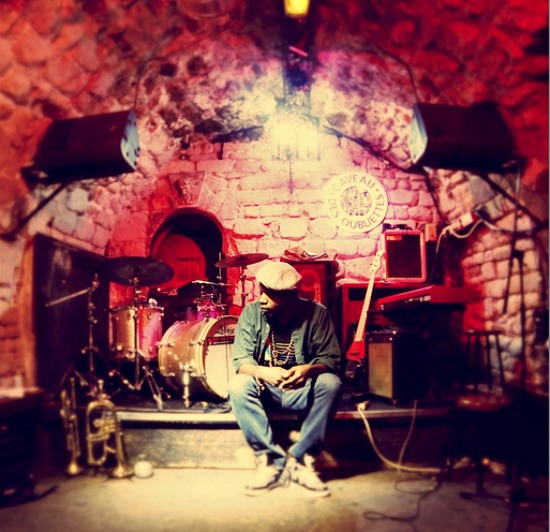 There are quite a few artists that I follow and try to support. If there’s something/someone that I like, it’s guaranteed that I’m going to do what I can to lend a hand in whatever capacity I’m able to at the time. Whether it’s a share, retweet, purchase, word of mouth recommendation, inclusion on a mixtape, or just a casual mention, I do what I can to help those artists in any way that I can. Sometimes, it’s hard to support everyone, though. A lot of times support involves funding or other financial type of help. Like I said, I do what I can but it isn’t always feasible. So, I’m always grateful for those moments when artists offer free projects and my level of support just involves resharing those freebies. Well, today I’m going one step further and doing my best to encourage you to download this $0.00 release – through a track-by-track break down.
Generally, artists like to save the best of what they’ve created for their solo exhibit or albums or personal portfolios. Raashan Ahmad, who I may have mentioned once or twice or several times on this site before, has compiled a collection of 13 tracks that he has collaborated on. You may know him from his work with Crown City Rockers but today you’re gonna get a feel for what he can do when he collaborates with other equally talented groups or individuals. Check it out…

This is one of my favorite tracks off of Gif of Gab’s most recent release, “The Next Logical Progression.” And to have both Zumbi (of Zion I) and Raashan plugging in some soulful verses all on one track…those are the makings of a masterpiece. Everyone that had a hand in this track tapped into their inner greatness to create something that evokes some spiritual goodness. Replay value is off the NASDAQ graphs!
____________
2. Zo aka La chauve​-​souris – Burnin’ (feat. Raashan Ahmad & Phat Kat)

This one is new to be but that Blues piano got me from the jump. “It’s that Mississippi Hip!” Let’s refer to this cut as a Blues/Funk/Gospel/Hip Hop gumbo. And yes, you will come back for second helpings. Seasoned with a little Phat Kat verse for those that enjoy some heat in what they’re being served. Enjoy!
____________
3. DJ Tonk – Dig it (feat. Raashan Ahmad & Ohmega Watts)

I’ve been hearing stuff featuring DJ Tonk for a minute now. This joint could easily have been on one of the Jazzmatazz volumes. Hella laid back vibes and cool-out jazziness. Solid. I actually can’t get enough of this. 9 times out of ten my M.O. is exactly the feel that this track exudes. Gimme a whole album of this type stuff and I’m a happy man.
____________
4. Destani Wolf – Uprising (Headnodic rmx. feat. Raashan Ahmad)

This I recognize – well, the production, anyway. This might sound familiar to you if you were a fan of Organized Konfusion (Pharoahe Monch and Prince Po). On their second album they had a song called “Let’s Organize” and that’s why this sounds so familiar. Everything else about this is fresh and original, though. Positive, uplifting work from Destani Wolf and Raashan. Shout out to Headnodic on the remix.
____________
5. Jukebox Champions – What You Do (feat. Raashan Ahmad & Afrika Baby Bam)

Jukebox Champions are new for me. But I’m definitely feeling what they’re doing here. They just made a new fan out of yours truly. I always tell people, the best music comes out of collaborations between people from different places, spaces and cultures. And this is exactly What You Do when the E.U. and U.S.A. come together on some musical creativity.
____________
6. Pugs Atomz – Small World (feat. Raashan Ahmad, Karen Be & Ariano) prod. C1gart

I’ve been a fan of Pugslee since his days with Nacrobats and The Blackbook Sessions on Galapagos 4. Raashan and Karen Be hopped on this track with Swiss producer C1gart and a jazz/funk/downtempo baby was born. As a bonus, TKM favorite, Ariano jumped on board to help out with the hook. This is the musical haze that accompanies all nickel bags of funk.
____________
7. True Vibenation – No More (feat. Raashan Ahmad & Chris Gudu)

True Vibenation are an Australian trio of musicians that just upped their stock by adding Raashan Ahmad and Chris Gudu onto an already potent track. Some more of that meeting of cultures for this World Music poster child. They call this track “No More” but all I want is more. These guys will be on my radar from this point on.
____________
8. Sarsha Simone – Oh Boy (produced by Muneshine feat. Raashan Ahmad)

The first time I heard Sarsha Simone was on Raashan Ahmad’s Ceremonies (a VERY dope project, if you’re not already hip). I have a feeling we’ll be hearing more from her in the very near future. She sounds like she’s ready to take up the torch passed on from Amy Winehouse and a young Macy Gray. You just stepped into a soul lounge with this one.
____________
9. Seneca – Raspeckanize (feat. Raashan Ahmad & Micah 9)

This is all Myka 9 – he’s not the only one on this cut but the feel and style is all him. I just get the feeling that he went in and dropped what he’s known for and everyone else involved just tried to compliment him. That’s not a knock or even close to a bad thing. Everything from the beat to the additional verses fit like clock gears. I like it. Good Life music. It’s fun to hear Raashan with a different flow. He’s just stylin’ on us, reminding us what else he has in his arsenal.
____________
10. Night Marks Electric Trio – Glorious Tune (feat. Raashan Ahmad)

Another group I was previously unaware of, Night Marks Electric Trio, is apparently a Poland-based collective. Yeah, I’m feelin’ the Euro Lounge vibe from this track. I definitely wouldn’t mind witnessing a live version of this one in a lights-dimmed lounge-type environment. I’ll be keeping my ears open for other projects from this group.
____________
11. The Mighty Underdogs – Bring Me Back (feat. Raashan Ahmad)

Bring Me Back was a bonus track from The Mighty Underdogs‘ album Droppin Science Fiction. This one is a bit of a Crown City Rockers reunion. Several of the key players from that group have come together to a create a track that, as far as I’m concerned, should not have been left off of said album. It’s more of a Crown City Rockers project featuring Gift of Gab and Lateef than a Mighty Underdogs project featuring Raashan Ahmad, if you ask me. I’ve already put this one onto a few different mixtapes. When you’re finished enjoying this collection here, go back and pick up DSF if you haven’t already.
____________
12. The Polish Ambassador – Rise and Release (feat. Raashan Ahmad)

Oh, man is this a good one! I couldn’t tell you much about The Polish Ambassador but I could ride that rhythm to the end of time. But that’s just the foundation – the drums, verses and flute (sample?) are like those intangible ingredients in your favorite dish. MAYBE my favorite song from this collection. Makes me feel like spittin a verse and I’m not even an MC.
____________
13. Raashan Ahmad – Who’s God (feat. The Grouch)

I’ve already been on this one for a bit. Raashan shared this on Twitter and Soundcloud awhile back. It’s actually an updated version, with an added Grouch verse. The original can be found on his last LP. Always one to come up with thought provoking subject matter, Raashan goes into a bit of a discussion on who/what God is. The Grouch gets a bit more personal with his verse but it’s equally introspective and contemplative.
____________

What a great thing for Raashan Ahmad to gift us. A project packed full of soul and musical creativity. Many artists strive to come up with a vibe like what’s happening here, only to come out with one or two tracks that reach that level. Without even trying – it is just a collaboration collection, afterall – he was still able to create something that’s better than a lot of LP’s that are currently sitting on music store shelves. For more good vibrations from Raashan Ahmad, head over to his Bandcamp page or follow him on Twitter or Soundcloud or whatever other social media you enjoy – he’s everywhere. Enjoy it. The best things in life are free!

P.S. – Let me just leave you with this amazing track that he recently shared…I’m telling you, there’s a reason this guys is one of my favorites…

I never eat jalapenos… unless they’re pickled. These bread and butter jalapeno pickles are supa hot!  Eric couldn’t get…