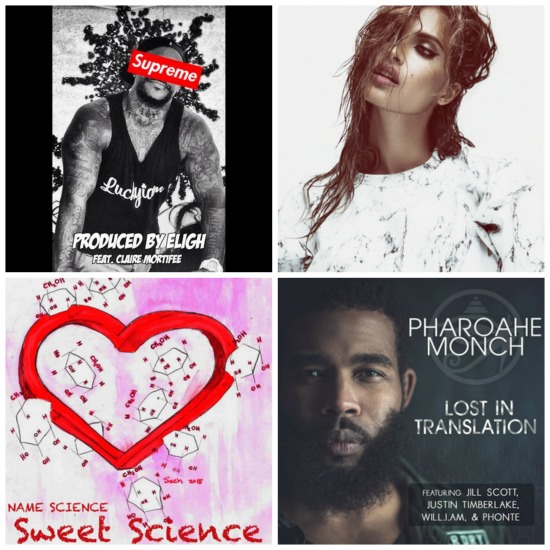 To be clear, I am not a fan of the clichéd chocolate heart shaped day called Valentines. Y’all can have that one. I’m not completely curmudgeonly about the day though – I always come through with something nice for my wife. I just don’t get down with the upmarked flowers and Hallmark nonsense. Usually it’s something I’ve created with my hands, something unique. Even though I do avoid the milk chocolatey sappiness that only a teeny bopper or flower shopper could get down with, I do keep my ears open to music of the season.

Last week, leading up to February 14th, there were several musical releases that I made sure to check out. And because the season for love shouldn’t only be condensed into one day, neither should the music. So, even though the day has passed and the remaining gifts on the shelves have been reduced to their normal overpriced sticker values, the music can last for the rest of the year. What I’ve done is compile a few of the songs and projects that were made to be enjoyed for Valentine’s and every other day. Maybe you’ll find something to enjoy with your significant other for the remaining 364 days of the year.

Don’t even bother streaming, just get this! Sure, it’s a collection of previously recorded material but c’mon it’s Pharoahe Monch – the greatest MC ever. OK, I’m a bit biased with this one. Still, you can’t go wrong with the love-themed project that spans 15 of the man’s solo recording years.

From his Bandcamp page:

The title (taken from the film staring Bill Murray and Scarlet Johansen) is alluding to the fact that many of these songs have gone undiscovered by the public at large and more importantly Pharoahe’s direct fan base. W.A.R Media presents Pharoahe’s love letter to his fans on this day of love.

Now, this is what I’m talking about! You can tell by the production (from Eligh) that this is something that’s been sitting on the shelf for a bit – from the days when Living Legends were still a crew and not just a collection of great memories for fans. This track is incredible. I’m not familiar with Claire Mortifee but she really worked some old soul magic on this cut. I want to hear more like this from Lucky. The only downside to this song is that it cuts off abruptly at the end. Other than that, it’s musical perfection.

OK, I’m not saying this is an incredible project just because I wrote the liner notes for it. No, I’m saying so because it’s another unique conceptual project from Sach and Inoe, and the world needs to pay attention.

From the liner notes:

Rooted in spirited verses and blunted brilliance, this latest release from Southern California’s very own Name Science, is sure to bring out the Hip Hop lover in you. Sweet Science is art for the lovers of art. It’s both an ode and a nod to the essence of this art form. The tracks presented here are for the taste buds of your ears. For late-night lovers of Kool Moe Dee and Coltrane. These gentlemen, having taken us on conceptual futuristic voyages in the past, continue to cover that fine balance between love for crafting and crafting for the art.

Digital and cassette versions of this project can be streamed in full and purchased HERE.

Whoa, where did this come from? I’m not familiar with this young lady but as of now she’s got my full attention. This is…just, wow! The production is soulful Sunday delight and the vocals smokey and thick. I need more of this in my life. The RZA has done so much over the years to impress me, always in new ways and through different styles, though. The man is a genius. He’s our Allen Toussaint, one of the greatest producers of our generation. Every now and then he drops something like this to remind us.

So, even though you may or may not have gotten the right box of chocolate this past weekend, you can still have the sentiment to last you the rest of the year. Roses wither and chocolate melts, but music is forever. Enjoy, friends.

“It’s often easier for one, to give advice Than it is for a person to run one’s own life…