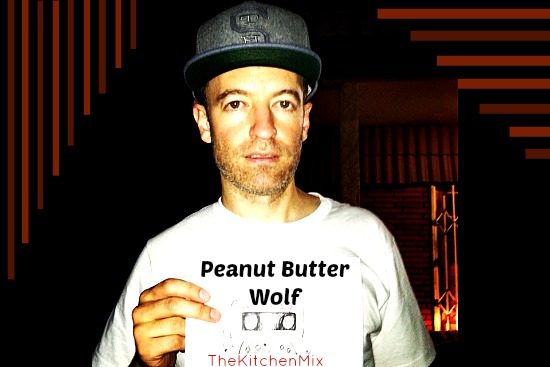 I’ve met quite a few amazing DJ’s over the years. Lots of talented cats who can keep a party going with beautiful mixes and mashups. DJ’s who can WOW you with their blends, beat matching and musical selections. But when it comes to rocking a party as a combination DJ/VJ there aren’t too many that can touch the amazing talents of Peanut Butter Wolf.

The first time I saw a DJ use chopped up video footage to accompany the music was about 10 years ago when I saw DJ Shadow. The cuts, edits and blends that we were hearing through the speakers were equal to what we were seeing on the giant screen. I remember thinking this is where DJing is going, every DJ will be doing this audio/visual party rocking before we know it. Unfortunately, I haven’t seen another DJ do that…until I got the opportunity to catch PB Wolf rock a set. And I’ll be damned if it wasn’t one of the best sets I’ve ever heard…or seen – witnessed.

My introduction to Peanut Butter Wolf was the now classic, My Vinyl Weighs a Ton. Boy, did that album get some serious playtime when it first dropped. Even hearing it now brings back so many great memories from the turn of the century. After that, anything put out on Stones Throw (PB Wolf’s label) became an automatic must have. Not only was he putting out amazing music but he was putting out work by some of the highest caliber artists the world of Hop Hop and later Funk had to offer.

That album introduced me to some amazing artists (Planet Asia, Rasco, Charizma, Kazi, and Zest) and featured a host of others that I was already keepin’ an ear out for. For those that don’t know, Charizma was the first artist that Peanut Butter Wolf worked with and although he passed away in 1993, a collaborative album was put out in 2003. If you haven’t heard Big Shots, you need to get on that.

I shared this trailer for the upcoming Stones Throw documentary back when they were running a Kickstarter campaign to raise money to finish it. Well, they met their goal so the finished product should be hitting us real soon. Check it again.

I was able to catch up with Peanut Butter Wolf and talk a bit about food. Here’s a little taste of our conversation:

TKM: I mean, you create music and you eat food…

PB WOLF: I guess I can say anything right?

TKM: Yeah, of course. I mean, are you into food? Is it a big deal to you? Are you into cooking it? There’s no wrong answer.

PB WOLF: I mean, the foodies are always – they get carried away with it.

TKM: So you’re obviously not a foodie. Haha. So let me put it like this – how do you feel about eating and food preparation? Is it important to you?

PB WOLF: Yeah, I love nice restaurants and I love McDonald’s and I love everything in between. That’s how my music is too, though.

TKM: I like that. And just to be clear I don’t consider myself a foodie by any means. I ask that question to all artists.

So there you have it, Peanut Butter Wolf is a non-foodie. And while I like food and am always down to talk about it, I am not one to think I know everything about every dish – I’m really a non-foodie too… But that doesn’t mean I can’t prepare a bomb snack. Let me share one of my personal favorites with you. Coincidentally (or not), one of the main ingredients (of which there are only 2) for my favorite recipe is peanut butter. Usually, wifey handles all the food and recipes so bear with me:

Peanut Butter and Apple Delight.. Prepared with love by a non-foodie:

First, select a Peanut Butter Wolf album to bump as you prepare this little delicacy. I chose B Ball Zombie War but you could substitute just about anything he’s had a hand in (remember, Big Shots would also be a good choice). This step is very important. Please, do not skip.

Next, make sure everyone else in the house is either napping or in some other way unavailable (because they will want to eat your goods once they’re prepared. Especially if you have kids.) I usually wait for nap time to approach before I begin.

The third step consists of gathering everything you will need in order to work your magic in the kitchen. These include:

1 gala apple, preferably organic (Honey Crisp are dope also)
1 container of Trader Joe’s Organic Creamy Salted Peanut Butter
1 knife (butter knife’s a pretty worthless for this recipe, so get you one of those ginsu knives. Those joints are so cool, they can cut through a can and a tomato!)
1 cutting board (because the counter tops will get scratched if you don’t use one. But if you do scratch the counter tops…blame the kids) 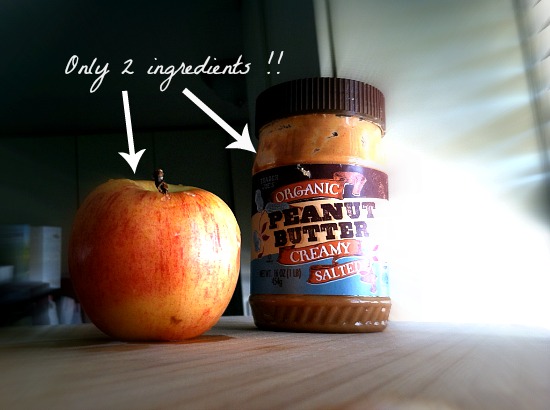 OK, now you’re ready to start. Begin by slicing your apple into quarters, or eighths, or sixteenths, really whatever you’re feeling. Sometimes I get a little carried away. Oh, and I actually didn’t even use a ginsu knife, but they are really cool. You’ll notice in the ingredients it doesn’t specify an amount of peanut butter to use. I was vague and just said one container. That’s because I usually just keep a container on hand. I only used a fancy little dish to display the peanut butter in the picture. You can just use a spoon and scoop out peanut butter as needed if you’re feeling lazy. The last step is to dip the apples into the peanut butter or use the knife to spread it on. Double check that the kids are in fact asleep. And enjoy. This is a great recipe and a super tasty treat. It is absolutely not the recipe of a foodie. Rather, it’s a recipe of a guy who listens to good music and likes to enjoy apples and peanut butter alone. Try it. 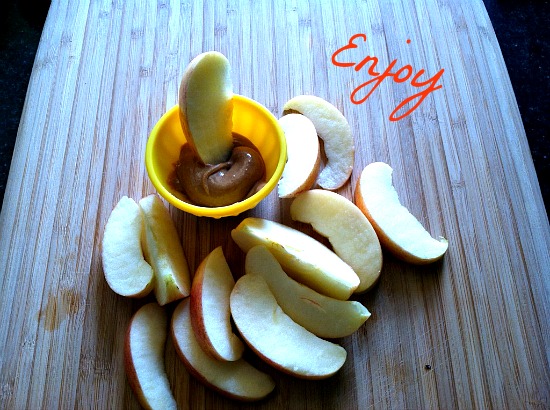 Hey, be sure to check out Peanut Butter Wolf on all of your favorite social media sites and cop a few of his releases HERE. If you get a chance to check out one of his live performances…do it! I hope you’ll try my recipe. If you do, let me know how it comes out. Remember, the recipes are usually my wife’s jurisdiction…