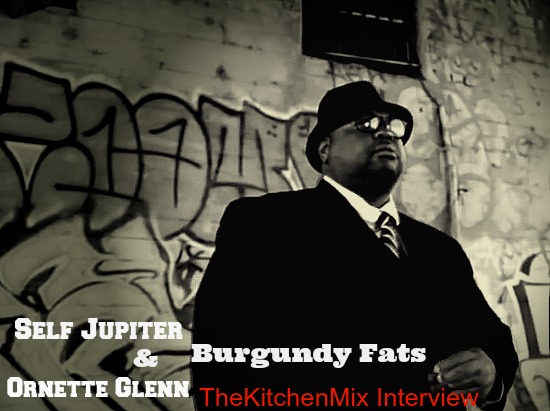 “We cannot change unless we survive but we will not survive unless we change.”

I don’t know who said it but it’s been in a frame in our house for years. Change is good, right? To not change is stagnation. And that’s not good. I don’t mean complete physical change or change so extreme that the original is no longer recognizable. I’m talking about specific and deliberate reinventions of ourselves that are necessary for creating those visions we have for our future. Think Muhammad Ali not Chad Ochocinco.

Can you think of a more influential group from the West Coast than Freestyle Fellowship? Yeah, me neither. Those guys were some serious game changers. The domino effect of what they created with their innovative styles is still being felt today.

We recently caught up with a member of the original Innercity Griots and talked about food and music. Ornette Glenn, known to the Hip Hop world as Self Jupiter, was the more abrasive side of Freestyle Fellowship. He’s recently taken on the name of Burgundy Fats and become the change that he wished to see in this world. Listen in on some of our conversation that went from healthy eating, to the reinvention of Self Jupiter, to new projects. And, for the record, he had a little help with some of the food questions from his lady, Alicia.

TKM: You were mentioning that you’ve been eating healthier as of late. Tell me about that. Talk about healthier…

TKM: What’s a typical meal for you guys? What’s your go-to?

SJ: Kale, kale, kale…kale. Like I said, healthy, organic, seasonal. Maybe like rice and kale and baked tofu or baked chicken. A protein, a healthy grain, and lots of vegetables. You know, simple, easy, delicious. Always vegetables on the plate. I call it “conscious comfort food made with love.”

TKM: Yeah, I love that. And what are you guys trying to stay away from?

SJ: Well, we’re not very lactose tolerant. So, we don’t do too much dairy or eat too many sweets – but every now and then you go to a movie and treat your girl to an ice cream cone.

TKM: Nothin wrong with that. So, what prompted the whole eating healthier switch for you?

SJ: Consciousness. And love. When you’re in love with somebody, you want to see them healthy and survive. You want them to live so you do what you can to take care of each other and yourself – live longer to be together longer.

“Always vegetables on the plate. I call it conscious comfort food made with love.”

TKM: How about touring and being on the road? How’s that?

SJ: Oh, that’s terrible. Food’s terrible. I mean it varies. I’ve been to venues with kitchens that are bomb but that’s rare.

TKM: What about in other countries?

SJ: I’ve only been out of the country one time – back in 92 or 93. But that was back with the record company – per diems, five star hotels, so…pretty good. But that was a whole different time. But ask me next year and I’ll tell you all about Japan and Europe. They already asked and it’s about time I make a run out there.

TKM: Cool, I will. Well, tell me about the new project.

SJ: The Legend of 1900. Burgundy Fats. I’m working with Slippers out of Long Beach – a four piece band. My boy Brandon on the drums, Mike Cody on electric, Victor on the rhodes and Blake on the bass. We got funk, jazz, blues, pretty much a retro feel to it. I’m on some poetry composing – bringing people into my zone. If you didn’t know it already, my granddaddy played in Duke Ellington’s band. I just remember being in the basement while he was jamming and it just reminds me of some of the things they’d be playing. You know, it’s like I reinvented myself a little bit. Of course, I’ve got a different name, going under Burgundy Fats – trying to reach out to newer fans and do something different.

TKM: Dope. So, it’s 100% sample free and all live instrumentation?

SJ: Yeah, sample free, four piece band – it’s good for you, it’s good music. We’ll be on wax pretty soon. My label, Voila Entertainment along with my band’s label, Sleepy Hollow Records, together we do some good things. We got Aceyalone and Myka 9 on another project – pretty much a Fellowship album coming out soon, all live, called Get Your Ass to Mars. We have Alpha Pup distributing. I got it all on Bandcamp right now but the wax will be coming soon.

TKM: How has it been different doing the live instrumentation from just, say you and Kenny in the studio?

SJ: Well, I come from the early Fellowship and we had a band, Underground Railroad. You have freedom when you have a band. A little bit more liberating, I would say. You’re not confined to anything but it’s all in the mind anyway. And I also have another Kleenrz album coming out soon. I gotta keep it coming out. Can’t stop, won’t stop.

TKM: Yeah, man. And the other thing I noticed was that you really slowed it down with the vocals. Now it’s easier to catch everything you’re saying and absorb it the first time around, as opposed to the faster style I’m accustomed to hearing.

SJ: I always listen to things I did in the past and you always want to do better. My best analogy is that Jordan – after awhile he’d stop and hit you with that jump shot. Not always dunk the ball, he’d hit you with that jump shot. I would say, what you want is people to understand every word, you don’t want to say words that go over their heads too much, don’t want them to miss it. Articulation, articulation. You want people to get the whole of where you’re coming from. That choppity-chop stuff is a little played for me. I mean, people still chop but – we made so many styles – we’d go with one style and then go to another. I keep it moving – that’s a true artist. Do what you feel. Let the people know that the mind’s working on all the elements. And hopefully people will get it and buy it. But if not, there’s gonna be another one right around the corner.

TKM: And tying it back to music, how would you say that food relates to the creation of music?

SJ: It gives you energy. You gotta be well fed to keep the mind working.

Self Jupiter a.k.a. Jupe a.k.a. Jupacobrah a.k.a. Burgundy Fats…this man of many names and many styles has put out so much amazing material that I don’t even have time to school you on that right now. I don’t have time to tell you about his projects with Kenny Segal, the Kleenrz. Getting into the incredible range that Freestyle Fellowship covered would take too much time. His work with Project Blowed and Heavyweights is too impressive to get into right now. But, we live in the age of the internet so you can access all of that for yourself. In the meantime, follow my dude on Twitter and hit up his Bandcamp page to keep up with his recent and upcoming projects. I highly recommend you check out The Legend of 1900 which you can stream up above or download at most of your fine online music retailers. Tired of music on the radio? Be the change you wish to see in the world and start by getting down with some of this good independent Hip Hop. Enjoy!

This is for my supporters: fan, family and friends… You know what I love most about Gang Starr? It’s…