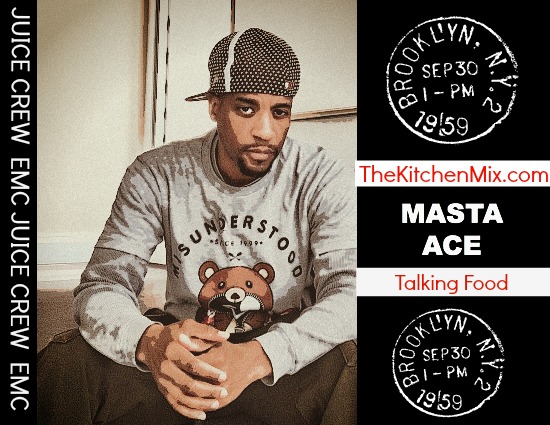 “All up in the mix like blenders” -Masta Ace

If you’re my age and came up on Hip Hop, you probably first heard Masta Ace on this Juice Crew classic cut right here. If you’re a Hip Hop Head, you already know all of his classic joints. And if you’re a lover and supporter of quality Hip Hop music, you already know about his work with the Juice Crew, EMC, Edo G, Marco Polo, the original Crooklyn Dodgers, man the list goes on…

Which is why I was thrilled to have the opportunity to sit down and talk food with this legend in the game. This guy is one of the greatest to do this rap thing and he’s been doing it since before Jordan and the Bulls started winning championships. He has been one of the most consistent artists that has ever represented the culture. Just last year I was including his album MA_DOOM: Son of Yvonne on my list of top albums of the year. Before that he had put out an amazing album with the great Edo G. And I could go on and on about A Long Hot Summer and Disposable Arts. But more for that later. Today let me share some of the conversation that I had with this microphone master.

MA: When I’m comparing my food to my music I’m comparing it to good, slow-cooked food for the Soul. It’s that big pot of something that sits on the stove for hours cooking until the meat’s falling off the bones. When I use food as an analogy for my music, that’s the way I compare them. I take my time putting my music together in the same way that a good home cooked meal takes time to prepare.

TKM: I like that. Do you have any certain dietary restrictions? Anything you’re really trying to gravitate towards or stay away from?

MA: I have dietary restrictions that I’ve sort of self-imposed. I haven’t eaten pork since I was about 20 years old. So, about twenty-something years ago I stopped eating pork. And in more recent times I’ve all but eliminated the white foods – white rice, white flour, white sugar, white bread…those are the kinds of things that I’ve self-imposed.

TKM: How did the elimination of the white foods come about?

MA: I was doing some reading, some blogs and TV shows. I watch Dr. Oz, he always has some interesting ideas on there. About six or seven years ago I did this thing called the Master Cleanse. Kinda cleaned the body out and the book that came with it had some interesting information in there about what we eat. So I picked up some things from there. From friends, people that are into eating healthy and eating right. You just kinda grab little bits and pieces of advice from wherever you can get it and you try to kinda customize your diet and your nutritional plan for yourself based on all that information out there.

TKM: Yeah. I’m curious about the Master Cleanse, though. Did you do it exactly to a tee?

MA: Yeah. The first time I did it, I did the full 14 days. It was rough! I lost a whole bunch of weight. And since that time I’ve done it twice more but only for 7 days.

“When life gave me lemons, I took the Master Cleanse” – The Grouch

TKM: Nice. So, with that you were eliminating stuff but did that prompt you to start gravitating toward something that maybe you weren’t focused on before?

MA: Yeah, that played a big part of it because the first time I did the cleanse, I did the cleanse and then just basically went back to the way I was eating. And almost immediately the stomach started coming back, the weight started coming back, all of that. I wanted to be a healthy weight. I said, “This doesn’t make sense.” That’s when I started to initiate some changes into my diet.

TKM: How about with touring? How does touring affect the kind of lifestyle you’re trying to keep?

MA: It doesn’t really affect anything because I actually bring a lot of my – like, I bring sugar in the raw with me, I bring agave with me, my writer for the promoters that book me has very specific things on it like fruits, vegetables, no pork, no white bread – just very specific things. So, the stuff that’s backstage at my shows is stuff that I would consume. I don’t eat at truck stops and things like that. What I’ll do is I’ll bring with me some raw cashews, raw almonds, raisins and I snack on that stuff in between meals in order to cut down the craving of wanting to eat something bad. When we’re overseas I will seek out a nice sit down restaurant. I try to find good, gourmet-styled cooking. I’m not big on grab-something-and-go-back-to-the-room. I like to sit down at a proper restaurant with a waiter or waitress and order something nice that’s cooked well, seasoned well. I like traveling with Marco Polo cuz he’s like me in that way. He likes good food. Some of the other guys will go to Subway and call it a day or McDonald’s. But I refuse to do that. It’s cool to travel with people that are on the same page as you.

TKM: Have you ever noticed anybody changing their eating habits because of the restrictions you’ve put on yourself?

MA: Yeah, my boy Stricklin, who’s been traveling with me since probably 2001, he started taking on the raw sugar, he stopped drinking soda – he was a big Sprite drinker, stopped eating pork. He made some major changes. Plus, he’s an EMT paramedic so he knows what having a bad diet and bad nutrition can lead to. He helps people to the hospital that have diabetes, high blood pressure, strokes, heart attacks – he came to the realization that if you’re doing the wrong things nutritionally, eventually you’re gonna be in trouble.

TKM: Right. So, your kitchen skills – you get around in the kitchen real good, then?

MA: Yeah, I cook pretty good. My wife is definitely better than me but during the summer months I cook most of the proteins out on the grill. I’m a big griller. My wife gets a break from some of the cooking during the summer months. Whatever the protein is – chicken, fish or beef, which I’m trying to cut out. I season it, I marinate it and then throw it on the grill! My daughter, she’s 8, she’s open to trying stuff that I make like quinoa or whatever. I’m open to trying different tastes and flavor and so is my family so…

MA: Everyday! Every single day. That’s why I love traveling – like, I just learned about quinoa. I was in Canada and I was at a restaurant reading the ingredients to this salad and I asked the waitress, “What’s this?” Quinoa, a super grain, she knew all the history of it and broke it down for me. I tried it. Ever since then – I don’t even eat rice anymore. Quinoa’s even healthier than brown rice.

TKM: What else, other than the quinoa?

MA: Beets. As a kid, I was very opposed to beets. I didn’t like the way they looked, smelled – I was only aware of the beets that came in a jar in that pink liquid. I’ve incorporated beets, butternut squash, brussel sprouts…I’ve just discovered vegetables in a whole new way as an adult. Oh, almond milk. Almond milk was a huge discovery for me. I stopped doing dairy about 7 years ago. So, I didn’t do cereal anymore. I tried almond milk and lo-and-behold I can eat cereal again. Cereal was reintroduced into my life and it was a happy day for me. Like, wow, I can eat cereal again.

TKM: Do you ever do smoothies?

MA: Actually, I leave Friday for Europe and I have a portable smoothie blender that I can bring with me. I recently discovered hemp protein and hemp seeds, I bring that with me as well. I work out when I’m on tour now, too. I get a work out in, some cardio, some strength training and then I come back to the hotel room, grab some fruit that was from the show the night before, blend it with some almond milk. Blend it up with some agave nectar. Make a little fruit smoothie, it’s the best!

TKM: That does sound good. Do you have a more specific recipe that you can share with us?

MA: Well, how about I give you my hemp protein smoothie? I start with a cup and a half of almond milk to which I add maybe 2 table spoons of agave nectar. I just recently switched to unsweetened almond milk. I take a banana – usually a banana that’s been sitting out too long, starting to get brown spots – what I do when they get to that point is freeze them. So, I get the frozen banana, peel it and drop that in. I buy a variety of different frozen fruit – no sugar added frozen fruit. The one I made this morning was a frozen mango, strawberry, and banana smoothie. And then I put 3 heaping tablespoons of hemp protein. Blend it. You may have to add a little more milk depending on how thick you prefer it. It’s healthy, it’s delicious and I enjoy them. It’s pretty basic and pretty simple.

TKM: You already know we’re gonna be making the Masta Ace Smoothie. So, last question. True or False: You are what you eat. 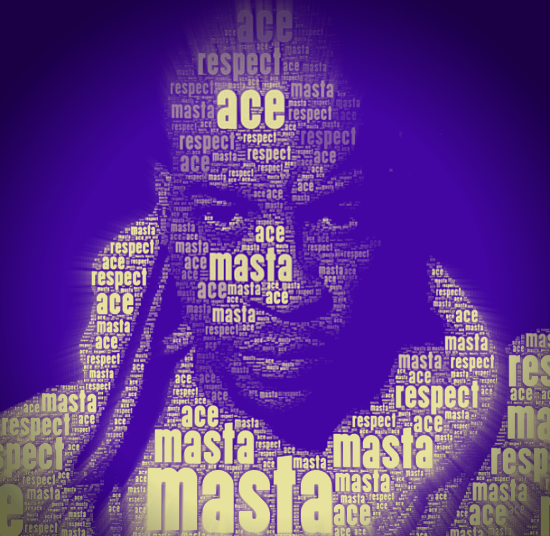 Check out this nice mini-doc put together by D-Nice that explains how fate and an MC’s ego led to Ace being part of the all-time classic, The Symphony…

Yo, Ace is one of the hardest workers in the game. This dude puts. In. Work. Catch him on tour if he makes his way anywhere near your vicinity. He’s quite active on all of your favorite social media sites but if you’re looking to stay up to date at a one stop shop, make your way to his official site.

Make sure you work your way through his entire discography. So many gems. And again, if you still haven’t heard MA_DOOM: Son of Yvonne, you probably should. It plays like a memoir and it’s Ace over DOOM beats…c’mon, what’s not to like? You know I’d never lead you astray.

Keep us bookmarked and stay tuned good folks, we have so much more greatness on the way for you. More recipes and always good Hip Hop. Peace.