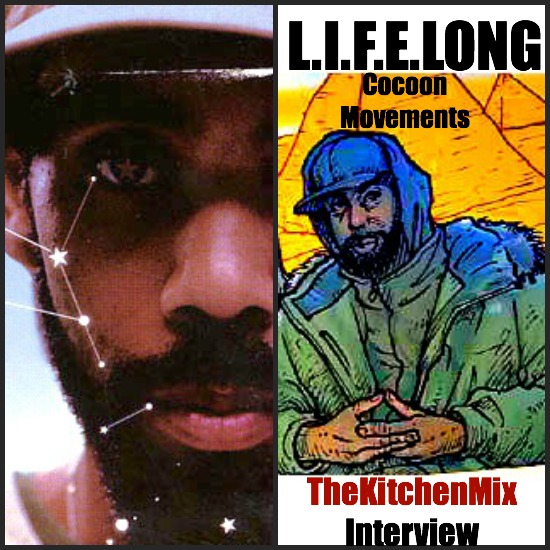 I first became aware of L.I.F.E.Long on a release by Anti-Pop Consortium back in 2000. That crew was coming with some next level ish and I was all over it. I copped the vinyl 12″ to the track What Am I?. Everyone on that track dropped a nice verse. I knew the dudes from Anti Pop and I was well aware of Pharoahe Monch, but who was L.I.F.E.? Then, Cannibal Ox released The Cold Vein and the first verse on Battle for Asgard was by an MC named L.I.F.E.Long. Next thing I know, this rhyme dropper is popping up on many of my favorite MC’s projects. He was killing tracks with C-Rayz Walz, Immortal Technique, Prince Po from Organized Konfusion and Aesop Rock. 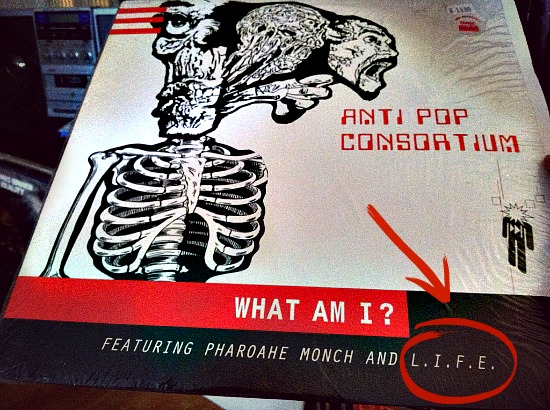 Just the basics -a Dj and an MC…

“Ayo, you still want more?
So, I’m feeding you
More nourishment from Chef
You already know who”

In 2007 dude dropped his solo album, Longevity Vol. 1.5. That was one of my favorite records of that year. Solid production and of course, high quality mic ripping from everyone who contributed to this project. I strongly urge you to pick this album up (it’s a good mix of boom bap and Rawkus-type production). Physical copies might be hard to come by but you can always cop it digitally HERE. If you’re just gonna grab one track, make it Self Examination.

You already know how much I enjoy talking to my favorite artists about food and music, so you know where this is going. I chopped it up with Liggy Long and talked vegetarianism, got the recipe for “Rasta Pasta,” got hipped to a project that had slid under my radar, and learned about his new label.

L: I think food definitely relates to the creation of not just my music but my life as a whole. I mean, you are what you eat! Anything that you intake comes out of you and our spirit and mind absorbs what we put in our bodies, negative or positive. That is why I try my best to eat as healthy as I can, watching what I eat and also eating certain things in moderation.

TKM: What are your thoughts on food choices and healthy eating?

L: I’m a vegetarian! I’ve been one since the year 2000. Although, I do eat some fish and dairy. I’m all into healthy eating. Like I said before, you are what you eat!

L: I, myself, am gravitating to more and more raw foods. Trying to juice more and eat raw veggies, fruits, etc. The preservatives and chemicals that are in most foods are really harmful. You got to be careful! And as a vegetarian we got to watch the soy intake. Soy is big business. Not all of it, I’m hearing, is good. Although it’s a great meat substitute and in a lot of vegetarian and vegan diets. I’m also trying to avoid dairy, although cheese is like one of my addictions, and also cutting back on a lot of fish. Like, I’m not a big bottom feeder eater (shell fish). Talapia was a fish I loved but I’m hearing a lot of negative things about that fish so I cut that out recently, too! Of course sugar, too – really trying to cut down on the sugar intake. Although, I have a sweet tooth. I love junk food too, which isn’t good for me AHHHHHHHHHHHHHHHHHHHHH!

Pasta (any of your favorite brands)
Vegetables (any of your choice)
Red Pepper
Green Pepper
Onion
Tomato Sauce (marinara, white, whatever you prefer, you can also add tofu or ground soya)
Vegetable Oil
Sauce pan
2 nice sized pots – one to boil veggies one to boil pasta (choose accordingly to your serving amount)

Boil water (I like to add oil & seasonings in the water while its boiling garlic, salt, pepper etc.)
When water boils, add pasta.
Boil veggies
Warm sauce (add green peppers,red peppers,onion)
After pasta and veggies boil
Drain Pasta
Drain veggies
Chop up veggies
Add to cooked pasta
Or you can add to sauce
Add seasonings, etc.
Add sauce or you can serve sauce separate with added veggies
Stir pot with veggies, pasta and sauce. You could also put grated cheese on top, which gives it a nice kick.

There you go. Depending on your serving size, add more or less veggies. This is a quick, on-the-go, lazy bachelor kind of meal…

TKM: Alright, looks like we’ll be having “Rasta Pasta” this weekend. Thanks for that. Let’s switch it up a bit and talk about music. What have been your greatest accomplishments thus far and what projects are you most proud of?

L: I definitely would say my greatest accomplishment was being able to visit other countries throughout the world and see the response from the fans! For example, my last overseas trip was to Belgrade, Serbia. I didn’t know too much about the country and it was very humbling to have people know who I was and say they appreciate what I have done. I’m not sure which project I’m most proud of? I treat all my projects like my babies! I love all my solo releases. Haha. Each project I put out was a struggle and learning experience of its own! It’s amazing how people who are not artists don’t understand the real behind the scene grind it takes to put out a project. The sweat, tears, money, conflicts with relationships, etc. This artist life is no joke!! But I am amped off the project I completed with emcee “Masai Bey.” We finished a project called “Auxiliary Arms,” the lp is called Guardians of the Gate Part 1. CD’s will be released thru my record label Cocoonmovements soon! But the digital release has been floating around for a few months now. Loving all my new work with the Cocoonmovements camp, my caterpillars! Our mixtape we got promoting the label is real beastly! The compilation is pretty sick, too!

TKM: Dope. So, why don’t we wrap up with you sharing with us any projects you’re currently working on or things to look forward to in the future?

L: Trying to finish up a project with A Serbian producer named “Kiza.” Also, another project with U.K. producer Bunty Beats. Maybe another solo LP with different producers, who knows. Haha. These days I’m mainly just working on getting my label out there. I have a record label called cocoonmovements. I released a few projects so far. Currently, an artist by the name of “Syntax” has a project out called Dialog’a’Rhythmic. Just been promoting that. Got a mixtape coming soon to promote the artists on the label – I’m on it as well. We also have another artist, Elohem Star, who will drop his LP in 2014 and then you will hear a compilation from the label. A lot of stuff coming in the future! Stay tuned people and eat good!

Interesting fact that I think is no accident: if you do any kind of online search for L.I.F.E.Long or any of his projects, tracks or albums, what’s going to pop us is lots of health related information and resources. With album names like “Longevity” and “Visits With the Medicine Man” and tracks like “Self Examination,” it’s hard for search engines to differentiate between the art and the lifestyle. I say it’s no accident because as a vegetarian and conscious eater, that’s gotta come across in his music somehow. And isn’t that the point of this whole thing, to find out the relationship between food and music? On the track Cocoon Movements from last year’s Visits With the Medicine Man he says:

Be sure to stay up on all his future projects by following him on facebook and checking back here for more information. I’ll be sharing info and interviews with artists on his label in the very near future. Keep an eye out for that. As usual, always giving you the goods like farmer’s market foods. It all starts from the inside, y’all.

There’s still time to make this for Thanksgiving!  Yes, I definitely think you should. It won’t leave you feeling…