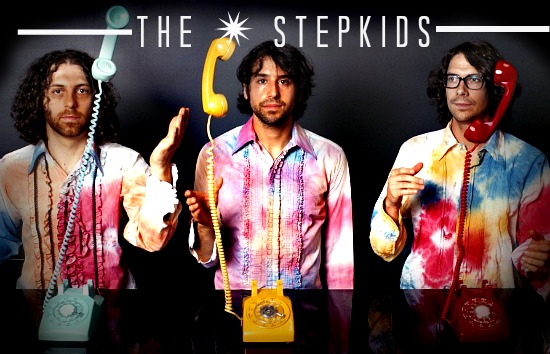 Yesterday was beautiful, it felt like the first day of fall in Phoenix, and that’s a big deal. So I took my kids on a nice long walk to enjoy the brisk freshness of the morning. I mentioned to my kids that I thought that it was the most beautiful day of the year. My youngest responded, in typical three year old fashion, with the dreaded question – “Why?” I mean, it’s easy to see why and would be apparent to anyone else on the block but sometimes kids need the obvious pointed out to them. Sometimes it’s hard, but it keeps me sharp and acutely aware of all of the nuances around in me in those situations.

One of the best live acts I’ve seen this year is a three man band that goes by the name The Stepkids. These guys make amazing music and put on a helluva show. Believe me when I say that they are some of the best at what they do. We’re all adults here so don’t ask me why. All I can tell you is that when three equally talented and musically gifted dudes get together and start putting out albums on Stones Throw Records, it’s a win for everybody. If you’re not in the know, start by streaming their most recent release down below. Then make your way back to the older material. And if you already know what’s what then why ask why?

These guys deliver the goods with an amazing mesh of everything you love about funk, R&B, psych rock and sprinkles of anything Hip Hop has ever sampled. It’s a unique sound but at the same time sounds so familiar. They’re the reflection of all of your musical memories squeezed into a three piece unit.

…they’ve utilized kaleidoscopic projections to enhance their music and turn their sets into fully immersive experiences for their audience. But there, too, the band is evolving. “We’ve actually started to do acoustic performances and acoustic videos, broken-down stuff without any production,” says Gitleman. “We’re trying to expand the brand and do more psychedelic stuff, but also more of the revealing, conventional type of performances.” “We thought our fans would want to be able to focus on what we’re actually playing and who’s actually singing,” adds Edinberg. “We’re all for that, too. We like a healthy mix.”

“A healthy mix.” That’s what I’m talking about. 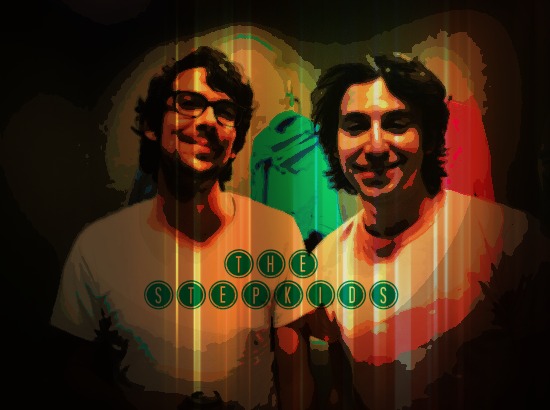 Not long ago we caught up with 2/3 of The Stepkids (Dan Edinberg and Tim Walsh) and talked at length about music and food (it was fun to get into a never ending food conversation with people that are equally excited about the topic). Check out some of the conversation that we had…

Dan: Well, you need food to live and you need to be alive to create music.

Dan: One of the other things I’d like to mention about the similarity between food and music is – when you’re cooking something, it’s very much like writing music, actually. In fact, I’ve always equated them because really the point of cooking something isn’t really you. I think it’s generally for sharing like music. Different spices you use, different chords you use, different colors, different textures – at the end of the day it’s a serving that you’re dishing out.

Tim: It very much becomes like a performance art, shall we say.

TKM: Do you guys get down in the kitchen?

Dan: I have an empanada business with my girlfriend. It’s called Empanada’s DPM – That’s empanadasdpm.com And you know, we do it just for fun but we were lucky enough to be featured on the Cooking Channel a couple of years ago. She’s Argentinean and we make empanadas in the style of la casa – we make them like they’re coming from home. We have beef – the Argentinean traditional is beef, raisin, hard boiled egg, and green olives. And you season the beef with cumin, that’s the key part of it. Then we do a chicken, roasted red pepper, caramelized onion and kalamata olive. And the one that we invented, that we didn’t learn from her family, is the turkey, apricot and cashew. That one is usually a pretty popular one. We’ve been experimenting a lot with corn but I feel like making a vegan empanada (excluding the lard). It’s a very amazing cooking challenge. It’s like putting a limitation on a song you write. Like the song can only be bass drum and kick drum – go. Wait a second, I need snare, I need that dough.

Tim: Very interesting. Good plug! I’ve had the empanadas and they are amazing. I haven’t had the turkey, apricot and cashew one. That’ll have to show up at some point.

Dan: You know, Tim may be shy to admit this but he roasts his own coffee beans.

Tim: Yes, I do coffee. I will mash my own beans and I do other things. Me and my girlfriend are cooking soups all the time. We have a kale soup that’s a pretty standard affair.

TKM: Man, all that sounds good. Can you break down a more specific recipe for our readers, though?

Tim: One of my favorite things is making what we call corn butter. But, there’s no butter. It’s literally just corn and a little bit of salt. You hard press the corn, you juice it. And after you juice it you cook it so it thickens up a little bit, put in a little sauce and serve it with pappardelle pasta and a little bit of sausage. It’s an amazing dish. The flavor of corn is actually very complex just by itself. It really blows people away when they try this quote unquote corn butter or corn sauce.

TKM: You juice it in a juicer?

Tim: Yeah, but we don’t have a juicer so we hard press it. Cheese cloth, round after round. I like to use the emersion blender but if you have a juicer that’s a way easier way of doing it. If you get a juicer, get the one that spins sideways because it’s so easy to clean. The other ones are a pain in the ass. My sister has one, I saw it and I was mad jealous…mad jealous.

TKM: Do you guys have any dietary restrictions? Or stuff you’re trying to gravitate towards or stay away from?

Tim: I try to gravitate towards butter and stay away from salt even though they kind of go together at some point. I chase fat but not sodium.

Tim: Yeah, I’m used to making all my soups with no salt. If there’s say, a little bit of chicken broth, that’s enough salt content for me. Or like bacon, that’s your salt.

Dan: Well, for me it’s all about health. I definitely believe in eating food that you can trust. Meaning eating food that you know where it’s coming from, and you know what’s inside it. You know, you don’t need complicated chemicals inside your food. It should be coming from near where you are located at the time. That’s what I believe. And I watch out for my cholesterol. I try to get the best proteins I can sticking to a vegan diet whenever possible. Even though I’m not a vegan. Because when you’re traveling, I find that I’m way less likely to get sick or have a bad reaction to stuff if I’m eating vegan. But it’s hard when traveling to eat wholesome vegan. So, basically all I’m trying to say is that I think about food constantly on the road. It’s something that’s easy to take for granted. But on the road there’s a lot of difficulties with that.

Dan: Yeah, donuts, beef jerky…these are all decisions that technically are bad but they happen and it’s inevitable. And when you’re with more people…

TKM: So, what do you order when you have to eat at, say, Burger King?

Dan: We actually don’t order at fast food places. There’s always a way to avoid that.

Tim: Pretty much for our entire touring history – when it’s just us in a van, smelly and doing our thing, we’ve been consistent with that.

Dan: Smart phones have made it easy and so amazing. I’ll be driving and Tim will be like, “Dude, I found this place that looks so awesome.” And we’ll do that. And it’s so much better. It’s possible to always avoid fast food. And even if we’re really in a fix, I’ve found even interesting things that you can get at gas stations.

Tim: The irony is that sometimes you get off at places that you just don’t expect to find any good food – like on our last tour we got off near Washington, Pennsylvania and we found this amazing spot. It’s a piece of gold that you just find.

Dan: We’re gonna leave you guys with this – the number one food experience for this band. This literally smokes all other food experiences – we think. Mrs. Johnson’s Donuts in Austin, Texas (51st and Airport Rd). They’ve been open since 1948. They’re open from 8pm – 12pm. The University of Austin kids jump in on that hard. The beauty of Mrs. Johnson’s Donuts is their commitment to freshness. So, if the donuts are fresh and ready, this gentleman will just give you a donut, you eat it and it’s the greatest thing ever and you try and pay for it and he will not accept it. So, I end up giving him more money because I get very adamant and end up putting more in the tip jar. It’s pretty amazing. It’s the best joint ever. And usually we’ll eat so many – whatever system they’re using, which I guess is just trying to fully satisfy people to the utmost works wonders. And I will say this, too. We’ve been turned away from Mrs. Johnson’s because the donuts were not at the right level of freshness. So, if the donuts have been out for too long, he’ll tell you to come back. If the donuts were just out of the oven, he’ll tell you to come back. Because ideally, they should be eaten like 20 minutes after they’ve come out of the oven. It’s a spiritual experience.

So, there you have it. Corn butter, coffee, empanadas and donuts as spiritual experiences. These guys have a great sense of humor and are some of the coolest, most down to earth folks that we’ve come across in awhile. Do yourself the greatest favor by catching them perform live. It’s a fun experience and you can thank me later. Right now, they’re on a world tour, like Muhammad my man, but when they come back stateside, mark your calendars. You can keep yourself up-to-date on all you’d want to know about the group by hitting up their website or following them on your choice of social media. And as always, if they’ve got new material coming out, I’ll be talking about it. Until then, I’ve got some corn butter to work on.