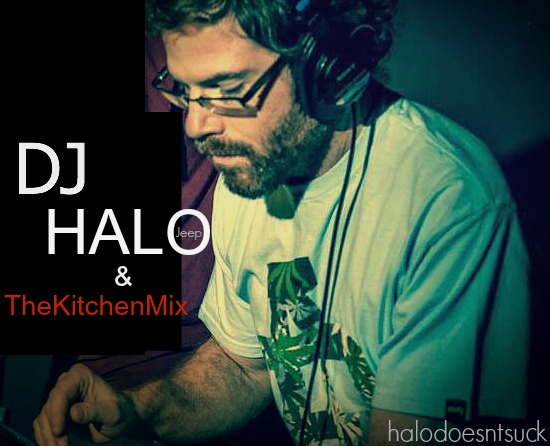 I was trying to explain to my son that commercials on TV have one objective and that is to trick us into buying their product. You never need anything that they’re trying to peddle to you. I told him that anything he really did need he either already knew he needed/wanted or would find out about it from a friend’s recommendation. If you think about it, it’s the same with radio music. Who actually buys music that’s played on the radio? No one I know. Everybody I know buys music that they discover for themselves or learn about word-of-mouth.

A few weeks back we had a nice little feast with our friend PremRock and a few of his friends. One of those friends is today’s featured artist, DJ Halo. I’m gonna share my first hand experience meeting and getting to know him, and based off my recommendation I hope you’ll check out some of his music, remixes and (possibly) live showcases.

Of course, we always get to know people better by talking about food and music with them. You know how we do. Here is some of the conversation we had:

TKM: If you were writing your own Wikipedia page, what would you say about yourself?

DJ HALO: I would probably write this; in third person so it seems like I didn’t though…”Jeep Ward, also know as DJ HALO, grew from being a small gorilla-like child in Kentucky to a mildly entertaining DJ, business administrator, and hack graphic artist. For the most-part his childhood was like any other; skateboards, graffiti, shows and raves with some schooling in there (somewhere). From the moment he stole his sister’s rap tapes and hi-speed dubbed them before she could notice they were gone, he was hooked on Rap music and after exposing himself to rave culture and the turntablist explosion of the late 90’s he was determined to be a DJ. This came in the form of the lowest rung DJ in a box set-up available, the Gemini DJ Pack complete with doodoo belt-drive turntables and all for his 18th birthday. Practicing day and night in his dingy basement he went to college for audio/radio engineering toting the terrible set-up with him to the dorms where, after many drinks, he would play (badly) for hours to the delight of friends who were already three sheets to the wind and to the dismay of all surrounding rooms. Flash forward three years and disaster struck; walking home from a pub in his neighborhood of Westbury, DJ Halo was stuck by a car, left in the middle of his road and subsequently run over by a second car. Flash forward three days later and Halo woke up in the ICU having sustained a myriad injuries, being dead for a brief period, in an induced coma for a day with the worst hit being severed nerves in his left arm leaving it for all practical purposes useless. Determined to still be a DJ, it took 18 months of physical therapy and hours of practice before Halo stepped back in the booth again. Graduating from Hofstra in 2003 Halo pursued a radio career in AR briefly before returning to the Northeast to engineer for radio stations and pick up DJing again. After a few years of hard work Halo became involved with the MINDSpray crew from Brooklyn landing himself the resident DJ gig at their monthly, an NYC underground hip-hop staple held at the Knitting Factory “Style Factory”. From there it was tours and tours and a few more tours with groups like The Metermaids (SFR), Bisc1 (Embedded/DLC), Brzowski (Milled Pavement), Psuedo-Slang (Fat Beats) and DJing residencies throughout New England and NYC. During this time is when Halo met and befriended Ceschi Ramos, eventually was asked to come on the team at Fake Four Inc. as radio promotions director, business manager and now label manager. Halo had always been interested in making beats, having had a super producer roommate in college he was exposed to this realm quite early, using many of the archaic programs in the bedroom producer infancy but never really stuck with it. Flash forward to 2010 and the end of a weekend of DJing and debauchery in NYC where Halo was ejected from a female’s apt at a very early hour; getting home with nothing to do, but being wide awake, Halo thought he would check out Garageband on his new (used) G5 tower; 10 hours and 3 completed beats later Halo was hooked on producing, specifically on remixing. Today Halo resides in the hooker district of Oakland, CA with his GF and 8000 LPs where you can find him Tuesdays at Legionnaire Saloon, spot dates across the country and online most days as he runs Fake Four Inc. into the ground (HAHA).”

Here’s a collection of his remixes…

TKM: What, in your experience, are the best cities for food? Any recommendations?

DJ HALO: I would say my top three cities for food are Chicago, NYC and Portland, ME and my recommendations are as follows…
Chicago – Pho or Chicago style hotdog (there’s 8 specific ingredients and if one is missing it’s NOT a Chicago dog)
NYC – Any pizza place with Ray in the name and Halal trucks (Schwarma!)
Portland, ME – Otto’s pizza (open late!), and Thai on Congress street
Anywhere you can find a “Friendly Toast” EAT THERE.

DJ HALO: Like most 30 something (god that show was pretentious! You remember that show Thirty Something? GAWDAWFUL) aged people I am trying to gravitate towards more whole foods (but not Whole Foods, dang that place is b’spensive): grains, fruits, vegetables, grass fed beef, organic stuff, etc. Taking a company’s word for it on their practices and basically just feeling better about decisions even though it probably all comes from the same place.

DJ HALO: Most of the things that relate to the creation of music for me are PB&J (fresh bread, natural PB and preserves not jelly) and trail mix (unsalted nuts, sulphur-free dried fruits) because it’s quick, relatively good for you, and you can eat it while still working. Also, black tea – I don’t drink coffee (regularly) so I need something to keep me focused and the ritual of making tea is a nice stopping point to think about what you are doing. Kinda like when you are at a certain point painting (graffiti) and you stop, smoke a cig and look at it before going back to it.

TKM: What have been your biggest accomplishments?

DJ HALO: I was an official performer for SXSW last year after 7 years of going down and doing shows at SXSW which was pretty dope. Afrika Bambaataa told me I play good music once – booking a solo DJ tour in Europe – and lastly being able to support a life as an artist which I never thought I would be as a kid, even in HS or college I never imagined I’d be doing what I am doing right now. Life is funny that way.

DJ HALO: As a matter of fact I can!
Here’s what you’ll need:

1/2 a red or Vidalia onion
1 cup of bean sprouts
1/2 lb of ground beef (I like 80% lean, but it’s up to you on that)
1 sliced portabella mushroom cap or 4-5 sliced baby bella mushrooms
1 lavosh wrap
2-3 slices swiss cheese (can sub whatever cheese you like really)
2 tbl spoons olive oil
2 tea spoons ground black pepper

OK, so you cook down the veggies first, mushrooms and onion together in a pan with olive oil and black pepper for about 8-10 min, stirring occasionally. While those are cooking down form your burger, season to taste (I use Montreal steak seasoning) and begin cooking however you like to cook it (grill, skillet, Foreman, whatever). Once the burger is flipped twice add cheese until melted completely on one side. Your veggies should be done by this time, so take them off the heat. BUT WAIT! What about the sprouts? They will be added fresh and uncooked, keep it moving. Take the cooked (I like mine RARE, but you do you) burger and slice it in half, place it in the fold of the lavosh wrap, add the mushrooms & onions, top with the sprouts and you’re done! I like to add Sriracha chile sauce or Coleman’s mustard as a condiment if you are into that. The whole things should take about 15 min. Enjoy!

TKM: Man, that sounds amazing! We’ll be hooking that up for sure…real soon.

This guy gets The Kitchen Mix seal of approval. Super cool dude who likes good food and knows good music. Follow him on Twitter and Facebook to stay up on new projects and events. Also, lots of goodies that you’re gonna wanna check out can be found on his website. Check it out (there’s even a cool interview with J-Zone).

Don’t sleep on the label he’s running, either. We’ve featured several artists on Fake Four Inc. already. Loads of good material. They’re running a 15% off sale for all of December plus you can probably find a few freebies HERE.

Stream some of his remixes and exclusive joints here…

You probably don’t know Walasia. She’s not a Hip Hop artist (in a musical sense). But your favorite Hip…