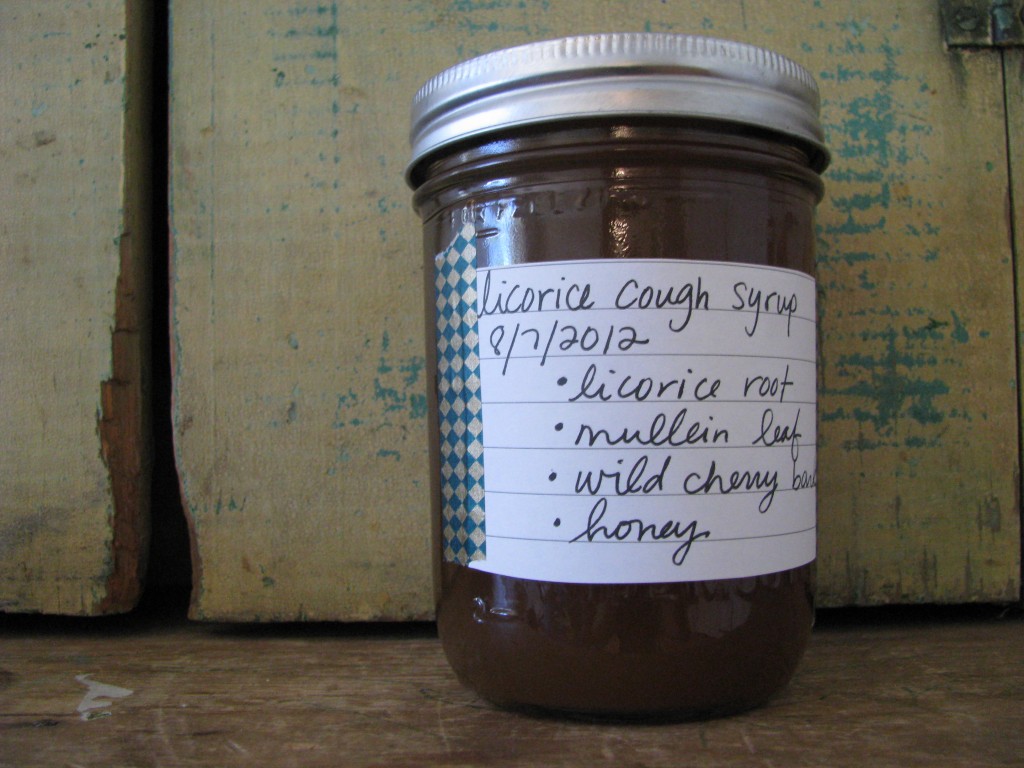 I’m working on a post about goals right now.  I’ve never set goals in my life; it’s a very new thing to me.  In fact, I used to think they were kind of stupid… I’m not sure why.  But something happened at the beginning of this year.  I came to be really unhappy in my work situation and I knew something had to change.  I told myself (and anyone who would listen) that I would not live this way.  “I’m gonna figure out how to make my own money.”  “I’m gonna be my own boss.”

Lots of great things have happened since then, a couple of them being that I realized I am my own boss, and I do make my own money.  As I began to look around at my co-workers I also realized that if I didn’t start setting goals and working toward them I would find myself in the exact same position ten years from now and that terrified me.

So, one of the things I’ve wanted to do for years is become an herbalist.  I’ve always made excuses to why I can’t do it – most of them related to my budget, but it’s finally happening.  I’m officially on my way to becoming a clinical herbalist.  This recipe is my very first medicinal syrup! 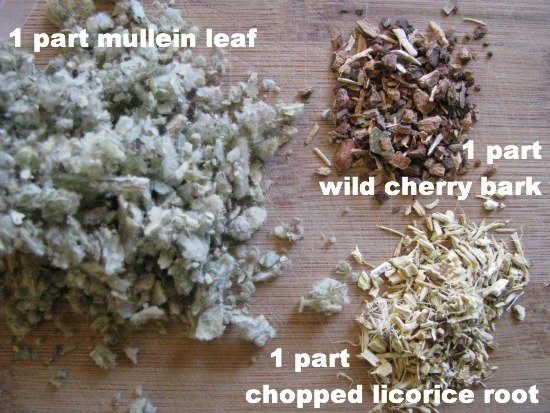 What’s shown here is not proportionate to the amounts used.  I just wanted to illustrate what the ingredients looked like.  Most herbal medicine recipes call for measurements in “parts” rather than teaspoons, etc.  I like that.  It makes things easier and more customizable.  For this project I needed a total of one ounce, so I set a bowl onto my scale and measured by the tablespoonful.  One tablespoon of each until it got close to an ounce, then I took it down to about 1/2 teaspoons.  In total it was  3 tablespoons and 1/2 teaspoon each, but you should measure them out to be sure.

You will also need 1 cup of honey (preferrably raw and local) and 2 cups of water.

Place the wild cherry bark, licorice root and mullein leaf into a medium saucepan along with the 2 cups of water.  Bring to a simmer over low heat.  Allow it to simmer, partially covered, until the liquid is about half the original volume.  I allowed my mixture to simmer for about 50 minutes. 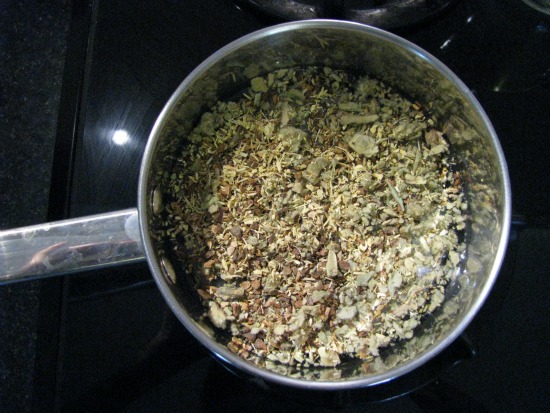 Strain the herbs from the liquid (Rosmary Gladstar says to compost the herbs!  And I appreciate the reminder.) 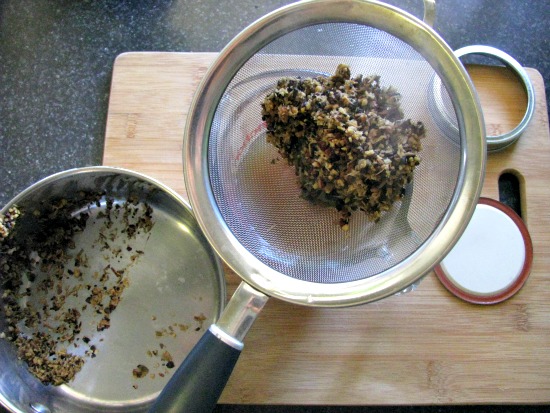 Place the liquid back in the pan and place over low heat.  Add the honey and stir until the honey is completely dissolved.  At this point you could return the mixture to a simmer for 20 to 30 minutes for a thicker syrup.  I chose not to do this because, like Rosemary Gladstar, I prefer to keep the living enzymes in the honey intact.

The syrup is quite watery but tastes really good.

Pour into bottles, or any other glass container you might have and keep in the refrigerator where it will keep for weeks.