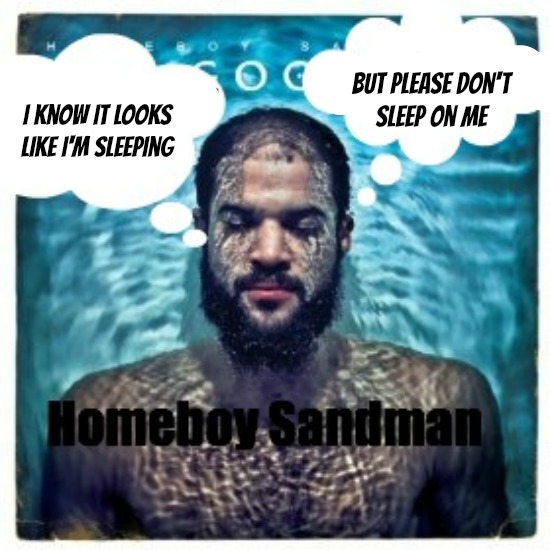 In 2010 when Homeboy Sandman dropped his 3rd album, which was my introduction to his music, I was excited by the hype surrounding his release across the blogosphere.  I got caught up in what became a pleasant surprise.  This track made it into heavy rotation between iPod playlists and CD mixes for my peoples.  I copped the release. Was feeling the “Yeah, But I  Can Rhyme Though” vibe that he was blessing us with.  I had my bleacher seat cushion with me for that bandwagon ride.

The problem. Bad timing for me.  His greatness somehow got lost in the bevy of albums that captured my attention at that time. I was caught up in my renewed love for the Roots with “How I Got Over,” introduced to yU with “Before Taxes,” still high off of Tanya Morgan’s “Brooklynati,” feeling the hybrid sound of Zion I’s “Atomic Clock,” skankin’ to Nas & Damian Marley’s collaborative effort, loving every minute of Reflection Eternal’s “Revolutions Per Minute,” hitting repeat on Bun B’s DJ Premier produced track, getting up on young cats like Curren$y and Big K.R.I.T., getting inspired by the Roots & John Legend collab “Wake Up!,” and discovering Co$$.

Somehow, I didn’t do “The Good Sun” justice and it didn’t get much spin around our household save for the two previously mentioned tracks.  I knew dude was nice with his bars, lyrically sharp and witty as all get out.  He kept popping up across the internets and I would see but not really check for his releases like I should have, in retrospect.

Let me say though, there’s something about his name. Homeboy Sandman. I love that name.  Names are important to me. And that one…I like. Love the term, “homeboy.”

Anyway, a few weeks ago Stones Throw Records, the label Boy Sands is now signed to, and FOUNDation put together a pair of mini docs that help to tell his story.

More often than not, you find an artist that you like, start to really get into their music and somehow unconsciously start raising them up on a pedestal that is humanly impossible to sit upon.  The “wow” factor takes over the fact that they are human beings no different from you or I.  And what happens is, they do something – maybe in words, or actions in front of a camera, or an action at a live show – that somehow rubs you the wrong way and you lose respect for them. Think about it, we do this all the time.  Michael Jackson was king, then he started his six million dollar “we have the technology, we can rebuild him” and kids in bed thing. What happened? He fell off our pedestal.  The other MJ, gets in trouble for some gambling thing that we really know nothing about…respect for him as a person falls. Tiger Woods.  Lebron. Dwight Howard.  Joe Paterno.  Snoop Lion…R. Kelly. I mean, I’m sure there’s a reason they say you should never meet your heroes. People feel genuinely hurt when they’re let down by those that reached their idea of superstardom and the greatness that is implied.  What are the chances you will be let down by the people you admire?

Finally to my point.  Follow me on this one.

I had no kind of attachment or high expectation for Homeboy Sandman when, by happenstance, I watched the first of his mini docs.  I came across it and was like, “lemme check this out”.  Outcome…thoroughly impressed.  Impressed by the way that he was presented as a real person (family oriented, flawed, focused). Humanized, as pundits like to say during election time.  I like this dude.  But, not in a “ill emcee” sense.  There’s something about his persona, a quality that most artists lack. I can relate to this guy.

So, I went back and revisited some of his music that I had on my external hard drive and made a few digital download purchases.  Now, I’m listening to him as a person that makes music, not so much as a rapper.  I’m hearing what he’s saying and…this guy has become my number one artist to keep an ear out for.  He has something to say on many different subjects and I want to hear it.  I like what he speaks on.  Purchased some more of his product and have continued to be wowed.

Then part 2 of his documentary came out.  Equally impressive, attention turned up to ten.  I loved this quote, “when I was growing up the rappers talked like us, we didn’t talk like the rappers.”  Seriously, this dude is so on point.  Authentic.  Puts himself out there in a way that shows his passions are obvious without being arrogant or preachy.  It’s him as a like-minded human being that I’m most impressed with.  There’s no pedestal to put him up on, for me.  This is a guy that I want to see succeed and whatever he’s got going on personally will never affect how I see/hear him because I’m listening to him as a person making music before listening to him as a musician.  I checked out another interview and when asked, “What’s your plan for world domination?”….I doubt many other rappers would respond in the same way he did.  You might hear more mainstream rappers reply that they want to work with a super producer, have a major world tour or sell such-and-such units.  Homeboy Sandman responded with a will to create songs where “every line is quality… everything’s gotta be honest, everything’s gotta be truthful.”  I could never be let down by that.

I hope that the people that inspire you are just that: people.  View them as a human being on a journey doing what they love, faults and all and hopefully you’ll never be let down.  Find people that act in a way that is admirable or impressive to you and make that your gauge for how you view them.  Let their art come second.

Look out for Homeboy Sandman coming to a city near you (with Brother Ali). Also, his new album drops mid September.

Every day should be St. Patrick’s Day, but not in the way you might think. I’m pretty sure most…