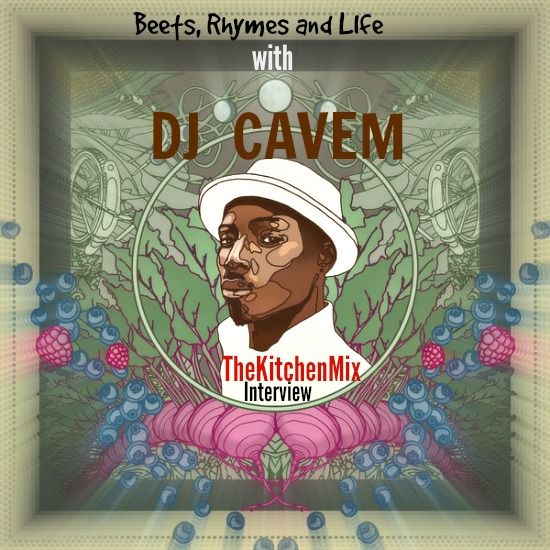 I was explaining the concept of multiple discoveries to my eighth grade students when I had them research elements in the periodic table. They noticed that some elements had more than one individual listed as the discoverer. Helium for example; credit is given to both Pierre Janssen and Norman Lockyer. These two scientists made the same discovery in the same year – that’s a multiple discovery. I bring that up because in this world there are so many people on the same path and have the same goals as you do, or I do. Sometimes they’re farther along that path and sometimes they’re right behind you. But you’re both on your way to a multiple discovery.

We caught up with two incredibly talented and focused people recently, and we’re right behind them, on the same path. See, our goal is sharing good food and music that are nourishing for the mind, body and spirit. Today’s featured artists are doing the same, only on a larger scale.

DJ Cavem and his wife, Alkemia Earth, use music as a tool for educating people, especially the youth, about food, healthy eating, holistic nutrition, gardening and access to resources.

Talk about being an O.G. – an organic gardener. What are you growing?

I’ve got some organic corn, heirloom tomato, of course, peppers, collard greens and kale, squash, sunflowers, giant pumpkins, okra, grapes, lavender, herbs, the good things. The things that taste great. I’ve been cultivating this community garden for about 5 years. I’m a farmer. I come from a family of share croppers. I write music about food because I know what it means to be hungry.

How would you say that cooking and preparing food relates to the creation of music?

I’ve related them in many ways. In my songs – I’ve got numerous songs about cooking, one of’ems called “Home Cooking” from The Produce Section: The Harvest. It’s a recipe I want to promote in collaboration with Bryant Terry out of Oakland. I’m currently writing a new cookbook with my wife called Damn Near Raw. That concept is the in-between marker for raw foodists and vegans – they like steamed kale but they also like raw kale salad. There’s a border that a lot of raw foodists won’t pass. Outside of that, my album is the curriculum for the students at the school that I teach at and my students did a song called “Brown Rice and Broccoli.” They did a video for it and from that concept I realized that not only are young people interested in health, they need the correct marketing. You know what it is – food and music is entertainment in itself. If you want to connect with somebody, you eat with them.

Word. Tell me about the curriculum you mentioned.

I teach my own curriculum. I am a contracted educator for universities. For charter schools that are looking for knowledge of self and a way to reach the kids. One way they use to get their test scores up is using healthy food in preparation for testing. The whole idea that they don’t want children to have type 2 diabetes in the school. It’s a mission. I’m really looking forward to seeing my curriculum utilized nationwide. It starts the conversation. It makes gardening cool. It makes growing food, eating raw foods and juicing cool. They’re digging it. They’re eating it up.

Food and education is one. I pump more than just food, I pump sustainability. My newest curriculum is more recycle, reduce, reuse, resourcing our food, lowering carbon emissions and oil production and consumption. Anybody that wants to work, I’m with it. If you want to do something, I’m with it. We got too many kids to save.

So, has this lifestyle been a part of you for as long as you can remember?

Growing, yes. My father likes taking care of the yard. My great-grandfather was the master gardener. And the whole concept around that comes from our roots. I think it’s something cellular in our DNA. And also from my Native American background, learning this land. I still feel foreign to it. It’s something I’ve been grasping on because I’m a black man living in America. My diet, historically, has consisted of tropical fruits. So, my mother, being the cool cat that she was, started the poetry venue, kept Hip Hop around my life, and now that’s thriving. She moved to Oakland but before she did that she helped found this greenhouse in Denver. I’m an original board member. We’re growing organic food, hydroponic food, aquaponic food and aeroponic food. Utilizing all natural resources in the tenth largest polluted community in the nation. Six mile radius before you can get something organic and the freshest food you can get is a lemon at a liquor store. It’s common sense that brothers and sisters want health and wellness. I was just very blessed to grow up with a mother who decided to get me off the pork rinds at around age 10. I’ve been a vegan since I was 14 years old. Been growing food most of my life. I planted my first apricot tree around 4 and now my kids are growing food. My wife grows food. We’re working on a cookbook. Food is medicine.

And what about the music?

I’ve been playing percussion since I was 5 years old as a congero and playing djembe.

How have people responded to the ideals within the music and curriculum? How has it been received?

Man, I’ll just break it down – I’m a tour DJ. I’ve DJ’d for Camp Lo, Questlove, One Be Lo. But, not only am I making music, I do concerts, speaking engagements, rocking Universities, schools, showing videos and the only people that get pissed off are the parents. My son came home and wanted to eat vegan. He won’t eat pork no more. My son won’t drink Kool-Aid what did you do to him? It’s the parents. I call that intergenerational tyranny. So, I created a community cypher. A juicing cypher. We invited breakdancers and deejays. We showed short films and juiced. The spot was called Roots, Beans and Greens. I ended up naming a song after it. I was running a ten year holistic Hip Hop festival. The concept around that was to grab the attention of the parents. So they feel comfortable and can trust what I’m teaching the students. The best thing about it was that it was creating this intergenerational dialogue. Parents remember having fruit juice without the extra sugar and all this extra stuff. Grandparents remember food without pesticides and meat without hormones. We can talk about and think about what we can produce together when we are a nation that provides intergenerational dialogue instead of now being this nation of consumers.

Everything we do is very intentive. We show them that raw is safe. And I’m pumping fresh water. The new concept of my next album definitely talks about water rights and privatization. You can’t control our food production and what we want to grow without healthy water – without natural gas and pesticides and all kind of other runoffs from local farms. I feel that we have to pump that wisdom and that love into people. And the only way to force love into people is by giving them food that they actually love. I’m that MC that will juice on stage. That’s how we do it. Boombox and a blender.

Can you give us a recipe that kind of embodies everything you’re talking about?

Yeah, man. You talk about things like the Vitamix, which we have and fully endorse, but a lot of people aren’t willing to spend that kind of money on kitchen equipment. They think being healthy is too expensive.

You gotta tell’em this is health care, homie. You gotta get in their face like Deebo and be like, “look here, cuz…let me tell you something, this right here will save your life.” I’ve been down with a lot of G’s. They don’t want arthritis in their trigger finger. They’re trying to run away from police, they ain’t trying to be fat. The Vitamix will keep them on their toes. I talk to real gangstas all the time about growing food for their hood, so they can look out for their hood. Tell’em to think about the price of cancer. As a matter of fact, my wife, who’s also my DJ and a holistic practitioner and professional raw food chef is hired out by Vitamix to do professional demos. The new book, Damn Near Raw, will be available at the Vitamix website. It’s gonna be education, recipes, gardening tips, all aspects of food and wellness around food.

I love how you’re actually taking the work into the community. There’s a lot of talk about work that needs to be done but you guys are active and are actually making moves within the communities that we work in.

The community is the people and the peole are the nation so it’s vital that the work is done in the community as well as nationally and internationally.

What’s next on the agenda?

The Eco Twerk album will be dropping next spring, 2015. We were nominated for the Grammy’s this year for the Educator of the Year Award. That was the big nomination for this year but the new album is the real focus. That along with the cook book and some other projects with some heavy hitters in the cooking industry as well as the music industry. As soon as we solidify all that we’ll be making announcements.

They say that within one man is an entire nation. What you say and do can influence and inspire multitudes. If that’s true, then the multiple avenues that these two individuals are taking to reach the people is a step in the right direction. Utilizing music, education, cooking, reaching out to audiences from Hip Hop youth the Oprah’s fan base, their work speaks for itself. I highly recommend you check out The Produce Section, if you haven’t already – it’s Hip Hop as curriculum. See what you can do to be a part of or be inspired by the work they’re doing by visiting their dot com, following on Twitter, Facebook, or streaming the projects just about anywhere else you can think of. They are definitely on a path that is both important and necessary…and we’re right there behind them.

We first met Qwel about 12 years ago. He was visiting his family in a nearby city and we…