Homeboy Sandman strikes again! Can’t say enough about this man. What with his on-point, to the point write-ups for the Huffington Post, to his comical anecdotes and oh yeah, dude makes some incredible music, too. In fact, today he dropped a new EP on Stones Throw Records called Kool Herc: Fertile Crescent. Ah yeah, been anxiously awaiting this one.

My instincts are telling me that it would be redundant to explain who Kool Herc is but better judgement and a little voice in the back of my head is saying Just tell the people who the man is. Well, I’ll put it like this – if you enjoy any aspect of Hip Hop culture you might wanna tip your hat to this dude. He’s widely regarded as the Founder, Father or Godfather of Hip Hop. As a DJ he invented a style of playing records that completely changed the game.

I could go on and on about the importance of Kool Herc and his contribution to the culture (and maybe I will at a later date) but today I just want to send him Birthday Blessings and talk about an EP that dropped today. In his way of paying homage to this important figure in Hip Hop’s history, Homeboy Sandman has released an 8-track record that bears the name of this musical originator. Sounds like a great birthday present to me.

Here’s one of the tracks off of the album…

The EP comes complete with cover art that is reminiscent of party flyers from the early years of Hip Hop. 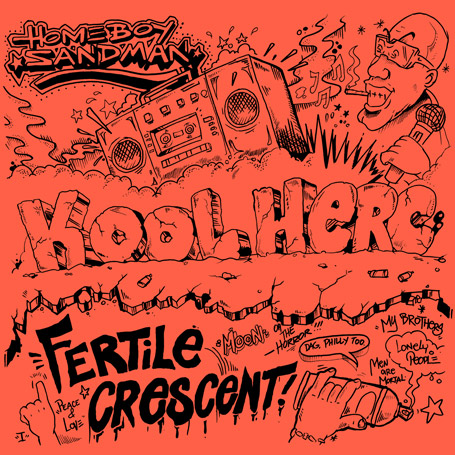 You can listen to samples of individual tracks from the EP and make the purchase here. One of the first things I did today was place an order for a vinyl copy of the album (which comes with an immediate digital download) and I highly suggest you do the same. You can’t go wrong on a Homeboy Sandman purchase. Not ready to write a review on it yet but if the samples are any indication…it’s what I expected – quality beats and rhymes. Also, make sure to check out the rest of his catalogue. You can thank me later.

If you’re digging the cover art and like old school flyers, you’re gonna wanna peep this…

That flyer collection is incredible!