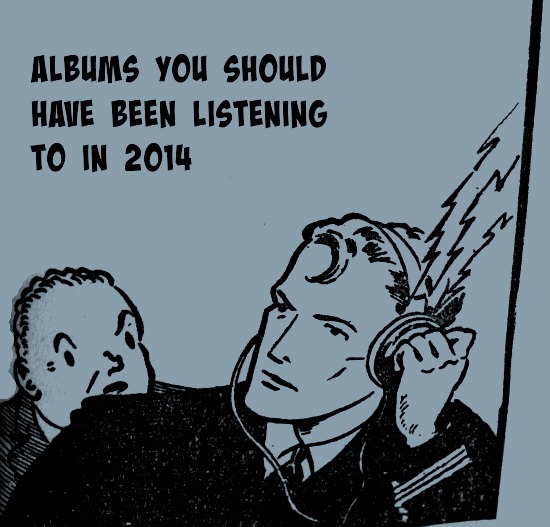 The best part, for me, about sharing my favorite music of the year is the fact that I get the opportunity to focus on something completely positive that puts a smile on my face. I’d hate to be the one writing a Time magazine “Year in Review” piece. No thanks. I’m not trying to have that kind of buzzkill energy around me during the holiday season (I got enough stress in my life, thanks). Sure, I do get passionate about issues that plague our society and will affect my kids. But right now…this is my time to reflect on the great music that we’ve been blessed with in 2014.

I didn’t limit myself to a set number of albums (nor did I fall in line and drop my top 14). These are just a collection of projects that I really enjoyed and hope you didn’t miss out on. They say that the new year is a time of renewal and a chance at a fresh start. Well, why not start the new year with some fresh sounds and a new playlist (or two) to be the backdrop as you attempt to attack yet another set of resolutions.

The following are only numbered to set them apart. I couldn’t even begin to rank these and offer you a number one, two or three. Also, I kept the words short, and tried to offer a video for the project when possible and a place for you to purchase these gems. Feel free to remind me of anything I left off. It’s been a great year for music. 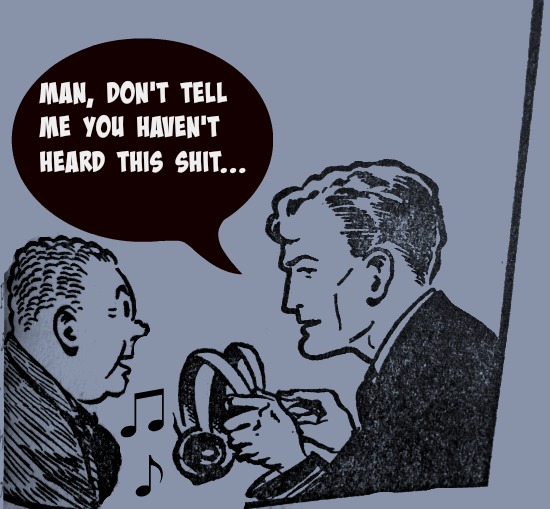 This album is some of his best work to date. And that’s saying a lot from a longtime fan. Anyone that knows me knows that Pharoahe Monch is my absolute favorite. This was a no brainer.
Get that HERE.

There were a few albums that just slid in at the last minute and just barely made the cut. I had been so busy, I almost didn’t hear this until the new year presented itself. Thank you Hip Hop gods for this one. DJ Premier and Royce both at the top of their game. The features are well placed with great additions, too (Common, Jay Electronica, Dwele, Killer Mike). This is that old boom bap that solidified my love for the genre so many years ago.
Real Hip Hop heads need to cop this HERE.

JS-1’s latest offering is jam packed with some of the best to pick up a mic. From the opening track with OC, you know you’re in for a real treat. Dude always brings together the best in the game so it’s no real surprise – although it is greatly appreciated – to hear Homeboy Sandman, Murs, Brother J, Erick Sermon, Sadat X, Artifacts, Craig G, and Breeze Brewin all on one project. What more could we expect from the Rock Steady Crew DJ but a collection of quality cuts, beats and rhyme features?
Get this album HERE

A day or two before this album dropped they had offered it as a free album stream and before I had made it completely through the entire thing, I knew this was making my end-of-the-year list. It doesn’t get much better than this. Tre and Nu-Mark both channeled their golden era selves and created something that is part Pharcyde feel and part J5 vibe.
Do yourself a favor buy this. Get it HERE.

After hearing the song up above, I immediately pre-ordered the limited red vinyl. And it has been on the platter more that it’s been off. More greatness from Printmatic.
Go buy this directly from him HERE.

This one had been out for months before I even realized I was sleeping on it. These dudes are always entertaining – bringing a nice balance of quality and quirkiness. Producer, Kno, has been impressing me for years and he just keeps getting better and better. Of the 3 Strange Journey Volumes, this is probably our favorite. Deacon and Natti are always a fresh tandem but everything’s turned up a notch with features from Del, Zumbi, Murs, Substantial, Masta Ace and J-Live.
Purchase HERE.

This was another last minute addition. Wow! This album is incredible. I’m a sucker for concept albums but add that to the fact that the storyline and features are all well fitted like puzzle pieces…this is easily one of Ghost’s best outputs. It doesn’t hurt that AZ and Pharoahe Monch both drop some heat either.
It’s a must and you can cop it HERE.

Boy Sands has not put out a project that I didn’t like. Anything he drops I’m all over. His last full length effort was so good that I didn’t really think he could top it. But I think he may have just done that this go around. The production lineup alone is worth mentioning. Everyone from my dudes 2 Hungry Bros, to DJ Spinna, Oh No, Jonwayne and J57. There are some dope features as well (see video above). No one is really dropping rhymes like Homeboy Sandman. It’s always unique and refreshing.
Buy it HERE.

If I was limiting myself to a set number of albums, this would be considered cheating. Kev has put out several REALLY good projects this year. I mean, yeah he put out another instrumental solo project but it’s his collaborative albums I’m most excited about. He got together with Raw Poetic and put out Concentrated Maneuvers. Dope.
Then he went and produced some freshness for Hassaan Mackey on a project called That Grit (see video above).
Before that he released Pillars with MindsOne.
All of those projects are exceptional and each of the MC’s shines nice on the mic, accompanying his production in their own unique way. But if you’re only wanting the Kev Brown instrumentals, those are included when you purchase the MindsOne and Hassan Mackey joints.
You can purchase these HERE.

Scarub is a favorite around here. We’ve been waiting for him to drop another full LP for some time now. He’s been generous with a few EP’s but it was well past time for another full length. And he did not disappoint. I won’t say much more because I’ve already reviewed the album but trust me…it’s good.
Please be sure to purchase this directly from him HERE.

This collaborative project between TKM favorite, PVD (drummer, producer, composer) and MC extraordinaire John Robinson is a true gem. It’s a complete musical project moreso than anything else on this list. Everything from the song writing, and instrumentation to the features and musical structure of the songs. If you purchase only one project from this list…well, it’d be a hard choice but trust me when I say that this is a really dope album.
You can buy it HERE.

If you want some cool-out Hip Hop that you can play for moms and use to accompany you on your daily commute to work and back then get this. I recently reviewed the album so, again, I won’t say too much here. Although, I will say that The Other Guys are on top of their game and Von Pea has never let me down. It’s a winning combo.
You can get this project HERE.

13. Wake Self – Good Things Happen To Those Who Wake

Wake always brings that positive, uplifting, music-is-my-weapon vibe to everything he touches. This kid is wise beyond his years. And he’s got the lyrics and chops that help set him apart from his peers. This is feel good Hip Hop at its finest.
You can buy this directly from him HERE. (It doesn’t hurt that he reps New Mexico to the fullest, either.)

The track above isn’t my favorite song off the album but it is my favorite video from the album. My brother-in-law put me on to this one. I almost overlooked it, good thing I didn’t. This is some of the best that I’ve heard from Aesop Rock since Labor Days. And Rob Sonic is no sidekick. These two mesh together better than anyone else they’ve collaborated with in the past. This is that workout, clean the house, road trip, bake a cake, bike ride music. It’s a winner!
You can buy it HERE.

15. Bop Alloy Another Day in the Life of…

I have a friend that only listens to rugged Hip Hop like M.O.P., Onyx, Sean Price and Guilty Simpson. He always says, “Man, all you listen to is that jazzy, feel good, save-the-world Hip Hop.” Not true (see #1,2,3,7 and 19). But…I do REALLY like this new Substantial and Marcus D album. Yeah, it’s jazzy and has that feel good vibe but it’s so much more than that. It’s the intangible nuances that make up the entire composition that makes this so good. And yo…what has Substantial lent verses to that hasn’t been incredible? Trust.
You can buy it HERE.

OK. The song above isn’t off Mystic’s latest LP but it was recorded at the same time that this project was coming out. This woman is incredible and has put together a superb album that I hope you don’t sleep on. Whether she’s rapping, singing, or waxing poetic, she’s making it sound effortless without lacking passion. I highly recommend this one. Highly.
Get that HERE.

17. Souls Of Mischief w/ Adrian Younge – There Is Only Now

Um. No brainer. Souls backed by the great Adrain Younge? Here are few good reasons for you to cop this one: 1. It’s a dope concept album 2. Narrated by Ali Shaheed Muhammed 3. Features Scarub, Busta Rhymes and Snoop 3. Produced by Adrian Younge 4. It’s the Souls of Mischief!!
You can cop that HERE.

Can’t believe I almost made it though this years-best-list without including a Mello Music Group release. Luckily, yU and Slimkat’s newest offering has been in my deck and in heavy rotation for the past few weeks. The production compliments the lyrics so well – or is it the lyrics that compliment the production? I’m not sure but who cares? This is impressive Hip Hop that I don’t mind recommending.
You can buy that HERE.

This is the best that I’ve ever heard form Cormega. I feel like he’s finally, truly come into his own. He’s always been nice on the mic but his musical maturity really shows on this one. I can’t say enough about this project. You’ll be impressed.
You can cop this right HERE.

Who’s end of the year list did this not make? Yet another last second addition. Just WOW! Prayers have been answered for a lot of you on this one. I didn’t really get into D’Angelo on the last go around. Sure, I appreciated what he was doing I was just on some other shit. But with this one right here? Woo! It’s in-cred-ible! That is all.
Get it HERE.

21. Hawk House – A Handshake to the Brain

Hawk House’s new EP was exactly what I was hoping it would be. Coming off the heels of A Little More Elbow Room the bar had been set pretty high by these three UK rhymers. I have been recommending this to anyone that’ll listen. These kids are all style and they’re not afraid to experiment.
Buy the EP HERE.

So much good music came out this year. I almost want to do a Good Music 2014 Part II just because there was so much that we loved and listened to over the past 365 days. Happy New Year everyone! Here’s to twice as much as we were blessed with in 2014. Cheers!

In Hip Hop there are single words and short phrases that have become mantras: Word is an affirmation, Peace…