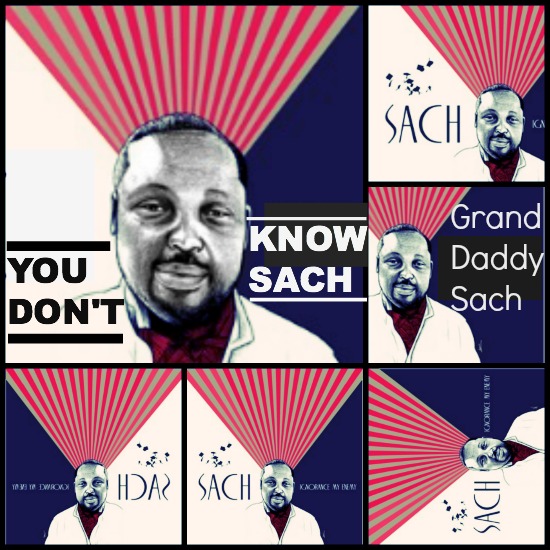 Have you ever been stingy with music? Kept something to yourself because you didn’t want busters to get their hands on it? I have. Mostly because I came up in the era before internet when you had to find all the dope shit on your own. If you knew what was up and could share a gem with me, I was more than willing to share my knowledge with you. On the other hand, if you kept coming around looking for musical handouts, most likely you were only getting access to stuff that was easily available.

I guess in a way this is a sort of public apology. See, for a long time I wasn’t sharing anything The Nonce or Sach (a.k.a. Nouka Basetype) with people that didn’t already know. That was/is the illest shit out and I wasn’t into sharing it (like those secret digging spots that good record collectors know about). Which kinda sucks for Sach because I easily could have turned a large number of people on to what he was creating with and without Yusef Afloat (the other member of The Nonce who has since passed. Rest in power). When I was doing college radio and making mix tapes, it would have been no thing to really spread the word on this goodness.

Well, now that any music you could possibly want is at your fingertips, I guess I can finally let it be known that Sach & The Nonce have put out some of the best Hip Hop that you might not have ever heard. You may recall, actually, that I’ve already shared my thoughts on Sach. I only bring it up again because I recently sat down and talked with this MC (and producer) that used to sell mix tapes.

In the past month Sach has released a slew of old and new tracks. Pick one to stream as you read into our conversation.

TKM: First of all, man, what have you been up to?

TKM: Yeah, I can tell. You’ve been grinding stuff out lately.

S: What I did – on my birthday, I put a post on my Facebook that said, “send me some beats for my birthday.” So all day people were sending me beats to my email. That was one of my best birthdays ever. I was feeling so creative. Also, I had just got my Tascam (recorder) – I’ve always been chained to inside when doing vocals. But I’ve always wanted to go out somewhere and record. I’ve always liked to experiment. You know, you can record without the best equipment. It’s all about technique. With digital programs like ProTools, you gotta upgrade or something happens to the computer, but with this I can use it ’til the wheels fall off. I got this battery operated hand held and I can just record anywhere. I love doing stuff like that. Just making good music.

S: Yeah, we’re putting World Ultimate out on double wax. One with bonus material and instrumentals. Then, Seven Days To Engineer. But I really wanna get to the newer stuff. I had all this material (that I just put out) and nobody had heard it except for my family. Nobody had a copy floating around or nothing, it was just sitting here. And with Sassette, I just moved back to Los Angeles and got back all my old tapes. I really wanted to do something with them. And at the same time I had all this vinyl that my dad had left to me. It’s a collection of records, 5 crates at least. You know, when I was young I used to abuse records. Not put the sleeves on and just have a stack of 30 records sitting there. I don’t do that anymore. But, now I got all those records replaced. Now I’m looking at these records and I’m like, “dang, I dogged this record.” I wanted to do something with the vinyl but something told me to use the cassettes first. So, all of the beats and samples for that project are from these cassettes. I’ll use the vinyl next. But I got more tapes to trip off of. I got cassettes of me talking when I was six – telling jokes and all kinds of stuff. So that and then I got some great projects coming together with Name Science.

TKM: What were you doing before you moved back to L.A.?

S: I was making a ton of beats and just recording. I recorded a few other albums that I haven’t put out yet. I have two modes of writing. One just because I wanna write and the other one comes through me. It was my hand but it’s like something takes over. And songs that come out like that, I can never remember writing them. Like Black Earth. That was the first one. I was very young with The Nonce stuff. I didn’t know anything. I think through reading – I developed the love of reading books and I think that opened my mind and gave me another way to express myself. It changed. If you were to listen to the old stuff and then listen to the new stuff, you could hear it. My partner, he had already changed while we were in The Nonce. It’s like going from adolescent to adult in writing. I just matured later. I was a late bloomer but I actually changed. I feel like I’ve had several lives in Hip Hop. Some people only know me as Nouka and some people only know me from Phlowtations and some people only know Sachillpages. When I say that the writing comes through me – I’m acknowledging that gift. A lot of times people don’t wanna say that they have a gift. But I’m amazed by it all the time. I just wanna keep using it like muscle power. When you have something like that, you just gotta feed it. So if I’m not writing I’m reading. If I’m not reading, I’m painting. If I’m not painting, I’m still creating something.

TKM: What is it that gives you that inspiration? Would you say it’s akin to a spiritual process?

S: Well, I think reading certain things. Also, trying to meditate, make my mind stronger. I think it is, though because I totally know that it’s not me. It’s coming through me. Like, how can you be amazed about something you did yourself? Kinda like when you look at a painting and it’s supposed to be one thing but you see other stuff because of the way the paint dried or the brush strokes or whatever. That’s what it’s like. I like having a connection to something bigger than myself. When those songs like Black Earth and Life Gives – all of those that I think came to me like that, people come up to me all the time and say, “man, that song saved my life.” When you record in a microphone I believe that it doesn’t just pick up your voice but also your vibe. When I recorded Life Gives I tried to visualize everything that I was saying really hard. That was the first time I did that and that’s when I started getting that kind of feedback. I call it – for lack of a better term, an impression. That’s mostly what my rhyme style consists of, these impressions.

TKM: What roll do you think food plays in the creation of your music?

S: When I record, that’s the reward at the end. I don’t have any kind of appetite until it’s completed. Then I wanna dine. So, I guess it’s in the back of my mind. The meal, the payoff reward.

TKM: What do you like to cook? Do you have a recipe that you could share with us?

Method
Sautee chicken in skillet with chopped onions. Once chicken is cooked, shred it in skillet.
Add some of the sauce to taste adding green pepper and diced tomatoes.
Lightly fry shells on one side using olive oil, stack to the side.
Spay muffin pan, regular or giant size.
Add table spoon of enchilada sauce at the bottom of each muffin cup, then place a shell in each muffin. Fill with meat adding cheese on top of the meat then close the shell and top with a little sauce to make the shell behave.
Bake for 20-30 min
Cover with cheese green onions and chopped black olives(optional)
Bake 5 min or until cheese melts
Then serve with a dollop of sour cream.
Enjoy.

TKM: That’s getting made for sure. Do you guys grow any of your own stuff?

S: We have a little garden on the steps. Cherry tomatoes, I got some swiss chard, strawberries, some Japanese eggplant, all this stuff. Right down the street from me, every Friday there’s a Farmer’s Market. We’ll go down there and as long as you purchase something there you get a free plant. That’s how we started our garden. It was from just going down the street to the Farmer’s Market. I really like going to those. I get regular stuff from the grocery stores but I love organic food. I want to treat my family to quality food.

Sach is like a stereograph – one of those 3D images you can try to find within a 2D image. You could look at him and be like, “That’s that dude from The Nonce that put out that song Mix Tapes. That song is dope!” But if you look – or listen long enough, you’ll see that there’s a whole lot more going on with this guy. His unique production captures the vibe of underground L.A. That lo-fi jazzy experimental sound that he chops and splices together is exactly the type of thing that makes me say, “I can feel this.” The laidback delivery of his rhymes are oftentimes so effortless that it’s almost like him having a conversation in your headphones. This is some of my favorite music of any genre. Dude has been busy like the NSA. There are plenty of new/old projects that you can check out on his bandcamp page. If you’re in the L.A. area, lookout for shows that he’s performing at as Name Science with Inoe 1 (from Global Phlowtations). Stay up on all upcoming projects, shows, rereleases and everything else by following him on Facebook. And if you’re wanting to learn a bit more about his back catalogue, check HERE. Keep listening, always good music. Always.