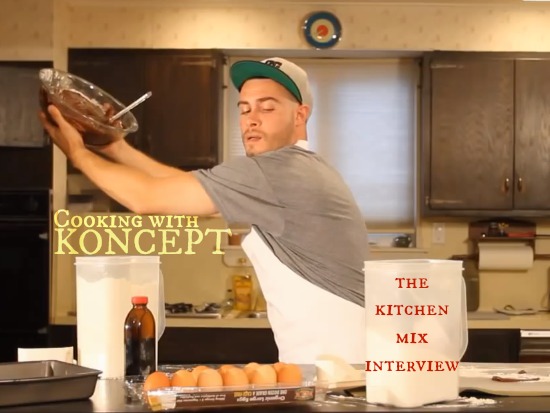 Compliments can be interesting. I imagine, at some point in your life, you’ve received a compliment and you weren’t quite sure how to take it. We’ve interviewed quite a few artists over the past few years. The first artist featured here was Homeboy Sandman. When we were explaining the idea behind the site his response was, “it’s a dope concept.” Thanks…I think. For some reason I wasn’t quite sure how to take that. Since then, that has been the most common compliment we’ve gotten from artists. I realize now, it just means that…dope concept.

I’mma do you one better. Today I’m gonna take our original concept and add a Koncept. You’re familiar with the Brown Bag Allstars right? If not, 15 minutes from now you’ll probably be downloading one or more of their projects. What you do need to know, for now, is that the Koncept for today happens to be one of the MC’s from the aforementioned collective…and dude comes with it, please believe.

A few years before the inaugural launch of TKM, I was listening to a Koncept track – any mention of food in music always catches my ear. I came across this track of his that kinda spoke to the concept of what we had in mind for a site whose theme was “higher vibrations through food and music.” It was these lyrics in particular:

“Stop eating Wendy’s. Need to go home and cook more
nutritionistic values should be in your decisions
get into that kitchen, put green on your dishes
see, it’s wishful thinking but hopin’ this will meet ya
guess it’s hard to fix with those dollar slices of pizza”

After that it was kind of a given that he’d have to be a feature on TKM at some point. Well, here it is. We caught up with the New York native and doled out the questions while he served up the responses. Really, an interesting Koncept…

K: I use the same professionalism in my music as I do in eating tacos.

K: I try to gravitate towards healthy foods like salad, and avoid bacon cheeseburgers with guacamole & pico de gallo, but it always seems to go the opposite way.

TKM: Have you traveled outside the country much? What would you say are the biggest differences in food culture here compared to those countries?

K: I have, and I would say that the UK needs to start using salt & pepper. I still love you, though.

TKM: How does touring affect the lifestyle you’re trying to maintain?

K: Eating healthy (or even quality in general) on the road can be very difficult. Especially when you’re doing it in a van across countries. Gas stations and rest-stops don’t always have the best food.

However, Switzerland gave me the best food, hands down, I’ve ever had while on tour. I’d even say top 5 meals of all time.

K: My mother-in-law cause she makes the illest Salvadorian food around.
I’d like to make a birthday meal for my pops. RIP.

K: If I told you my cheesesteak technique I’d have to stab you in the left foot.

TKM: Who would you say is the best chef out of BBAS?

TKM: What’s on the horizon for you? Any upcoming projects to look forward to?

K: From everything. From my life, to your life, to the tacos and cheesesteaks I eat, to my bank account. A lot on my bank account. I want to buy a helicopter very soon.
I also want to eat filet mignon on a daily basis.

While we wait for that new joint, “Flight”, to take off let’s make sure to (re)visit his older projects which can be found, along with everything else, HERE. That’s your best bet for everything Koncept but you can also stay up to speed by following my dude on your choice of social media…

In the meantime, I’ll do my best to give the other members of Brown Bag Allstars a chance to confirm, deny or retort to the food choices that Koncept labeled them with. This should get interesting. Keep it locked. The dope concept continues…

I am a fan of the mash-ups…when they’re done right. And Bizarre Tribe is proper!  Everybody has a soft…