“You need to know
business before you talk business
You need to eat right, man
and step up your fitness”

Anticipating the release of a project can sometimes be a bad thing. Especially if, say, you want to review said project. If expectations aren’t met, you’re disappointment is exponentially beyond what it would have been if you had simply taken the project at face value. I’m relieved that wasn’t the case with the album I’m reviewing today. Two lines from the same Outkast song come to mind.

1. “kinda sour cause my favorite group ain’t comin with it” – Not the case here. I hate when that happens. And believe it or not, it happens more often than not.

2. “baby boy you only funky as your last cut
You focus on the past your ass’ll be a has what
That’s one to live by or either that’s one to die to”

Unfortunately, new albums by familiar artists are often scrutinized and measured against previous releases. It’s really an unfair expectation we hold artists to and the reason that albums like Beats, Rhymes and Life received such poor reviews. People half-stepped to this album because they were wanting another Low End Theory. If taken by itself, if it had been a freshman release from an up-and-coming group it would have been met with rave reviews. But, because we wanted Midnight Marauders II, it fell short of our expectations. 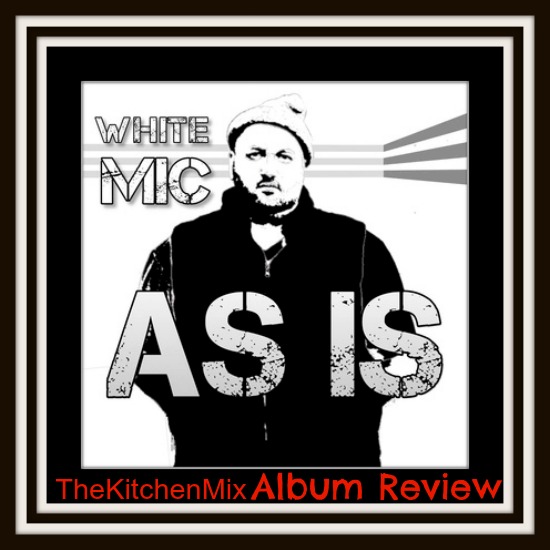 So, with that said…I had to try to put White Mic’s Fightin Off Success, The Neighborhood Visitor, Armchair Militia, and all of Bored Stiff‘s releases in the back of my mind as I took in his new album, As Is.

You may remember that, not too long ago, we caught up with White Mic and had a little conversation about food and music. I encourage you to go back and check out some of the releases that I focused on in that write-up. But maybe do that after you take in this review and stream As Is and make your own judgement (remember – headphones make the man).

I started to go through a play-by-play of this project and break it all down for you but, damn, there are 17 tracks and you probably still gotta get to dinner. So, here’s what you need to know:

•Mic loves movie and interview samples and uses them often throughout his project and his catalogue at large. If you’re familiar with his past projects, then you already know what to expect when it comes to intros, outros, and in-betweeners. Doesn’t help, hinder or make much of an impact either way. Just little snippets over some dope beats.

•Lots of respect and dedication for those that have helped him along the way (Bored Stiff Members, Sick YG, 3 Shades of Rhythm, etc.) For more on that, check “Lower Level.” I can get down with that. If you’re familiar with Bay Area Hip Hop, it’s kinda cool to follow along like an audible Goole Earth.

•The guest spots are on point! Everyone that was offered some air space on this one, stepped up to the mic and delivered nicely. Case in point – “Wow!” featuring Scarub, Pep Love and Equipto. One of my favorite tracks of the year so far (yeah, I know it’s still January but still). And yo, don’t sleep on the joint with Fatlip (from Pharcyde). ZMan does his thing, Lroneous is fresh as always, fellow Bored Stiff members and other Bay Area favorites all bring more flavor to the feast. Sometimes guest verses try to outshine the name on the album cover. Not here. Everyone just adds their piece to the puzzle and it all fits together like a photo collage.

•The beats and production complement the vocals lovely. One doesn’t outshine the other. It’s that Bored Stiff, clean, four-track feel that keeps headphones covering my ears for longer periods at a time. I wish more of my favorite MC’s would continue to rock over production like this, rather than alotta that over-produced digital, trying-to-sound-like-the-moment music that’s become common place.

•Dude always has something to say. I was talking to a young teenager the other day and she was saying since she was getting older people should treat her more like an adult. I had to tell her that age doesn’t equal maturity, it’s actions. Hip Hop is getting older. We can’t still be talking about the same things we were talking about 20+ years ago. My man has matured and he’s talking to us like the grown man that he is. His words speak to where I’m at – where my Hip Hop contemporaries are at. We’re parents, we love Hip Hop but we’re grown people doing grown people shit. He raps that mature grown-man-hustle style that says something, even if he’s gotta put someone in their place along the way. “The young minds counting on me/ the OG’s gotta show how it’s supposed to be”

This project is solid. It’s getting that KitchenMix seal of approval. Go ahead and grab your digital copy (pay what you want) and then head over to Access Hip Hop and grab the physical when it drops (1/28). While most of your favorite groups aren’t comin’ with it anymore, all of the Bored Stiff members and Solidarity Records artists still are. Support quality independent Hip Hop. Cop that!

Goes well with – a craft beer, headphones (or surround speakers) and greens…or “As Is”

Native Americans subscribe to a principle known as The Seventh Generation philosophy. Many of our societal problems most likely…