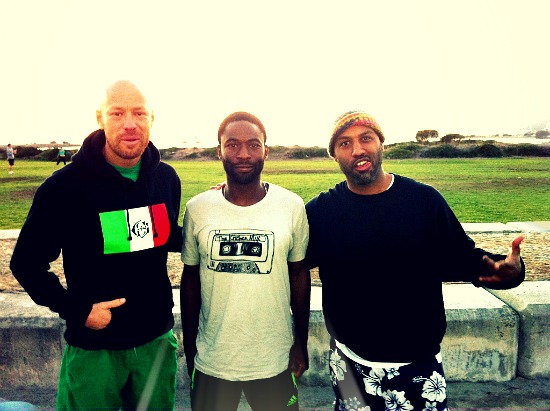 Sometimes it’s hard to recognize the everyday miracles and inspirations – even though they’re right in front of our faces. Aspirations that drive and dictate our focus tend to keep us looking past all the steps keeping us on our path. In other words, we’re so focused on the end result that we miss the most important stuff along the way.

Next month will be the two year anniversary of an idea come to life called The Kitchen Mix. You know, in the beginning it was a bunch of “we should”s, more ideas than actions. Then, later, when the action started to build momentum it became more like, “we’re gonna.” And as the jingle turned into an overture, the goals became loftier and inspirational oversights became commonplace. When growth and readership lulls occurred, frustration had us overlooking some of the miracles that were happening along the way.

It’s important to stop, look around and recognize all of the greatness and details of our journey so far. Like, the Great Pyramid in Giza, it’s amazing in itself but think about the miracle of each of the 2.5 ton blocks that were created and fitted and layered to create the end result. There’s so much to be said about each stone. Well, we’ve had many miraculous stones that have been fitted into building us up to where we are today.

This site started out as a place to share good music, recipes and other things that we are in to. But once we gave it life, it took on it’s own identity. It has become a dialogue with artists, writers, producers, A&R’s, musicians, MC’s and friends. We have developed so many friendships along the way.

The other day I was talking to one of my favorite MC’s and producers, Sach from The Nonce (miracle in itself in many ways). As we were wrapping up the conversation, he hit me with this:

You had done a little feature on me awhile ago and somebody had sent it to me like, “you need to look at this.” And it was at a time I wasn’t feeling too great. It was a hell of a pump up. It was like, so – seeing all my records, the segue into it, it was beautiful, man. I just wanted to say thank you for that. It really made me – I wasn’t feeling great, I was kinda down and things was happening and that shit was definitely a pump up. So, thank you for that.

I love that fact that somebody read that post, sent it to Sach and he was able to find inspiration in it. Are you starting to understand what I’m getting at? These are the everyday wonders that I need to constantly focus on.

When I talked to one of Hip Hop’s all-time greats, Masta Ace, he mentioned that what we were doing with the site was important and that he appreciated it. He was under no obligation to say something like that. It’s kind words and affirmations like that driving me now. Then, just to up it a notch, that post was featured on Ego Trip’s front page. That’s great exposure. That’s inspiration.

I’m a music head. I’ve been spending large portions of my income on music and music related stuff since I was 12 years old. Since the inception of this site, I’ve received so much great, free music. I didn’t ask for it. Artists from around the country, and even across the Atlantic, have given me music. How incredible is that? I would have purchased their music on my own but now it’s being gifted to me. Miracle.

We have made some great friends on account of meeting and eating with people, since this all began. Some of my favorite artists have sat down at our table and shared a meal with us. These are people I was only a fan of, now calling me friend. We’ve been invited to the homes of these new friends, taken day trips with these friends, been invited backstage at festivals with these friends, been put on guest lists by these friends. This is the inspiration to keep me going.

All of the sweetness in life wouldn’t be so sweet with out the sour. I acknowledge that. However, I’m going to make more of an effort to focus on the sweet and less on the sour. There are so many phenomenal moments that often go unrecognized or who’s importance isn’t as valued right away. That’s going to change. From here out, my engine will be running on these little miracles.

Up above is a picture our friend Scarub (of Living Legends) sent me the other day. We were on a fan/artist basis a year ago. And now this. It was just a random text for no reason just to share the picture of himself (wearing a Kitchen Mix shirt), The Grouch and Bicasso hanging out together. Do you see my inspiration?

With all that said, we do still have our sights set on bigger things for this site. And we need your help. I mean, we’ve had your help – by the way, thanks for all of the positive emails, feedback, phone calls, shares, likes, retweets and other inspirational lifts you’ve given us along the they. They do not go unnoticed. However, you probably have friends that don’t know about us yet. We have a bunch of giveaways that we’d like to get to you. All we’re asking you to do is share at least 3 of our posts on either Facebook or Twitter, let us know about it and we’ll send you a free gift (while supplies last, see below for more information). Thanks for sharing this journey with us and please continue to be a part of what we’re doing.

**We have CD’s, shirts, children’s books, mixes and other goodies to giveaway. Shirts are for locals only (PHX) and can be hand delivered (right now we’re down to only L and XL). Gifts will be picked at random (except the kids books). If you share at least 3 of our posts, let us know if you have kids and we’ll get you a book. Though we appreciate the support from our friends worldwide, this offer is only good for readers within the continental United States.

Once upon a time, people were in tune with celestial cycles and patterns. Having grown up in a place…