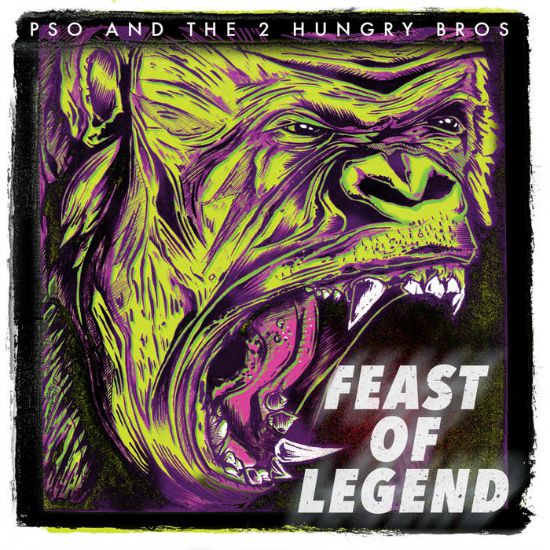 Consistency. That’s what I’m looking for in the artists I gravitate towards. No, I don’t mean each project has to sound the same. You can switch up styles on each project – as long as the quality is staying consistent. Lucky for me, I tend to gravitate toward all things Hipnott and 2 HB. Hipnott Records has been ridiculously consistent as of late. With recent releases from Substantial, Von Pea, and The Other Guys – each project has been at or above the level of greatness you’re getting from whatever artists pop into your mind at the moment. No filler here. And 2 Hungry Bros? Forget it. This is their year and they’re not sitting around letting you get comfortable with a style. They’re on a mission to serve up as many styles as you can stomach. And my appetite’s just getting bigger.

But the man of the hour is P.So. This is his hour. And he’s here to take what’s rightfully his. In case you forgot, dude can rap. He, in conjunction with the 2 Hungry Bros and Hipnott Records, have put together a little helping of tasty treats in the form of a new EP. And here’s our review…

Headphone Diaries is one of my favorite singles of the year thus far. The hardest thing about crafting a track this damn solid is that it makes it hard for the rest of the EP to keep up with that level of dopeness. “Transform into a monster like Altered Beast” That’s exactly what P.So did over this massive track. And I almost feel like that was the inspiration behind the production. Makes me wonder what the character on Altered Beast could have done with this as his theme music. There’s an element of the track that reminds me of that Daddy Rich and Pete Nice produced 90’s cut, I’m Kurious. 2 Hungry Bros really went and cooked up something special with this little heater. They’re gonna make some new fans off the strength of this one. P.So keeps it interesting with the verses, taking us along as one thought makes way to the next while Stevie Wonder, Jimmi Hendrix, and Marvin Gaye play through his headphones. Fresh concept!

Coming off of an opening track as thick and polished as Headphone Diaries, it’s kinda hard to follow up. Especially when your neck and body were already moving without your brain sending that command. Luckily, Gamma Rap keeps that energy and attitude on the same plane. More headnodding exercises. In fact, this one might be a good one to take with you on your next workout – and not just because he’s talking about being in the gym doing dips and burpees. I don’t think I’ve heard P.So drop bars over a track the way he’s doing here. My only regret with this one is that it ends just after the 2 minute mark and could have used another verse or two.

The third track on the EP, Dali/Black Unicorn is my least favorite. I don’t mind the production or even P.So’s lyrics (sidenote: he does come off sounding a bit like Blueprint, and that’s not a bad thing). I think it’s the two features that lead the song astray. Features should add value to a project but that’s not quite the case here. I don’t mind Likwuid’s hook “I don’t do drugs, I am drugs”…it’s everything else she does on the track. I mean, she does drop a nice verse and if she was the only MC on this track I’d feel differently about it. It just feels misplaced here. On the other hand, Kevo, the other featured guest, seems all wrong for this track. For his part, P.So keeps himself in check with a strong showing on a track featuring 2 other rappers – one should never be outdone by his guests.

Everything gets back on track with Alley Oop. This one could have dropped anytime between 97 and now and we’d all be just as pleased with it. Meaning, it draws from the feel of that era but still manages to bring in something that sounds like now. The way it opens up I’m almost ready to hear Homeboy Sandman get busy over the production but then the beat drops and I realize this is P.So’s beat. He owns it. Shout out 2HB for the alley oop.

Go Nuts is good but not as great as I was hoping it would be. I like the production for sure. But Tanya Morgan, who I always expect great things from, don’t quite attack the track with the same level of hunger that you get on their own albums. They do make P.So sound good, though. When TKM favorite, Substantial, finally chimes in it’s lyrically what you’d expect. But still. It’s P.so that’s truly shining the brightest. And why not, it is his album.

The project wraps up with Fire In The Hole. It’s a chaotic track but you can’t deny that breakbeat. By 2 Hungry Bros standards it’s a lot choppier and not as thick as what we’re used to. But just like their project with Doc Reevez earlier this year, I think it’s more about experimenting with new styles for these dudes, at this point. Don’t get lost in the organized confusion of the production, otherwise you’re bound to miss some great lyrical moments. Sometimes an MC and his production team can just wyl out for three and a half minutes and all you can do is sit back like damn, I wasn’t expecting that. But thank you.

Here’s hoping for a full LP from these three. Head over to the Hipnott Records site to purchase your copy. Tell’em The Kitchen Mix sent ya.

Ratings are based on a 1-10 scale. 10 being so good it'd make a vegan eat meat. Whereas a 1 would would signal a career change in the very near future.

As a kid I was really into sports. I collected cards, lived for the highlights and could rattle off…