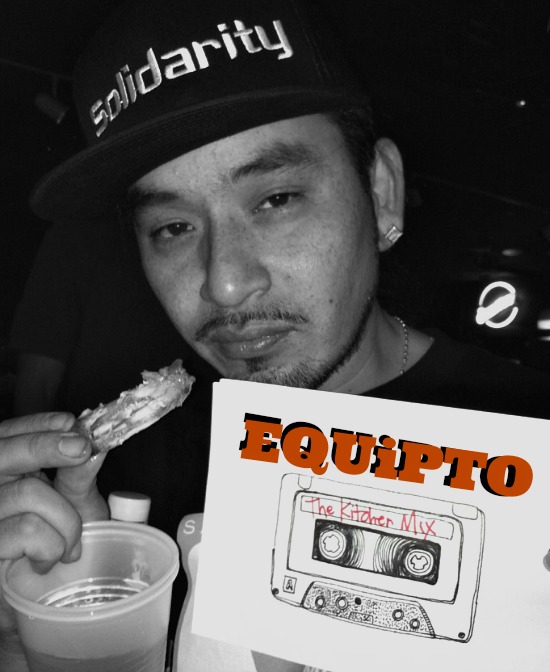 Check out and feel free to download this amazing collection of early 90’s tracks that he recorded while with the group 3 Shades of Rhythm (who would later become part of Bored Stiff).

Dude has worked with just about all of my favorites but his most frequent collaborator is probably Andre Nickatina. Lemme bless you with this one before we get into the food talk…

Equipto recently retired from the rap game and to celebrate this momentous occasion he set off on an impressive tour accompanied by some of the best that the West has to offer. We caught up with him during this tour to talk food, music and more. I hope you were able to make it out for his final tour but if not, do yourself a favor and go check out his back catalogue of works. You’re guaranteed to find something you can’t live without. His range of subject matter is quite impressive. I mean, he’s got his smoker’s anthems but he covers myriad of subjects throughout the projects he’s worked on – everything from kids are the future, women should be respected, state of the union, dear mama, respect for the old school, and current affair issues. So, let’s get into some of the conversation we had with this Bay Area legend.

TKM: Equipto, you’ve been creating music for over 20 years, how would you say that food relates to the creation of your music?

EQUIPTO: It means a lot. I can’t work on a empty stomach. Unless the song is about having an empty stomach. There should be somethin’ to munch on at all times in the lab.

TKM: Yeah, we’re all about having something on hand to munch. You’re on this Stress Free Tour right now hitting up some great cities. I mean, throughout your career you’ve been to hella cities, what would you say are the best cities for food?

EQUIPTO: I like Portland for their street food trucks. LA is coo too. Hit Roscoe’s Chicken & Waffles, of course. But see, I’m from an area of the world where some of the best restaurants & chefs are at. San Francisco. Great burritos, seafood, Peruvian, Thai, Brazilian, Italian. We got a lot to choose from. So, basically I always crave coming home to eat when I’m on the road.

TKM: I feel that. Home is where it’s at. Yeah, I’ve heard good stuff about what Portland has to offer. And San Fran’s rep is second to none. Do you get down in the kitchen? If so, what are your specialties?

EQUIPTO: Not at all.. Haha. I can make a mean bowl of cereal tho. Nah, but I can make myself breakfast when I need to…

TKM: Hey, I could eat breakfast at any time of day. If you could have anyone make you a meal who would it be? What would you have them make?

EQUIPTO: It would probably be Barefoot Tessa. Only cus I used to watch her show a lot & I liked her style of cooking etc. but I know some incredible chefs myself. I would probably have them make me a fruit salad. Angel hair Spaghetti with small clams in white wine sauce.
Some garlic asparagus.. I can go on. Haha

TKM: Damn, that sounds good. I know you said you don’t really get down in the kitchen but if you could make a meal for anyone who would it be?

EQUIPTO: I’d like to try to cook for my mother some day.

TKM: You should. I’m sure she’d like that. Maybe just hook up something easy. What are essential grocery items in your house?

EQUIPTO: Yea. The meat seems to be better than the meat in certain areas of Europe. I had the best soul food in Amsterdam, in the cuts, at an underground restaurant. Might have been the best meal I’ve ever had. No joke.

TKM: Damn. That’s interesting. Can you share a recipe that we can make and share with our readers?

TKM: Haha! Alright, I’mma do that. I know that out in the Bay Area, there are lots of organizations that are popping up with the goal of spreading nutrition information to the neighborhoods that are hit the hardest with poverty. Thoughts, feelings, first-hand experiences, suggestions?

EQUIPTO: Yea. There’s a few organizations that are doing that. It’s just hard cus everything they promote as good for you ends up being a lil more expensive & harder for folks wit a lower income to afford. I suggest eat what you want in moderation.

TKM: Which member of Bored Stiff is the best cook?

EQUIPTO: Probably White Mic. But I know Mint Rocky can fry a coo salmon or whatnot.

TKM: Nice. Alright, last question. True or False: You are what you eat?

EQUIPTO: In a sense I say yes. Or maybe the term “you are how you eat” is more appropriate.

TKM: Agreed. Thanks for your time. We appreciate it. And congratulations on your retirement…but we’re still looking forward to some new Bored Stiff material. Peace.

Be sure to check out Equipto’s amazing catalogue of music and if you’re not sure where to start, the Vintage Collection or any Bored Stiff album would be a guaranteed good start. Yo, be sure to follow Qweezy on all of your favorite social media sites and find yourself one of his projects here. Even though he’s Calling It Quits, we look forward to supporting whatever projects he decides to work on in the future…and so should you.