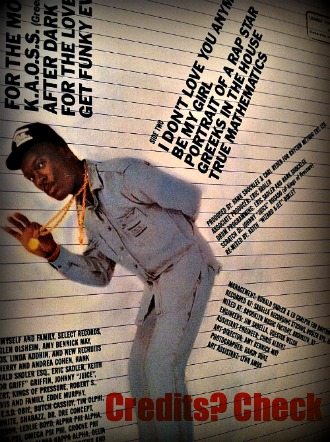 “We craft gems
so systematically inclined
to pen lines
without sayin’ a producer’s name
all over the track
Yeah, I said it
What you need to do is get back
to reading credits…” -Pos (De La Soul)

I love, love, love discovering new music. I love finding that next new track that’s added to my life’s score.  I’m like my own Ed McMahon, star searchin’ for that next artist to put on the pantheon of my life’s blendtape-slash-soundtrack.   It’s gotten exponentially easy to do since I began my pursuit many years ago.  Nowadays anyone with a computer and an internet link can access the same gems I was painstakingly unearthing as a kid.

EVERY single Hip Hop head that I’ve ever met that came up in my era knows about the treasure maps that are credits and liner notes.  I mean, we had magazines that could guide us on our hunt, but the real instructions were in the liner notes of cassettes, records and CD’s.  We poured over these until we KNEW the studios, producers, record labels, crews, engineers and management of the artists we were listening to.  Lookin’ for clues. “I’ve seen this dude’s name on so-and-so’s album”. “Damn, this was recorded and mixed by the same dude that executive produced (insert artist)”.  Man. We thought we made the connection to the missing link when drawing some of those parallels.  If you saw a name coming out on at least two shout out sections…you knew you could expect to see that guy coming out with an album real soon.

I learned geography in album liner notes. I could tell you all about what cities had the hottest recording studios. I learned about major cities and their burroughs, area codes and state abbreviations. The single biggest contribution to my reading fluency definitely came in the countless hours I spent reading liner notes and credits (and probably packaging for G.I. Joe’s…but that’s another entry).

Today, you can YouTube a song or Google an artist to access the same information or find the music you want.  Today, you download the individual tracks you want and maybe discover 5 new artists you never heard of prior to that search.  But what’s missing? When you download from iTunes do you get the liner notes and production credits? When you download that new hot Johnny-come-lately track, do you get the info behind the track (ok, well you usually know the producer…can’t miss it when they’re shouting it over the beat).

The extra credit is in finding the clues in the credits.  I can’t help it.  I read credits and liner notes on every musical purchase I make, to this day.

Alright, here’s an example of what I’m talking about:  I’m constantly digging for those 80’s and early 90’s joints that I somehow missed or need to repurchase on vinyl.  A month or so ago I came across this album that grabbed my attention. “True Mathematics Greatest Hits” in bold red lettering that covers the entire front cover, save for a picture of a Charlie-Murphy-lookin’-ass dude. First reaction – flip to the back and look for something that’ s gonna get me to make this purchase. I mean, for $3.99 it’s worth the picture of pseudo-Charlie on the front.  Flip. Scan. Bam!

…Fred Munao, Richard “Professor Griff” Griffin, Mr. Magic & Staff, Red Alert, Dr. Dre Concept, Chuck Chillout…Eddie Murphy…CHARLIE MURPHY???????
Wait. What? Charlie Murphy? Eddie Murphy? Hold up. IS that Charlie Murphy on the front and back cover? Purchase, get home and try and get an answer for that one.

Meanwhile, here’s the breakdown:
Hank Shocklee, Eric Sadler, Keith Boxley, and DJ Johnny Juice were all a part of or played a part in The Bomb Squad. These guys were the production team behind some great albums by Public Enemy, Slick Rick and Ice Cube’s lone East Coast sounding album.
Select Records. I recognize that logo anywhere. I remember seeing that on the back of Chubb Rock records and the UTFO “Roxanne, Roxanne” single.
1988. One of the best years for Hip Hop. Fact. 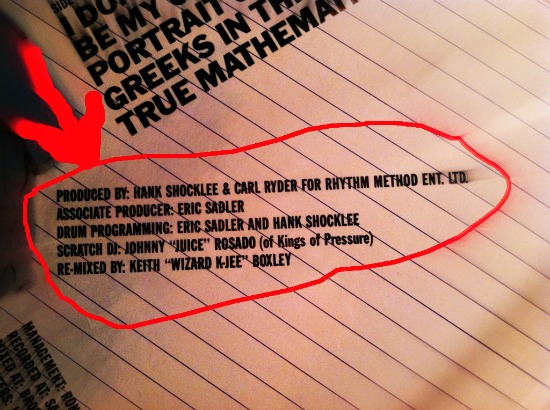 I mean, it goes on and on.  The Special Thanks section mentions Dr. Dre Concept who is the same Dr. Dre I grew up watching religiously on Yo! MTV Raps.  He was the DJ for a group called Original Concept, even did a stint as the Beastie Boys’ DJ.
In the month or so since my purchase of “True Mathematics Greatest Hits“, I have read and re-read and discovered a lot more about this album – it has even led me to a few other discoveries (guilty of using the internet on that one, though).  So, I can confidently say that the guy you see on the cover is in fact Charlie Murphy.  No credit is given to the MC heard on the record. I had to do some research and didn’t find much at first.  But I did finally come across this.

A very interesting story. Glad I stumbled across this album. The blog where I found the story behind the MC who is True Mathematics lead me to another record that I hadn’t previously heard. This guy…well, that’s for another day. Go buy an album and get credit for reading the credits. Happy digging!

Two thoughts popped into my mind when I caught wind of this new instrumental project by Batsauce. The first…I’m…