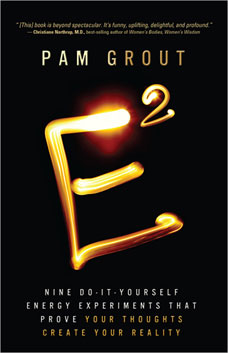 Several months ago I heard an advertisement for this book while listening to Hay House Radio. My immediate response was, “I need that book!” Being the book junkie that I am though, it isn’t (currently) in my budget to buy every book that sounds interesting to me. So I looked it up at the library. No copies. Drat!

Several weeks later, I spontaneously found myself browsing the Hay House site and came up on their blogger community. That, I now realize, was miracle #1. This community allows bloggers to receive copies of certain books for free in exchange for a review posted to the blogger’s website. I signed up for the program and received the book just a few days later.

If you’re into spirituality, the power of intention, quantum physics, or anything along those lines, you would love this book. It’s absolutely perfect for the person who has done extended reading on the topics (me!) but can’t manage to move beyond the feeling of being stuck. Sure you may come up on a little proof of the Universe working in your favor now and then, but it’s soon forgotten and sucked into the void of feeling like you have no power over your life.

This book provided me with the necessary guidance I needed to truly know that my thoughts have power through 9 simple exercises. The best part is, Ms. Pam Grout writes in a language that is accessible, humorous and the very opposite of boring. The lessons are concise, to the point, and best of all – offer NO ROOM FOR QUESTIONING. At the end of each experiment you KNOW that God heard your plea.

Ultimately, what these experiments aim to do is solidify our faith. You either believe or you don’t. You can’t be wishy washy and that’s where most of us get stuck. You also can’t send mixed signals… Like, “I really want to lose weight, but I also really want to have 10 pieces of chocolate cake today.” You have to be honest with yourself about what you really want. That’s the other place where we get stuck. We don’t truly know what we want.

Through practicing the experiments in this book, you can begin to hone in on what it is you’re truly asking for. As Grout states, begin with simple things first. Some things take longer than others. Don’t expect to become a millionaire over night. Also, keep your eyes and intuition open. You have to recognize that your question and desires have been answered. Sometimes the answers don’t come the way you wanted, or expected. Most important of all though, is don’t waiver in your belief. Most spiritual traditions teach this critical element and now it’s backed up by science. The observer creates and changes the observed. It’s true.

Finally, just to prove to you that I’m not just writing this for naught, I will share two stories about thoughts/things I manifested while going through the experiments in this book. The first one comes in the form of a Needak rebounder (a mini trampoline). I’ve wanted one for several years, and have had a cheap one in the past, that only lasted me about two months. I had only been reading E-Squared for a couple of hours when suddenly the word “rebounder” popped into my mind. A few minutes later I was on Craigslist where, lo and behold, someone was selling two Needak rebounders for half of their original price. I have NEVER seen a Needak on Craigslist in all the years I’ve been looking for one.

I now own the rebounder. And, just to add to the delight of the story, it’s worth noting that the person I bought it from – a total Craigslist stranger – was also very much into miracles, Wayne Dyer, and other things along this course. She even had the words, “I am entitled to miracles” written on her forearm. There’s no denying God in this equation.

The second example is a little more subtle. I happened to drop my camera right on it’s lens in the middle of my son’s birthday party. I had experienced trouble with the lens before and tried everything I could to fix it. I couldn’t. I was sure that this was it for my poor little camera, which I actually use for one of my jobs. Drat again! A little later in the day, one of the chapters was guiding me to manifest something specific, immediately my mind told me what I wanted, “a camera!”

A few minutes later I found myself on YouTube looking up instructions on how to fix my camera. Even though I had already given up on it. I pretty much thought I was about to take it apart and really ruin it. Instead I came up on a simple tutorial that said to slap the camera on your palm and gently guide the lens out. Can you believe this worked? Suddenly the lens that was absolutely stuck and would not move a millimeter was working just fine. I had a camera again. Sure, it wasn’t a new camera, but I gave the Universe 48 hours to give me a camera and I had one within 30 minutes. I accepted it with gratitude.

Please don’t think that the only thing you can manifest are material objects. These examples are important because we like to be able to see things physically. But we can also use this book to ask for guidance and to help manifest peace and love in our hearts – that’s where the real power lies. Like I said before, it’s really about cultivating and maintaining faith. So yeah, read this book. I got it for free, but if I knew then what I know now, I would have gladly paid for it. Thanks Pam Grout and thank you Hay House!

Buy it from Hay House or from Amazon.

We could all use a little more spice in our lives, right? Or maybe we just need to learn…